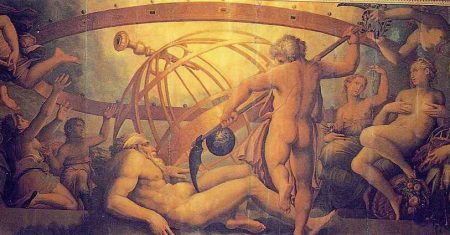 After she had children with Uranus, Gaia with vague and unsubstantiated charges incited his castration. Gaia said to the children she had with Uranus:

Children of mine and of a wicked father, obey me,
if you wish: we would avenge your father’s evil outrage.
For he was the first to devise unseemly deeds.

Mother, I would promise and perform this deed,
since I do not care at all about our evil-named father.
For he was the first to devise unseemly deeds.

Gaia rejoiced at her son’s willingness to commit horrible violence at her behest. She arranged for an ambush:

She placed him in ambush, concealing him from sight, and put into his hands
the jagged-toothed sickle, and she explained the whole trick to him.
Great Uranus came, bringing night with him. Spreading out around Earth
in his desire for love, he lay outstretched in all directions.
Then his son reached out from his ambush with his left hand,
and with his right hand he grasped
the monstrous sickle, long and jagged-toothed, and eagerly
he reaped the genitals from his dear father
and threw them behind him to be borne away. 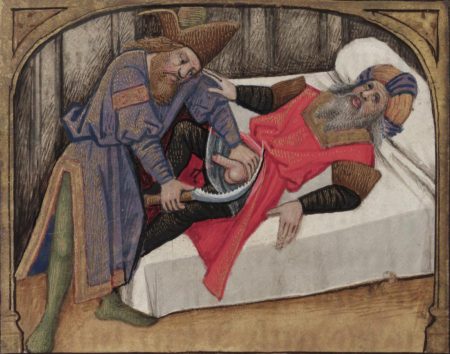 When Bernardus Silvestris wrote a new cosmogony in twelfth-century France, he confronted the castration culture that Hesiod’s Theogony described. As Roman culture developed with awareness of the earlier Greek culture, the Roman god Saturn assimilated the Greek god Cronus. Bernardus described Saturn as:

an ancient to be most strongly condemned, cruel and detestable in his wickedness, savagely inclined to harsh and bloody acts.

he {Saturn} mowed down with a blow of his sickle whatever was beautiful, whatever was flourishing. Just as he would not accept childbirth, so he forbade roses, lilies, and the other kinds of sweet-scented flowers to flourish.

Destroying gardens is a poetic metaphor for castration. Bernardus sought to create a new, more humane cosmos. His Cosmographia ends with creating man’s penis and celebrating the importance of the penis’s skillful work.

The mythic form his {Zeus’s} act of creation assumes completes the trend of the Theogony that began with Earth’s natural parthenogenetic capacity and ends with the male’s imitation of her. The seal is set on the finality of the transition from female dominance to male dominance by conscious male usurpation of her procreative functions, the basic source of her mystery and power.

Zeitlin (1996) p. 108. Students are now thoroughly indoctrinated with these threadbare clichés of anti-meninism:

Evidently, Hesiod merely reflected the opinions of his society onto his story of the gods’ creation of the universe, creating a justification for the philosophical opinions of the society in which he lived.

Could myths like the Theogony have been used to reinforce the patriarchy as it operated in ancient Greek society? It seems likely.

Pelos (2016). Of course it seems likely when you live in a Soviet-style indoctrination camp. See the praise for the good little apparatchik.

Ouranos {Uranus} sprawls over Gaia, covering her permanently, and discharges into her without stopping, imposing on her an incessant copulation—at least, at night (Theog. 176). There is neither spatial separation nor temporal interlude between them, in this union without pause.

The emasculation of Uranus is key to progress: it ends his sexual relationship with Gaea and explains in symbolic terms the separation between earth and sky.

Park (2014) p. 271. Castration also occurs in the earlier Hurrian-Hittite Kumarbi Cycle (Song of Kumarbi). In the Hittite version of that theogony (from the fourteenth or thirteenth century BGC), Kumarbi overthrows king Anu by biting off his genitals. For an English translation, Bachvarova (2013). Long-established castration culture has broad bite today in the broad criminalization of men’s sexuality.

While he presented castration culture, Hesiod himself seems not to have been an anti-meninist. Hesiod sought to provide men with prudent counsel in the work of their ordinary days:

Do not let a fancy-assed woman deceive your mind
by guilefully cajoling while she pokes into your granary:
whoever trusts a woman, trust swindlers.

Underscoring his condemnation of Saturn / Cronus for promoting castration culture, Bernardus describes “the barren and frozen wastes of Saturn {infecunda Saturni frigora}” as a place:

where the peace of the sky had been broken and shivered with chill and icy harshness.

Nor should priests be excused who are known to be fouling themselves with their sheep. Some have been castrated for this or put to death, whenever Fortune has wanted some amusement.

Bachvarova, Mary. 2013. “Translation of the Kumarbi Cycle, with Song of Hedammu separated into two different versions.” Pp. 139-63 in López-Ruiz, Carolina. Gods, heroes, and monsters: a sourcebook of Greek, Roman, and Near Eastern myths in translation. New York: Oxford University Press.

Zeitlin, Froma I. 1996. Playing the other: gender and society in classical Greek literature. Chicago: University of Chicago Press.