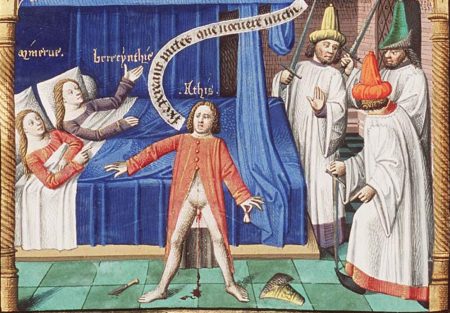 In northern France in the eleventh century, a young man and woman began living together without the legal bond of matrimony. That was then commonly considered a sin. The man resolved to go on a pilgrimage by himself to the Church of Saint James of Compostela in northwestern Spain. He went with “pious intention {piae intentionis}.”

The pilgrim couldn’t leave behind his desire for the woman. He brought with him her sash. He “abused it to remind him of her {eo pro ejus recordatione abutitur}.” In other words, he masturbated with it.

The Devil disguised as a vision of Saint James appeared to the pilgrim. The devil said to him:

I am James to whom you are hurrying, but you’re carrying with you something that greatly dishonors my honor. Until now you have wallowed in a pigsty of all-consuming fornication, meaning that you merely want to appear penitent. You proclaim you are making your way to my presence, as if it were the first fruit of conversion, but you are still bound up in the sash of that nasty little slut of yours.

The man confessed his wrong:

I know, lord, that in the past and even now have I have done works of the most shameful kind. Tell me, please, what advice you give to one journeying toward your mercy.

If you wish to make the fruits of your penance equal to the disgraceful acts you have committed, that member which is the source of your sin — your penis — cut it off in accordance with your faith in me and God. Then as for your life, which you have lived so poorly, take that away as well by slitting your throat.

Then the devil disappeared. The man was deeply troubled.

The above story ends in partial resurrection. Not understanding that the pilgrim had committed suicide (a sin), that man’s companions celebrated a funeral mass for him. After the Apostle Saint James implored the Virgin Mary, she interceded on the pilgrim’s behalf. God responded by resurrecting the dead pilgrim and healing the wound in his throat. God apparently intended for him to return to the world and denounce the misandristic devil of castration culture. Nonetheless, his penis wasn’t resurrected:

The shearing off of his lustful organ left only a little perforation, so to speak, for urination.

The story of the pilgrim who castrated himself and committed suicide is from Guibert of Nogent, Monodiae {Songs of Self} 3.19. Guibert reported hearing the story from Geoffrey II of Semur-en-Brionnais, who entered the monastery at Cluny about 1088. Geoffrey had been a feudal lord. He was the nephew of Abbot Hugh of Cluny. “The road of St. James {Camino de Santiago}” leading to St. James’s shrine in Santiago de Compostela was a popular medieval pilgrimage.

A version of the pilgrim story exists in “About the miracle of he who killed himself {De miraculo illius qui seipsum occidit},” Carmen 2 from works of Guaiferius of Salerno, an eleventh-century monk of Monte Cassino. Guaiferius’s poem doesn’t include the self-castration. However, a similar castration story is told about the pilgrim Gerald in the section “About the miracles of Saint James {De miraculis Sancti Jacobi}” of the twelfth-century Codex Calixtinus. John of Garland included the story in his Star of the Sea {Stella maris}, written in Paris in 1248 or 1249. For the history of this story within the miracles of the Virgin Mary, see legend 50 in Wilson (1946). The story was also adapted into Gonzalo de Berceo’s thirteenth-century Miracles of Our Lady {Milagros de Nuestra Señora}. Giles (2010).

In the story of the pilgrim Gerald, the partially resurrected pilgrim travels about the countryside. He shows off his lack of a penis and his perforation for urination. McAlhany & Rubenstein (2011) pp. 318-9, n. 105. That perhaps functions as bodily evidence of the truthfulness of the story. It also serves as a graphic warning to men.

Demons vying for the love of women, and also having intercourse with them, are amply attested in every place, and I would say more if I were not ashamed to.

Guibert, Monodiae 3.19. In Monodiae 1.13, Guibert describes the devil laying on top of Guibert’s mother in bed and thus apparently attempting to have intercourse with her,

Guibert, who lived from about 1060 to 1125, became the abbot at the monastery of Nogent-sous-Coucy in northern France. He had considerable classical learning. Guibert studied under the great philosopher and theologian Anselm of Bec.

Guibert completed his Monodiae in 1115. It apparently attracted little attention in the Middle Ages. No medieval manuscripts of it are known, nor do other works reference it. Guibert’s Monodiae has survived in full in only a seventeenth-century transcription, Paris BnF Baluze MS 42.

All the English quotes here of Guibert’s Monodiae are from McAlhany & Rubenstein 2011), with minor adaptations. Archambault (1996) provides an alternate translation. The translation of C.C. Swinton Bland (1925) is online, but it isn’t reliable stylistically or substantively. The best current Latin critical edition is Labande (1981). The earlier critical edition of Bourgin (1907) is available online. “Labande occasionally improves upon the excellent Bourgin Latin edition.” Archambault (1996) p. xxxvi. I’ve used the Bourgin Latin text since it’s consistent with the English translation and is more readily available.

[image] Attis castrates himself. Minerva and Cybele are lying in bed behind him. Illumination in Augustine, La Cité de Dieu (Vol. I), translated from the Latin by Raoul de Presles. Folio 43r in manuscript made in Paris c. 1475. The illuminator is known as Maïtre François. Preserved as Koninklijke Bibliotheek, The Hague, MS. MMW 10 A 11.

Wilson, Evelyn Faye. 1946. The Stella Maris of John of Garland, edited, together with a study of certain collections of Mary legends made in northern France in the twelfth and thirteenth centuries. Cambridge, Mass: Published jointly with Wellesley College by the Mediaeval Academy of America.

5 thoughts on “the devil’s misandry: “cut off your penis and kill yourself””