As if she were incapable of thinking about power differently, a widely acclaimed classicist speaking from the commanding heights of the symbolic economy declares that women’s voices are silenced. No one laughs. About three hundred years after a woman translated the Odyssey into French, the first woman with a first name that begins with a vowel translated the Odyssey into English. The nightingale Itylus sings mournfully for her dead son. Should we hope that a woman whose first name begins with a consonant will pioneer a new Odyssey translation that breaks from the dominant English meter and finally offers fresh insights into gender? We must overturn the intellectual hierarchy. A Homeric cento written in Late Antiquity offers reason for hope.

A woman wails as she throws herself upon
dear husband’s body. He has fallen in battle
before the town walls, ﬁghting to the last
to defend his city and protect his children.
As she sees him dying and gasping for breath,
she clings to him and shrieks, while behind her
soldiers prod their spears into her back,
and as they lead her away into slavery,
her tear-drenched face is a mask of pain.
So too wept Odysseus, pitiful in his grief.

Odysseus wasn’t weeping for the man, the husband who was killed. That husband was killed along with many other men in the horrific violence against men of the Trojan war. After Odysseus stopped weeping, he told an epic account in which he engaged in similar gender-specific killing:

From Ilion the wind took me to the Cicones
in Ismaros. I pillaged the town and killed the men.
The women and treasure that we took out,
I divided as fairly as I could among all hands

Kill the men and capture the women remains a dominant symbolic strategy in today’s democratic politics. Women’s lives have long been valued more highly than men’s lives. Today, about four times more men than women are murdered, yet violence against men generates no public concern. Violence against men is normalized and obscured as merely violence. 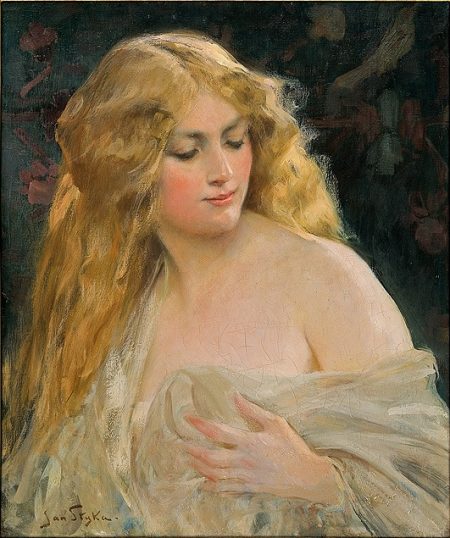 Even while anti-sexual Stalinism is descending on decaying democracies, few dare speak about sexual violence against men. In the Odyssey, the goddess Calypso held Odysseus by force and had sex with him repeatedly against his will. Echoing the sexual violence of castration culture at the origin of the cosmos, Odysseus enters the epic weeping while being held captive in sexual servitude:

I saw him on an island, shedding salt tears,
in the halls of Calypso, who keeps him there
against his will. He has no way to get home.

The god Zeus, showing more concern for men being raped than many do today, ordered that Calypso let Odysseus leave. When Hermes arrived conveying that order, Calypso was singing and weaving within her vast cave in a remote, isolated place of natural pleasure, at least for her. Calypso declared that she had made Odysseus her “bed-companion {ἀκοίτης}.” He was an unwilling bed-companion. Calypso went to speak with Odysseus:

She found him sitting where the breakers rolled in.
His eyes were perpetually wet with tears now,
his life draining away in homesickness.
The nymph had long since ceased to please.
He still slept with her at night in her cavern,
an unwilling lover mated to her eager embrace.
Days he spent sitting on the rocks by the breakers,
staring out to sea with hollow, salt-rimmed eyes.

Calypso told Odysseus that now she willing to let him go home. She deceptively mentioned nothing of Zeus’s order. Like a husband who had endured years of lies and verbal abuse from his wife, Odysseus was suspicious of Calypso’s motives and statements. He insisted that Calypso swear a binding oath that she wasn’t plotting some new intrigue to harm him. So she did. She didn’t break her oath. She sent Odysseus on his way home with a favorable wind, warm and gentle.[2] 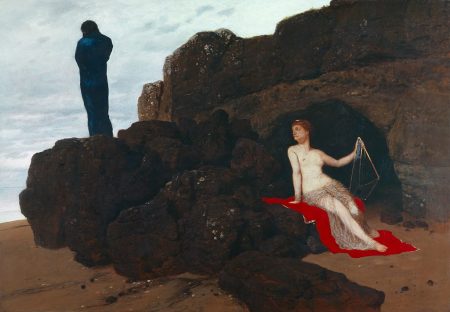 More prevalent than rape of men is brutalization of men’s sexuality. Reflected today in the huge gender protrusion among persons incarcerated and laws criminalizing men seducing women, a man’s sexuality is readily represented as a vicious attack upon a woman. A Late-Antique poem drew upon epic Greek phrases from the battle between Amazon warrior-women and Greek warrior-men to figure brutally men’s sexuality:

Swiftly he pierced the god-like maiden. His stout spear went right through her belly and dark blood spurted out, and her dear bed was stained. With sharp spear he pierced the maid between her thighs, her with the fair ankles, unwed, and cut through her blood-filled veins, and the dark blood bubbled swiftly through the wound that had been dealt, and the sinewy spear brought her low.

Widely read newspapers deceptively reported that a nearly 25% of Asian-Pacific men admitted to raping women. Many persons probably believed that claim. Who would believe that Sabina and Ausonius, wife and husband, loved each other?

My cruel-hearted mother, an evil mother to me;
it pains me much, the wound that a mortal man inflicted on me
in the dark night when other mortals sleep.
Naked, without a helmet and shield, nor had he a spear,
and all his sword was bathed in hot blood, but afterwards
he sent forth a favorable wind, warm and gentle.

The poem seems to tell a reluctant bride’s story of her wedding night. The bride blames her mother for forcing her into marriage. The middle four lines figure the penis as a sword in painful, wounding sexual intercourse. But the final line expresses appreciation for the groom’s erection labor.

This poem should be appreciated as a Homeric cento subverting dominant gender representations. A meaningful relationship exists between the underlying Homeric source text (hypotext) and the surface text of the poem (hypertext). The six lines of the poem have the following Homeric sources:

The first and last lines of the poem reverse the gender of the subject. In the first line, the wife, not the son, disparages the mother. In the final line, the groom, not the goddess Calypso, provides a helpful, gentle, warm flow. Yet a concluding difference is telling. Calypso actually dominated and raped Odysseus, despite classical scholars longstanding blindness to that clear representation. The husband is figured as brutalizing his bride on their wedding night, yet that figure is only a shallow, conventional representation. The Homeric cento ingeniously encodes a subversive thrust against poetically stale and oppressive representations of men’s sexuality.[5]

The starting point for Odysseus’s journey home is revealed in the very beginning of the Odyssey:

Calypso detains the poor man in his grief,
sweet-talking him constantly, trying to charm him
into forgetting Ithaca. But Odysseus,
longing to see even the smoke curling up
from his land, simply wants to die.

Odyssey 1.55-59(partial). Odysseus’s son Telemachus subsequently learns that Proteus told Menelaus that Calypso was holding Odysseus by force. Calypso held Odysseus captive for seven years. She had been raping him for a long time. When Hermes arrived at Calypso’s cave,

Odysseus was sitting on the shore,
as ever those days, honing his heart’s sorrow,
staring out to sea with hollow, salt-rimmed eyes.

Odyssey 5.81-3. This passage echoes Proteus’s description of Odysseus weeping in Odyssey 4.556-8. It emphasizes Odysseus’s grief from Calypso’s sexual violence against him. Calypso boasted that she, a goddess, was more beautiful than his wife Penelope. Odysseus, however, preferred having mutually loving sex with Penelope.

[2] Calypso is among “passionate models of female power” to a professor writing from a pinnacle of symbolic power:

The divine Calypso, Aphrodite, and Circe provide passionate models of female power — idealized fantasies of how much agency mortal women might have, if only social circumstances were completely different.

Watson (2017). Women already have astonishing power to escape punishment for raping men and boys. Only through suppressing thought of gynocentrism does this authority have true insight into Homer:

I read Homer’s great poem as a complex and truthful articulation of gender dynamics that continue to haunt us.

Id. Another authority ran the standard gynocentric trick of making the victimization of men be about women:

At the opening of the poem Odysseus languishes on the island of Ogygia, transfixed by the spellbinding words of Calypso (1.56-58), who also compels him to have sex with her — a very obvious conflation of the twin dangers of women’s language and sexuality.

McCarter questioned, “Is Homer’s Calypso a Feminist Icon or a Rapist?” The correct answer is both. McCarter shows little concern about women raping men. Her primary concern is how Homer’s Calypso relates to “feminist potential” and “feminist empowerment.” McCarter (2018).

This poem has an anonymous attribution in the manuscript. Cameron attributes it to the same period as the ninth-century polymath Leo the Philosopher / Leo the Mathematician. Cameron (1992) p. 173, n. 14. But it would be a highly unusual Byzantine poem. It may have been written centuries earlier. Lauxtermann (2003) p. 101.

The first two lines are nearly identical to Quintus Smyrnaeus, Posthomerica 1.235-6. Thematically, the whole poem is similarly to Posthomerica 1.235-43. The language of the Posthomerica is drawn largely from Homer’s work. However, as Sternbach (1890) pp. 7-11 makes clear, this poem is not a Homeric cento, nor is it a cento, strictly speaking.

[4] Greek Anthology 9.361, Greek text and English translation (adapted slightly) from Paton (1920). The manuscripts attribute the poem to “Leo the Philosopher {Λέοντος Φιλοσόφου}.” Lauxtermann describes it as a “late antique” Homeric cento that “cannot have been written by Leo the Philosopher.” Lauxtermann (2003) p. 101. Cameron believes Leo wrote it. Cameron (1992) pp. 172-3.

Lauxtermann described this Homeric cento as “a girl’s complaint about the painful experience of her defloration.” He further characterized it as having a “scabrous subject.” Lauxtermann (2003) p. 101. Sex, of course, is a subject central to the evolution of species. Moreover, sex is vitally important in the everyday lives of a large share of adults. The term “defloration” pejoratively characterizes a woman’s first heterosexual intercourse of reproductive type. It reflects the symbolic brutalization of men’s sexuality.

A long-established critical tradition speaks of the ‘ivory tower’ of the late antique poets (and especially of Nonnus and his ‘school’), stressing the literary side of their activity. As for myself, I am firmly convinced this is only one side of the coin and that we cannot float on the calm surface of literary analysis without considering the possible reactions of Nonnus’ contemporary audience.

Agosti (2014) p. 312. The Homeric cento on a wedding night is an ingenious, socially engaged literary work. It should be interpreted with appreciation for the dominant pattern of representing men’s sexuality, gynocentrism, and the transgressive tradition of Ausonius’s Wedding Cento.

Recent study has shown that Homeric verses had a variety of applications. On using Homeric verses for divination, Martín-Hernández (2013). See similarly the oracles of Astrampsychus. Context of use is critical for interpretation:

Any interpretation of the homeromanteion as it currently survives is based on the reciprocity of answer and question, a concept which invites us to ask to what inquiries the homeromanteion responded; how, more precisely, Homer’s lines were used from a performance perspective; and how meaning was further constructed.