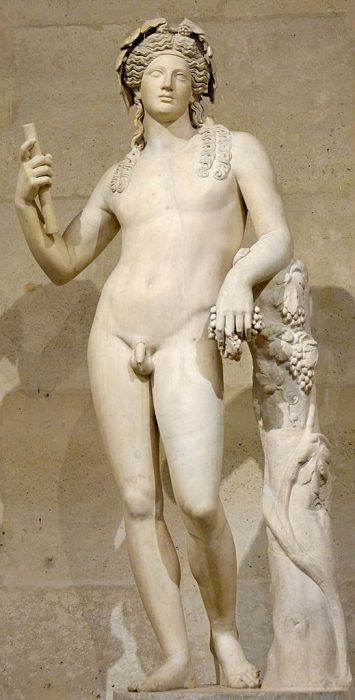 The old woman Maryllis hadn’t laughed or danced for eight years. She was a single mother, and her son’s death had crushed her spirit and judgment. How could she not now hate young men? So it might be for college officials who staff today’s tyrannical college sex tribunals. Is there any hope for them?

like ivy clinging to an oak, they kissed each other gladly.
So difficult was their embrace to bring to an end
that it occurred to Maryllis
that the two had indeed become one body
who in speech had become one soul.
Thus it is with every lover who is redolent with desire;
for when after a long time he sees her whom he desires,
he kisses her insatiably until his desire is assuaged. [1]

Did Charikles ask Drosilla for affirmative consent before he embraced and kissed her? No sane person would even ask that question.

Drosilla and Charikles’s passionate love astonished and delighted Maryllis. She had never before encountered a passionately loving couple, nor experienced such passion herself. She exclaimed:

What a novel sight I see, strangers!
For I am an old woman and advanced in age,
and I have had experience of much good and evil,
but I have never known such desire

She generously prepared for the couple and other guests a feast (symposium) in honor of Dionysos, the god of revelry. She even danced for them:

she got up from her seat
and, being already prepared for this,
took a napkin in both hands
and began a somewhat Bacchic dance,
producing a snuffling sound,
which initiated festivity and instigated mirth.
However, the constant gyrations quickly
tripped Maryllis up in her movements
and so the poor wretch fell over
with her legs in a tangle;
she promptly lifted her feet over her head
and pushed her head into the ground.
The symposiasts let out a huge guffaw.
Old Maryllis lay where she fell
and farted three times,
because she could not bear the pressure on her head.
She did not get up — the poor wretch
said she could not, and lying there
she held out her hands to the young men.

Her gesture represents welcoming men to participate in masculine social-educational activities. Maryllis’s performance generated joy, laughter, and a sense of hospitality. That’s often lacking in educational institutions that sexually persecute men. One young man, sympathetically concerned that “she might go one better and foul herself,” helped Maryllis to an upright posture.[2] All experienced great pleasure. None was subsequently punished, and there was no subsequent expulsion.

The twelfth-century Byzantine novel Drosilla and Charikles ends with passionate education. The young couple married.[3] Then they spent the night together:

and the girl who in the evening was a virgin,
arose from her bed in the morning a woman.

[1] Niketas Eugenianos, Drosilla and Charikles 7.230-7, from Atticizing Greek trans. Jeffreys (2012) p. 438. This novel is in nine books of twelve-syllable verse lines. Eugenianos apparently wrote it about 1156. It survives in four manuscripts. That suggest that it “did not attract the interest of {pre-eighteenth-century} western humanists.” Drosilla and Charikles includes considerable intertextuality with the earlier Byzantine novel Rhodanthe and Dosikles. Id. pp. 343-4, 348-9.

[2] The “snuffling sound” refers to “a song that is as melodic as the noise of someone who blows her nose.” Roilos (2005) p. 288 (Ch. 4). In contrast to more repressive norms in liberal democracies today, elite Byzantine culture enjoyed ludic and sarcastic references to bodily functions such as snuffling, farting and defecating. Garland (1990a) p. 27. Constantine V, Byzantine emperor from 741 to 775, was known as Kopronymos (crap named) by his detractors. He alleged disgraced himself by defecating in the holy font at his baptism. Id. p. 14. When the Byzantines were besieging a fortress at Zemun (in present-day Belgrade), a strong, independent, elderly Serbian woman reportedly assailed the Byzantine forces:

standing atop the {fortress} walls, {she} threw down filth; indecently pulling up her garments and turning around, she displayed her rear to the Romans’ {Byzantine} army; while singing some endless babble, she thought to bind the Romans with a diabolical spell

Id., p. 16, citing the account of the Byzantine historian Joannes Kinnamos. The Byzantine forces killed the woman with an arrow shot into her ass.

While Maryllis’s performance is obviously funny, it has greater significance. It shows the realism emerging in twelfth-century Byzantine fiction. Within the literary structure of Drosilla and Charikles, “Baryllis’ {Maryllis’} performance should be viewed as a grotesque reenactment of the conviviality of the happy feast that marked the first meeting of the two protagonists.{3.101-338}” Roilos (2005) p. 291. Maryllis’s performance also has a more universal allegorical dimension in its re-vitalization of a dour, old woman who poorly understands young persons’ love.

[4] On the functioning of college sex codes and college sex tribunals, Gersen & Suk (2016).

Garland, Lynda. 1990a. “‘And His Bald Head Shone Like a Full Moon …’ : an appreciation of the Byzantine sense of humour as recorded in historical sources of the eleventh and twelfth Centuries.” Parergon. 8 (1): 1-31.

Garland, Lynda. 1995. “‘How Different, How Very Different from the Home Life of Our Own Dear Queen,’ Sexual Morality at the Late Byzantine Court with Especial Reference to the 11th and 12th Centuries.” Byzantine Studies / Études Byzantines 1–2: 1–62.