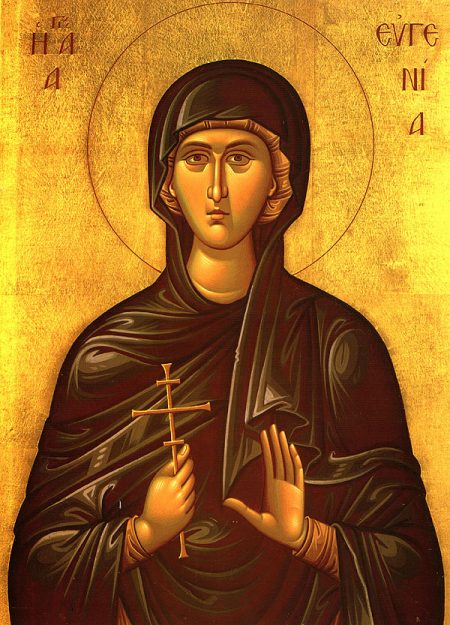 After Eugenia had spent only three years as a monk, her monk-brethren elected her abbot of their monastery near Alexandria in the second-century Roman Empire. The monks regarded Eugenia as first in virtue among them. They also admired her modesty and love for everyone. When she entered the monastery, she brought with her two eunuchs who had served her in her former life of female privilege. The eunuchs became monks and strove to imitate Eugenia from their advantageous position relative to the other men in the monastery.

Seeking healing from a terrible illness, a rich woman named Melanthia came to the abbot Eugenia. Eugenia was renowned for healing. With her own hands, Eugenia anointed Melanthia with holy oil. Melanthia was thus cured.

Melanthia subsequently became sick again. This time she was sick with lovesickness for Eugenia:

upon seeing a man, youthful in appearance and beautiful in his face, desire (albeit not a degenerate sort) entered her, and little by little, her soul was seduced. Soon, she was burning intensely, thinking that Eugenia could not remain chaste forever [1]

Melanthia summoned Eugenia to heal her of her sickness. Melanthia wasn’t coy about seeking a cure:

she urged eagerly for an illicit union; “And if you do not want this,” she said, “then I shall take you openly as my husband by law; and you will be the lord of great wealth, gold, silver, fine clothing, fields, herds, and slaves, and together with these things, you will also have me as your slave rather than a woman who is free and of equal worth. And you alone will take pleasure in these things in every way, for I am without husband, children or relatives.” [2]

Most men have to work for a living. Some men who are married live in addition as little more than personal servants and handymen for their wives. Many husbands face the horrors of sexless marriage. Given these realities, many men would find Melanthia’s offer to be highly appealing.

Finally, becoming dizzy with Melanthia’s excessive prattling, she plugged her ears with wax, as the saying goes, unable to tolerate even the sound of another word. “Stop,” she yelled, “woman, stop, and keep these things far from me; you are spewing at me the very venom of the ancient serpent. … For me the only wedlock is yearning for Christ; my only wealth is heavenly goods; my only possession is knowledge of the truth.”

Unlike men, women have little life experience of romantic rejection. Much more than men, women feel entitled to the love of any man. Melanthia had expected Eugenia to accept her love proposition.

When Eugenia rejected her, Melanthia’s love turned to hate. She sought to use criminal justice, which has long had strong anti-men bias, to punish Eugenia:

bursting with terrible fury against Eugenia, she left for Alexandria. Then, she also devised a terrible and false accusation against her and went to the eparch Philip, since she knew nothing about Eugenia, neither that Philip was Eugenia’s father, nor that she had changed her appearance from that of a woman to that of a man. [3]

Before the eparch Philip, Melanthia lodged against Eugenia the gravely serious charge of attempted rape:

he {Eugenia} approached me. Thinking that I was one of those indecent women, that brazen man first used deceitful words and then assaulted me with his hands. If I had not called out loudly, causing my handmaid to come running, I too would now be defiled as if I were a slave woman.

Just hearing this charge enraged Philip against Eugenia. Like a college president condemning a whole fraternity after a sexual charge against only one member, Philip ordered that Eugenia and all her fellow monks be brought before him in chains. Like tyrannical college sex police today, this tribunal didn’t make a fair and thorough fact-finding. The judges largely condemned Eugenia and her brethren by default.

The punishment of Eugenia was procedurally similarly to the punishment of college men accused of kissing girls without affirmative consent and other such sex crimes. In short, it was an exercise of mob justice:

whole multitudes gathered from the surrounding cities and the eparch came too. Eugenia was led into their midst, dragged along with the heaviest of chains; shouts erupted from every corner of the amphitheater; all with one accord declared that Eugenia must die. Wild beasts were readied; instruments of torture were prepared, wheels, fire, other types of punishment, and above all, the harsh torturers, most savage and quick in the exacting of vengeance.

When Eugenia came before the eparch Philip, he harshly condemned her to death. Eugenia, wanting to make clear the extent of the conspiracy of lies against her, called Melanthia’s maidservant to speak about what happened. The maidservant declared:

This depraved man many times assaulted me as well. Then his habitual lasciviousness convinced him to impose his mad lust even on my mistress herself, forcing himself on her against her will, until she cried out as loud as she could and I came to her help, and with my fellow slave women, whom I had called to my aid, we were barely able to restrain him from his shameless attack; and if you want to summon them, you will see how they concur with my statement.

Then, in a way that no man could, Eugenia decisively refuted the women’s false accusations of rape:

{Eugenia said,} “It is time to speak the truth boldly, so that her lies may no longer exult over the truth and so that the Christian faith may not be misrepresented by the Greeks.” Then what does she do? She was forced by the great shamelessness of her accuser to do something beyond the bounds of modesty; grabbing her tunic she ripped it apart from top to bottom; and, exposing certain parts of her truly holy body, she showed everyone that both by nature and in truth she was a woman.

In ripping her tunic from top to bottom, Eugenia re-enacted the tearing of the curtain of the temple at Jesus’s crucifixion.[4] She also re-enacted Phyrne exposing her breasts to a Roman jury to gain acquittal on a serious charge. Eugenia refuted the false accusation of rape by showing that her accusers falsely thought that she was a man. Yet none of her accusers directly claimed knowledge of Eugenia’s alleged penis. The decisive refutation of the false accusation rested at least in part on the myth that women don’t rape women. That’s a myth like the myth that women don’t rape men.

False accusations of rape have been recognized as a serious problem throughout all of recorded history, except for recent decades. A false accusation of rape can do terrible harm to a man. Yet the currently dominant ideology has grotesquely trivialized the problem of false accusations. Men falsely accused of rape today have little worldly hope. They can only pray that the early Christian Saint Eugenia, along with Saint Marina, the patron saint for men falsely accused of rape, will intercede for them.

Metaphrastes probably wrote his Menologion in late tenth-century Constantinople. Metaphrastes “often chose sexually loaded legends for his collection.” Kazhdan (2006) p. 242. For his account of Eugenia, Metaphrastes drew upon a much earlier Greek and Latin tradition. Eugenia now is regarded as a saint. She is honored on December 24 in the Orthodox Christian calendar.

[2] The narrator suggests that Melanthia intended, if necessary, to rape Eugenia:

the shameless Melanthia dared to attribute her own loathsome behavior to the pure Eugenia, and pretended that she had suffered the very fate she herself had intended to inflict.

[3] Eugenia had secretly left home. She entered the monastery without informing her parents of her whereabouts and intentions.

[image] Icon of Saint Eugenia, made about 1900. Image thanks to Wikimedia Commons.