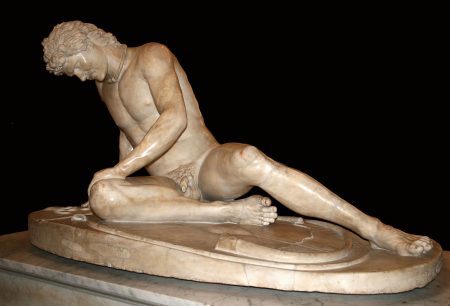 In 396 GC, nomadic men warriors from central Asia besieged Edessa. Within that ancient cultural capital lived the pious widow Sophia (which means wisdom) and her beautiful daughter Euphemia (which means pleasant-sounding). The Romans brought Goths into Edessa to help defend the city. The Romans regarded the Goths as barbarians like the men besieging the city. To the Romans, barbarians lacked wisdom from classical Greco-Roman and Christian learning. Barbarians spoke harsh-sounding languages. Worst of all, barbarian men, unlike the Roman elite, were strong, fearless, and heterosexually vigorous.[1] Barbarian men were courtly eunuchs’ worst nightmare.

having come with sinister step to my own house, the Goth, barbarous in mind, forsworn in his speech, given over almost entirely to sexual desire, saw me, a maiden keeping house as a maiden does, and being completely maidenly in my sober demeanor, my judgment, and my comportment. And he, when he saw me, his eyes melted and his whole heart was inflamed with burning desire. But I did not know the danger that I was facing lurking within his very countenance or the misfortunes that were buried in the midst of his handsomeness. [2]

Despite knowing that the Goth is a barbarian and describing his barbarian characteristics, Euphemia didn’t perceive the danger he presented. She sensed “his handsomeness.” She also noted that the Goth was “one who was so obedient to his sexual urges and fanned by all the winds of desire.” Barbarian men weren’t the sort of men who would have sexless marriages. Barbarian men aspired to be as fecund as Genghis Khan.[3]

With her mother’s reluctant permission, Euphemia married the Goth. That marriage was for Euphemia a peaceful haven amid the siege of Edessa. Euphemia perceived that her husband had genuine affection for her:

The Goth was a loving husband in every respect, and for me he became everything that a good husband might be for a wife.

Euphemia and the Goth conceived a child. Many Roman women would have regarded with envy Euphemia’s marriage to the Goth.

Eupphemia and the Goth’s marriage existed under the shadow of gynocentrism. Accounts of the development of their relationship tell of the Goth giving expensive jewelry to Euphemia’s mother.[4] That reflects the gynocentric norm that men must provide material goods in exchange for love. To gain permission to marry Euphemia, the Goth “became my mother’s slave completely, both in speech and in appearance.” Moreover, the Goth pledged in marrying Euphemia, “I will be ready to fulfill her every wish.”[5] Men’s subservience to women isn’t a good foundation for joyful, enduring marriage.

The marriage of Euphemia and the Goth ended horribly. The Goth had endured great danger to earn a living fighting for the Romans in Edessa. When the barbarian siege of Edessa lifted, the Goth’s job ceased to exist. Underscoring the economic insecurity that plagues men’s lives, the Goth seems to have been forced to return to his home town and his Gothic abusive wife. Apparently not wanting to shame Euphemia by abandoning her, he brought Euphemia with him to be a servant to his Gothic wife.

The girl’s unlawful mistress was jealous of her and would abuse her, ordering her to perform the most onerous tasks, as if the girl’s labors could provide relief from the jealousy that burned within her. And the worst evil was that she would not even deign to speak to her. When with time she found out that the maiden was also pregnant, the flame of her jealousy was kindled even more, and she would demand that she do the heaviest work. Why did she do that? She was striving to bring about the maiden’s death by a premature abortion of the fetus. [8]

The spiral of women-driven violence continued. In retribution for the Gothic wife poisoning Euphemia’s son, Euphemia poisoned the Gothic wife. Her relatives correctly blamed Euphemia for that crime. They enclosed Euphemia in a tomb with stinking corpses for a night. They intended to bring her out the next morning and impale her on a stake and shoot arrows at her.[10]

The Goth eventually was punished for his acts. He was lured into a trap in Edessa and apprehended. The military commander of Edessa ordered an annihilating punishment with a gynocentric flourish:

{he} ordered that his head be cut off with a sword and his body thrown into the flames, so that neither his dust touch dust, nor be given to the earth, the common mother of all [11]

Perhaps recognizing anti-men bias in criminal punishment, a bishop intervened and pleaded for fairness for the Goth.[12] The commander thus rescinded his order that the Goth’s body be burned and had him only beheaded. No account records any punishment of the Gothic wife.

The story of Euphemia and the Goth has enduring relevance. The barbarian lover continues to be a figure that dominant ideology condemns and that many women erotically desire. Collapse of civilization may be tragically the only way to make civilization truly welcoming to barbarians and to eliminate anti-men bias in criminal punishment.

The grouped characteristics “barbarity, crudeness, and strong, soldierly masculinity” of the Goths … was opposed to Romanitas and its positive values

[2] Nikephoros Basilakes, Progymnasmata Ethopoeiae 27.1 (“What the girl from Edessa would say after being deceived by the Goth”), from Greek trans. Beneker & Gibson (2016) p. 323 (Greek on facing pages). I’ve made non-substantial changes to the translation to make it more readily understandable. Subsequent quotes from this ethopoeia are (cited by paragraph and page in id.): 2, p. 325 (one so obedient to his sexual urges…); 3, pp. 325, 327 (The Goth was a loving husband…); 2, p. 325 (became my mother’s slave…).

Edessa is now Urfa in present-day Turkey. The story of Euphemia and the Goth goes back at least to a Syriac version probably from the fifth century. Burkitt (1913) provides the Syriac text and translation. On dating the story, , Charis & Papaioannou (2013) pp. 26-32.

[3] Genghis Khan and his relatives contributed to the conceptions of many children. Worldwide, 0.5% of persons are lineal descendants of Genghis Khan. Zerjal et al. (2003).

one of the days when the baby was crawling along it cuddled up against her supposing that she was its mother, and threw itself upon her; and she forthwith became exceedingly embittered.

[10] The Syriac version provides these final details. Para. 24, trans. Burkitt (1913) p. 141. That version also notes that the people dragged Euphemia to the tomb and beat her while doing so. Id.

[12] The intriguing figure of the interceding bishop is similarly present in the Syriac version.

[image] A barbarian: the dying Gaul. Marble sculpture from the first century BGC, made as a replica of a sculpture dedicated to Pergamon by Attalus I to commemorate the victories over the Galatians in the 3rd and 2nd centuries BGC. Held in the Capitoline Museums (Rome), Palazzo Nuovo, first floor, Hall of the Galatian (accession # S 747). Cropped version of a photo by Jean-Pol Grandmont, generously contributed to Wikimedia Commons.

Burkitt, Francis C., ed. and trans. 1913. Euphemia and the Goth: with the acts of the martyrdom of the confessors of Edessa. London: Williams and Norgate.

One thought on “barbarian lover: Goth as good husband to Euphemia”