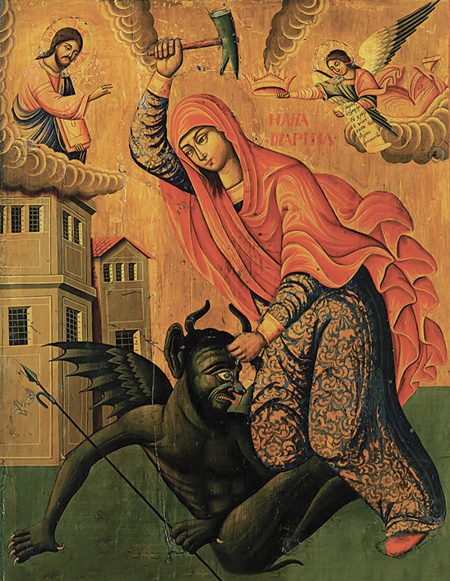 A mass-market book, co-authored by an eminent anthropologist and published in 1996, demonized males. While demonizing and pathologizing men signals social virtue today, demonizing women would probably be regarded as a hate crime. That wasn’t the case in more liberal and tolerant Byzantine society. In his Secret History, the leading sixth-century Byzantine historian Procopius demonized both Empress Theodora and Emperor Justinian. Yet, revealing a deep pattern of gynocentric society, Procopius demonized Justinian much more extensively than he did Theodora. More than a millennium later, Victorien Sardou’s play Théodora was a smash-hit in Paris. That play makes clear that convincingly demonizing a woman is scarcely feasible in a broadly popular work.

According to Procopius, Theodora and Justinian were demons. The two of them together were demons:

both to me and also to many of us these two never seemed to be human beings at all but rather murderous demons of some kind, or as the poets would say, “a baneful pair they were for all mortal humans,” who conspired together for the purpose of destroying all the nations and the works of men as efficiently and quickly as possible. They put on a human form, thereby becoming human-demons, and in this way demolished the entire world. … {“these two people”} devastated all of humankind and visited disaster upon the entire inhabited world, no one being able to accomplish this except for these two people. … they worked this evil through a power that was not human, for it had a different source. [1]

Men are no more inherently evil than are women. In eleventh-century Byzantium, leading public intellectual Michael Psellos asserted the moral and intellectual equality of women and men. That idea of gender equality commands widespread public assent around the world today. Regarding Theodora and Justinian as equally demonic rightly suggests that evil has no particular gender.

In practice, men are demonized much more extensively than women are. After describing both Theodora and Justinian as demons, Procopius elaborated upon the demonic character of only Justinian. Procopius reported that a demonic creature was thought to have cuckolded Justinian’s father and was thought to be Justinian’s actual, biological father. Some persons reportedly saw Justinian walking headless about the imperial palace. On one occasion, a courtier looked upon the seated Justinian and said that he saw:

his face suddenly became like shapeless flesh: there were neither eyebrows nor eyes in the places where those things should have been, nor did his face show any other features at all. In time, however, he saw the shape of his face return. [2]

Men historically have been regarded as the generic human being “man.” Men in their sexual distinctiveness have thus been historically diminished. Procopius depicted Justinian as a person who could instantly lose his head or his face. That demonizes the already dehumanized-demasculinized man.

Although Procopius extensively characterized Theodora as a woman, he didn’t thoroughly demonize her. She would “slip into the bed with the Lord of Demons” and so become only his wife. After recounting massive deaths in publicly institutionalized men-on-men violence (war), Procopius declared:

That, then, was what befell the whole of humanity while this demon held human form, and he caused all of it, as he was emperor. I will now relate all the evils that he inflicted on humankind through his occult power and demonic nature. [3]

Despite women’s central role in causing and sustaining wars, Procopius blamed only Justinian for the wars of Byzantium. Procopius attributed floods, earthquakes, and plagues to the occult and demonic nature of only Justinian. With respect to Theodora, Procopius reported:

It is said, moreover, that she had managed to subdue Justinian to her will not by fawning on him but by the coercive power of demons. … given he was so vulnerable to witchcraft, as I just said, Theodora easily put him under her thumb.

The Emperor Justinian was under the thumb of the Empress Theodora. Credit for his successes belongs to his wife. But Justinian alone is  responsible for all evil. In similar thinking, the disproportionate share of men among privileged elites results from odious discrimination, but the much more disproportionate share of men among incarcerated persons is no cause for concern. 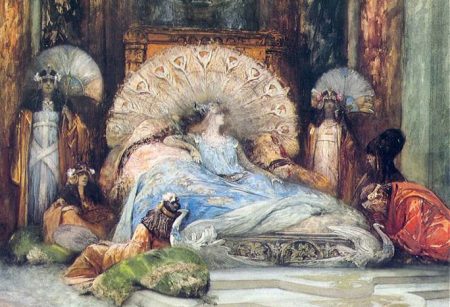 In Paris in 1884, the demonic Theodora was the star of Victorien Sardou’s play Théodora. Amid grand stage-sets depicting the imperial Byzantine palace, Theodora wore many custom-made, lavishly bejeweled costumes. One of her dresses was made from:

bleu de ciel {sky-blue} satin, with a train four yards long, covered with embroidered peacocks with ruby eyes and feathers of emeralds and sapphires. It was the work of the most cunning embroiderers in Paris, and was a perfect mosaic of precious stones. [4]

Yearning for freedom in her oppressive position as Empress, the Theodora of this play would sneak out of the palace at night in disguise to mix with gladiators and chariot-riders and to enjoy a passionate extra-marital sexual affair. She of course despised her husband the Emperor Justinian, who was depicted as “not terribly bright.”[5] But she was intensely loyal to her non-royal lover. When a captured conspirator might have revealed her affair, she killed him by stabbing him in the heart with one of her gold hair-pins. After her lover died of poison that she accidentally gave him and her husband discovered her infidelity, she was condemned to death among public chaos. Like many women, she nobly submitted to having a court eunuch strangle her with a red silk cord as Constantinople went up in flames.[6]

The Theodora of Sardou’s Théodora was massively attractive to women and men. Sarah Bernhardt, a famous actress who herself was the daughter of a prostitute, starred as Theodora. The play ran in Paris for an unprecedented 257 consecutive showings at high ticket prices and generated enormous revenue. The play then went on a world tour, with Sarah Bernhardt appearing as Theodora nearly nine hundred times.[7] For a 1888 adaption presented in the Gilliss Opera House in Kansas City, Lilian Olcott “purchased in Paris exact duplicates of the costumes, properties and all other material, as the French express it, as used in the original production.”[8] Théodora was revived in Paris at the Sarah-Bernhardt Theatre in 1902 and was even more successful than at its premiere. Théodora was made into multiple silent films between 1900 and 1930. The most successful silent film was the Italian Cinematographic Union’s 1922 Theodora. That high-budget film, which included thousands of extras, was touted as “Sardou’s Famous and Sensational Love Romance” and “The Greatest Screen Spectacle the World Has Ever Known.”[9] 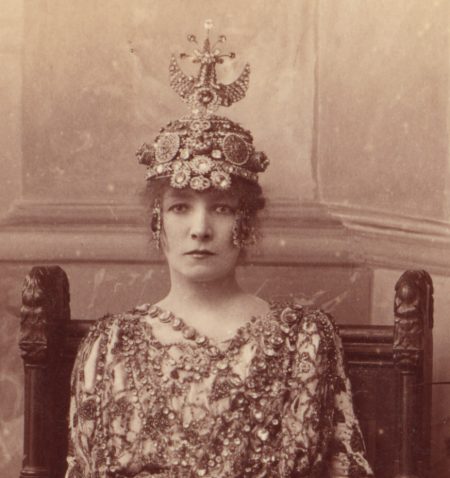 While men are readily demonized, demonizing women is scarcely feasible. Procopius elaborated upon the demonic character of Justinian, but he didn’t characterize Theodora as the “Lady of Demons.” As a scholar recently commented, “we all get the Theodora we deserve.”[10] Because most men act like Justinian’s General Belisarius and most women are obsessed with their own oppressed wonderfulness, we have as our woman-hero the Theodora of Victorien Sardou’s Théodora.

[1] Procopius of Caesarea, Secret History 12.14,16,17, from Greek trans. Kaldellis (2010) p. 58, with some changes. Kaldellis translated ἀνθρωποδαίμονες as “man-demons.” The translation of Dewing (1935) and the translation of Atwater (1927) made the same gendered choice. The Greek ἀνθρωπο can mean either male human beings or human beings in general. In context, “man-demons” characterizes “they,” meaning Justinian and Theodora. Hence “human-demons” is a better translation. That’s what I’ve used above. In Kaldellis’s translation, I’ve also changed “mortal men” to “mortal humans” and “mankind” to “humankind” to better translate the gendered context. Jeffreys’s translation of Digenis Akritis made a similar mistake in translating an important passage. See note [3] in my post on Byzantine matriarchy devaluing men’s lives. Kaldellis and Jeffreys are leading translators of Byzantine texts. Their translation failings show the pressing need for more concern for men among Byzantine scholars.

Sardou brought real lions onto the stage for Théodora at the Porte Saint-Martin in Paris. The performance at the Gilliss in Kansas City originally had a papier-mâché lion. However, the drama editor for the Kansas City Times, David Austin Latchaw, suggested that his friend’s Great Dane might pass for a mountain lion and be an improvement. That dog was thus engaged for the remaining performances. He became a noted member of the cast:

At the Wednesday matinee, the dog prowled the cage convincingly until Olcott’s entrance. Having become fond of her, the dog easily got out of the cage that had been constructed for the inanimate lion. When Olcott sat down on a tree stump, the Great Dane crossed to “put his weighty head into her lap and refused to budge.” She stood and “abandoned her lines and business long enough to make the dog leave her; whereupon he walked over to the stump, turned around for a time or two and let himself drop against the unrooted remnant of a forest tree. But the stump resented the intimacy and moved away. The amusement ‘out front’ had been well restrained up to the point, but here it gave way to hilarious merriment. Miss Olcott joining in the laughter.

Other adaptations of Sardou’s Théodora were produced. Those included one by Robert Buchanan at the Theatre Royal, Brighton. Buchanan’s production opened on November 18, 1889. Hart (1913) p. 96.

[9] See, e.g. an advertisement in the Magazine Theatre Program (New York) in 1922. This advertisement and another similar advertisement are on display in the Dumbarton Oaks Museum (Washington, DC), Imagining the Empress: Theodora in Popular Culture, 1882–1922. Curatorial material for that exhibit states Sardou’s Théodora inspired multiple silent films from 1900 to 1930. The exhibit includes late-nineteenth-century cameo-bearing buttons of Theodora and Justinian. Those buttons were “designed as party-going accessories that were meant to be affixed to a sash” (from Dumbarton Oaks newsletter).

[10] Boeck (2015) p. 132. Working about 1900, the French painters Jean-Joseph Benjamin-Constant and Georges Clairin painted portraits of Theodora. Lady Randolph Churchill, Winston Churchill’s mother, in 1897 attended a fancy ball dressed as the Theodora of Sardou and Bernhardt. Sigmund Freud kept in his office a photo of Bernhardt in the role of Theodora. Id. p. 131.

[images] (1) Saint Marina of Antioch beating the devil. Icon by Lazaros, 1857. Held in the Byzantine Museum, Athens. (2) Sara Bernhardt playing Theodora, in bed. Detail from painting by Georges Jules Victor Clairin, 1902. Thanks to Wikimedia Commons. (3) Sarah Bernhardt as the Empress Theodora in Sardou’s Théodora. Detail from Albumen silver print by W. & D. Downey. Held in the J. Paul Getty Museum. Other images of Bernhardt playing Theodora are viewable online: her standing, her against a palace door, perhaps her in disguise, and her looking sullen.

Londré, Felicia Hardison. 2007. The enchanted years of the stage: Kansas City at the crossroads of American theater, 1870-1930. Columbia: University of Missouri Press.

One thought on “Procopius to Sardou: gender in demonization of Justinian & Theodora”