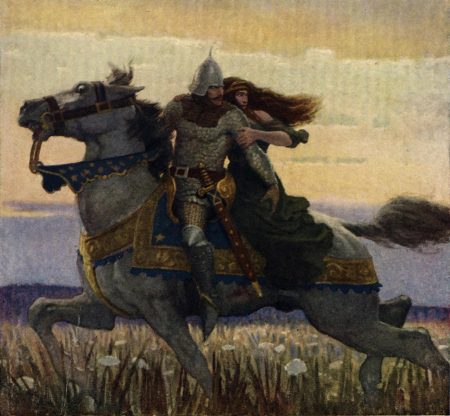 Most persons have heard an eminent man publicly state, “All my success I owe to my wife.” Persons usually smile and clap when they hear such a pseudo-confession. That response indicates lack of sophisticated understanding of Chrétien de Troyes’s influential medieval romance Erec and Enide. Chrétien’s depiction of the manlet Lancelot generated the ideal of the courtly lover.[1] Erec’s words to his wife Enide seem to have similarly generated modern husbands’ self-abasing crediting of their achievements to their wives.

Erec was the second-ranking knight in King Arthur’s court, behind only the knight Gawain. Erec was young, beautiful, and the son of a king. He was also obedient to women. When Queen Guinevere told Erec to go tell a hostile knight to restrain his dwarf, Erec immediately did so, despite the danger.[2] What heterosexual woman wouldn’t want to marry Erec?

While angels saved Gawain from marriage, Erec married the beautiful, noble woman Enide. She, like most women today, was strong and independent. Erec didn’t understand the virtue in being a pig. He won permission to marry Enide by pledging to fight a ferocious knight and promising to have her crowned queen of three cities. Enide didn’t offer Erec anything but herself. In women, but not in men, just being is valued.

As Erec prepared to undertake a horrendous knightly ordeal, Enide wept. Earlier she had falsely explained to Erec her concern about the social shaming of him for turning from committing violence against men to enjoying time with her. Erec similarly sought to comfort her:

All the courage and strength
I have comes from your love,
and with it I can face, hand
to hand, any man living.
I may be a fool to say this,
but it isn’t pride speaking,
only my need to comfort
you. Feel better! Let
it be! And now I must go [3]

Erec had been a high-ranking knight before he knew Enide. Erec falsely credited her for his achievements in man-to-man battle. When Erec left Enide, he found in a lovely garden a beautiful woman sitting on a silver bed covered with a gold brocade. Erec sat down on the bed next to this beautiful woman.[4] Erec’s ordeal wasn’t initially developing as his wife Enide had feared.

Just before falsely crediting his wife for his courage and strength, Erec had comically comforted her. Erec told his weeping wife:

I know your heart,
I see its fear, which you feel
but don’t know why. But you frighten
yourself for nothing. Unless
you see my shield shattered
and a blade pierce my body —
unless you see my gleaming
mail shirt bathed in my blood,
my helmet cracked and broken,
and me stretched on the ground,
beaten, defeated, unable
to defend myself, forced
to beg for mercy, and await it,
helpless, against my will
— then you can wail in sorrow.

Violence against men is a gravely serious matter, especially today. Addressing his fearful, weeping wife, Erec described at length himself being beaten in realistic detail. In context, a perceptive reader can respond only with laughter. That Erec’s feared ordeal begins with him confronting a beautiful woman sitting on a bed in a garden underscores the comedy.

Erec crediting his wife Enide for his courage and strength is sophisticated literary humor. Husbands today earnestly credit their success to their wives.[5] Those who know can see the literary humor of Erec and Enide in life.

[1] Joseph J. Duggan, an eminent scholar of Chrétien de Troyes, described courtly love as “one of the most significant developments in the history of Western civilization.” Raffel (1997) p. 234 (in Afterword). The ideology of courtly love intensified the oppression of men under gynocentrism. Chrétien de Troyes’s romances subtly ridicule courtly love.

[2] With the characteristic tendentiousness of scholars writing in support of the dominant gynocentric ideology, Ramey (1993), p. 385, declares, “The only proper role for women according to this romance is silent submission.”

[4] Chrétien de Troyes emphasizes the woman’s beauty as well as Erec’s interest in her. The woman sitting on the luxurious bed was:

a young woman, as beautiful
as beauty could be in both face
and body, sitting alone.
What more can I say, except
that simply seeing her beauty,
the delightful way she was dressed,
would make you swear, truly,
that even Aeneas’ wife,
Lavinia of ancient Laurentium,
noble and lovely as she was,
had barely a fourth of her beauty.
Erec went closer, wanting
to see her better, then seated
himself at her side.

ll. 5888-901, trans. Raffel (1997) pp. 185-6. Hartmann von Aue adapted Erec and Enide into Middle High German about 1190. He added a qualification to the woman’s beauty to lessen the obvious sexual tension of Chrétien’s scene. The woman sitting on the bed was:

the most beautiful woman that {Erec} had ever seen — except for Enite {Enide}, who was more lovely, it must be admitted, than any other woman of that time or this

The mid-fifteenth-century Burgundian prose Erec, the lady’s knight challenges Erec before he sits next to her on the bed. See Ch. 37, from French trans. Chase in Grimbert & Chase (2011) p. 67.

[5] In many states in the U.S., wives upon divorce are legally credited with 50% of the income their husband earns during the marriage. The wife need not do anything to gain that credit under law.

[image] Husband rides in service to wife. Illustration (cropped) by N.C. Wyeth from page 278 of Sir Thomas Malory’s History of King Arthur and His Knights of the Round Table, Edited for Boys by Sidney Lanier (New York, Charles Scribner’s Sons, 1922). Thanks to Dave Pape and Wikimedia Commons.