Way back in ancient history, Aeneas and Turnus prepared to fight in single combat for the privilege of marrying Lavinia and thus becoming king of the Latins in Italy. Lavinia’s mother Queen Amata recognized women’s responsibility for violence against men:

“Daughter,” she said, “I know and see well
that because of you has come this evil
that has brought the country to destruction
and by which so many men have been killed.

If you want peace, work for justice, including justice for men imprisoned because they lack reproductive rights. Queen Amata advised her daughter Lavinia to love Turnus and hate Aeneas. What man would want to marry a woman who hates him? Queen Amata seems to have reasoned that if Lavinia made clear to Aeneas that she hates him, he wouldn’t seek to marry her and would leave Italy in search of another passionately loving woman like Dido of Carthage. Queen Amata had a more plausible and sustainable peace plan than any Lysistrata ever proposed.

Because men’s lives mattered to her, Queen Amata supported her peace plan with a threat of lethal force. She patiently explained the reality of love at length to her daughter. Then she declared:

You cannot deceive me about it for long.
If I know or perceive
that you turn your heart
to love Aeneas the traitor from Troy,
you must die at my two hands.
Such love I could never endure.
Turnus loves you and wants to marry you.
You should give yourself in love to him.
Love him, daughter!

Centuries later, the highly sophisticated Roman Empress Athanaïs, speaking freely within her own mind, recognized the flaw that would subvert Queen Amata’s peace plan. She observed: 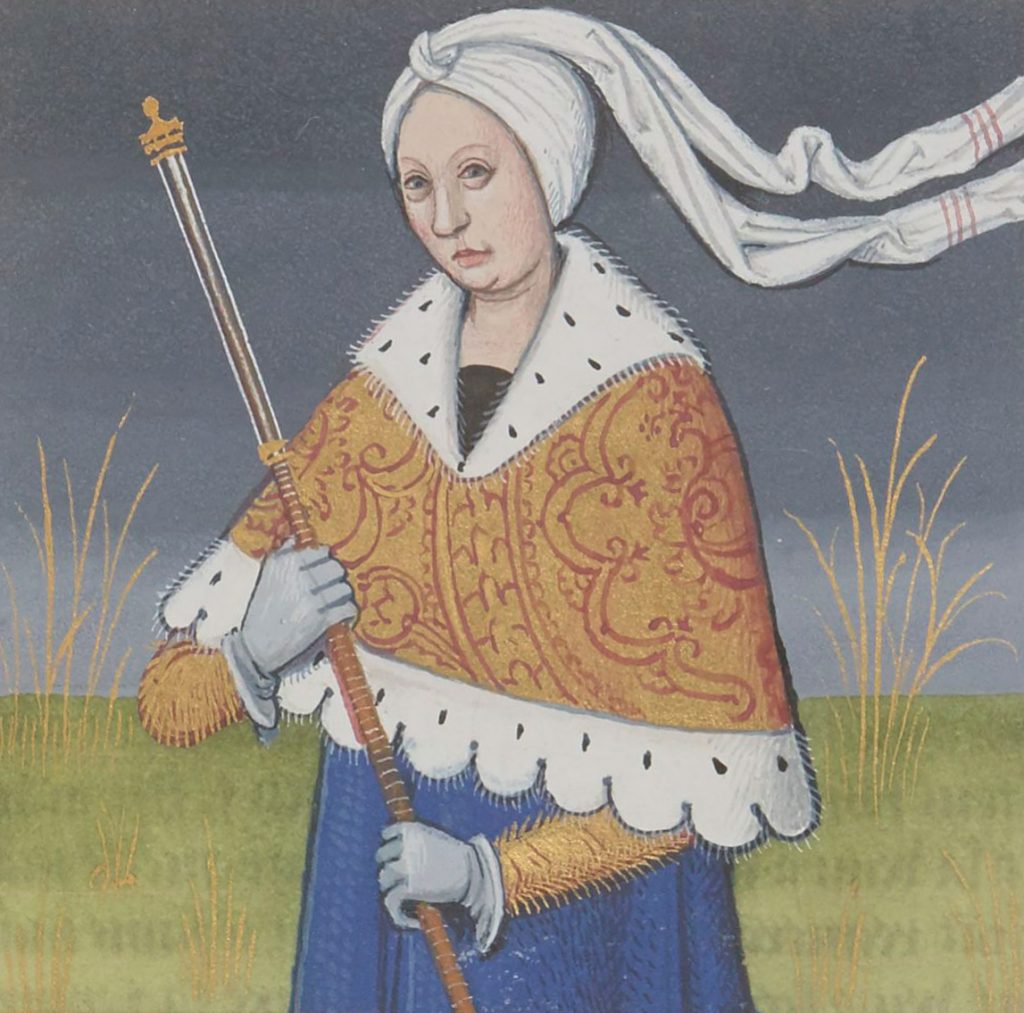 The female gaze led to Lavinia’s rebellion. The Trojans and the Latins had arranged a truce. Aeneas was surveying the fortifications of the Latin city of Laurentum. From a tower within Laurentum, Lavinia saw him:

From a window she looked down
and saw Aeneas who was below.
She looked intently at him above all.
He seemed to her very handsome and noble.
Well she had heard how
all in the city praised him
for his prowess and his beauty,
well she noted this in her heart.
There where she was in her chamber,
love struck her with its dart.

No literary professors condemn the female gaze. But the female gaze has its dangers. When women gaze upon beautiful men, they risk falling in love with them. Thus Lavinia fell in love with Aeneas, and so Lavinia rebelled against her mother’s peace plan for Italy.

Finally, Lavinia confessed that she was in love. Then the question was with whom. Lavinia didn’t want to name her beloved:

I don’t dare, mother, for I think
that you will be very angry at me for it.
You have much disparaged him to me,
you have much warned me about him,
hence I have been more attracted to him.
Love has no concern about warnings.
If I were to name my beloved,
I fear that his name would trouble you.

Eventually Lavinia literally spelled out the name of her beloved to her mother. He was Aeneas. Her mother was furious:

This wretch is of such nature
that hardly has he any concern for women.
He values more a wholly different occupation.
He doesn’t want to hunt for a female’s eggs,
he loves more a boy’s flesh.
He prefers to embrace a boy
rather than you or another women.
He doesn’t know how to play with women,
how to pass through the small gate.
He loves the bowels of a young man.
On this the Trojans were raised.
You have chosen very badly.
Have you not heard how
he treated Dido badly?
Never did a woman have any good from him,
nor will you have, so I think,
from a traitor, from a sodomite.
He will always be eager to abandon you.

Recent scholarship suggests that domineering women in the ancient world desired pubescent boys in the way that some men did.[4] Queen Amata sardonically suggested a similar scenario to her daughter:

If he has any lovely boy,
then it will seem good and fine
that you let him make his pleasure there.
If he can attract the boy with you,
he wouldn’t find it strange
to make such an exchange
that the boy have his enjoyment from you,
while the boy in turn being sufficient for him.
He will gladly let the boy mount you,
if he for his part can ride the boy.
Aeneas doesn’t love pussy.

Because women have not been silenced, the mother went on to attempt to guilt-trip her daughter:

The end of our age would quickly come
if all the men remaining
in the world were such as he.
No woman would ever conceive,
there would be a huge shortage of persons,
no woman would ever bear children, and
this age would pass away in less than a hundred years.

Would Lavinia contribute to extinguishing the human species? Would she be so selfish and unreasonable? If Lavinia continued to love Aeneas, her mother said that she would stop loving her:

Daughter, you’ve lost much good sense
when with such a man you’d make your pleasure,
a man who will never have care for you,
and who acts so contrary to nature
that he takes men and leaves women,
destroying the natural union.
Beware, never speak to me of him again.
I want you to let go of love
for this sodomite, this wretch.
Turn you heart in another direction!
Love the one who loves you,
that is Turnus, who for seven years has
placed in you all his devotion.
Beware that he doesn’t repudiate it.
If you wish to enjoy my love,
then let this traitor remain as he is,
and turn your love towards the one
that I have praised to you. Leave that other one,
who should be to you held as a total stranger.

All her mother’s harsh words only further inflamed Lavinia’s passion for Aeneas.

Showing admirable initiative and directness, Lavinia wrote a love letter to Aeneas. She wrote that nothing meant more to her than him. She declared that she was dying in love for him. She explained that she felt tortured and distressed while yearning for his manly presence. What man wouldn’t be delighted with such a letter, even if he didn’t love the woman who wrote it? She begged him to have pity on her. She even wrote her letter in Latin, the language in which medieval men were relatively free to express their feelings. She wrapped her letter around a barbed arrow and had an archer shoot the arrow toward the Trojan men. That was an action fraught with possible misinterpretation. But Lavinia, a strong, independent woman, wasn’t afraid to take risks to gain a man’s love.

Aeneas unwrapped the letter from the arrow and read it. He was very happy with Lavinia’s love for him. Yet he didn’t let that show, for he didn’t want his men to know. Not having been taught that the male gaze is evil, Aeneas gazed at Lavinia standing at a window in the tower. She saw that he was gazing at her. She didn’t denounce him to authorities for sexually assaulting her. Instead, she graciously gestured to him that she would love him even if he were a man who actively enjoyed being sexually penetrated:

She kissed her finger, then extended it to him.
And Aeneas understood it well —
that she had sent him a kiss.
But he didn’t feel it, nor did he know
of what taste was her kiss.

Aeneas didn’t know that Queen Amata had crudely disparaged his sexuality to her daughter Lavinia. He understood well that she loved him. But the physical experience of love that Lavinia was offering him — that he didn’t know. He later rode slowly back to his tent, greatly confused and full of thought.

Aeneas was passionately in love with Lavinia. He slept poorly, felt sick, sweated and sighed and groaned. He felt inspired to perform great feats of violence against men to be sure of not losing her love. He recognized that women are superior to men in guile and worried that she was two-timing him with Turnus. But her letter, written in Latin, convinced him of her sincerity. He told himself that if had felt such love for Dido, he wouldn’t have left behind the opportunity to be king of Carthage. He considered sending his own love letter to Lavinia. But Aeneas realized that he, like Lavinia, should reverse oppressive gender norms:

Don’t do it. A man should protect himself well.
He shouldn’t show all his heart
to a woman whom he wants to love.
Let him be slightly aloof to her,
so that she feels the difficulty of love,
for if a woman were to manage it
such that she had upper hand, he would regret it.
One should make a woman doubt.
One shouldn’t show fully
how one is suffering for her love.
She will in that way love so much more.

Aeneas didn’t send a return love letter to Lavinia. For several days he didn’t even go out into the field where he could gaze upon her in her stone-hard, upright tower. Instead, he was sick in bed with love for her.

Not seeing Aeneas in the field again, Lavinia angrily imagined that her mother was right. She wasn’t angry with herself for doing the opposite of what her mother had advised. She was angry at Aeneas for having the sexual orientation that her mother said he had:

Women mean very little to him;
he wants his pleasure from boys.
He loves no one except his male whores.
He has his Ganymede with him,
and little of me is enough for him.
He is very long in rutting —
having boys’ middles is his delight.
When he has sated his passion on those,
no woman matters to him.
…
Aeneas would have prized me much more
if I had split my dress
and put on short trousers
and leggings pulled tight.
He has enough boys around him;
the worst boy he loves better than me.
He has split their shirts, and
many he has at his service.
Their pants are often lowered —
thus they earn their wages.

Lavinia tried to hate Aeneas, as her mother had instructed her to do. But she failed. Love won, and so she suffered greatly for him.

Then Aeneas rode out into the field toward Lavinia. She repented of all the cruel words she had said about him. She gave him a sweet look. He gazed at her and sighed deeply. She and he exchanged looks and signs. Neither then doubted that they loved each other. Then Aeneas left to engage in violence against men. 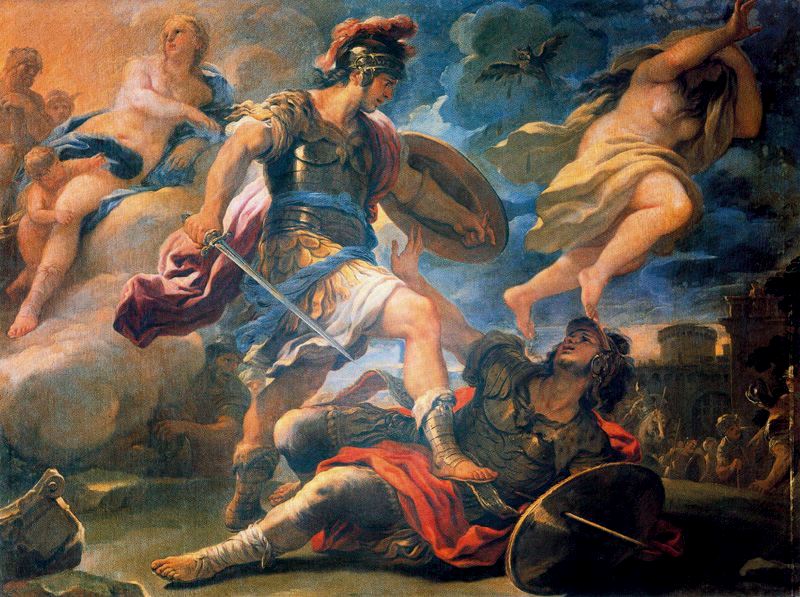 Queen Amata’s peace plan ultimately failed. After her mother told her to hate Aeneas, Lavinia loved him. Mothers, learn from medieval literature. Tell your daughters to love the ones that you want them to hate!

Roman d’Eneas, which survives in seven nearly complete manuscripts, apparently was written about 1156. Yunck (1974) pp. 3-4. It follows closely Virgil’s Aeneid, except for a greatly expanded account of the love affair of Lavinia and Aeneas. Roman d’Eneas was influential in shaping the literary form of romantic love. Id. pp. 27-38.

In the Aeneid, Lavinia is described as the “cause of such great evil {causa mali tanti}.” Aeneid 6.93, 11.479. When King Latinus was lighting altar fires, Lavinia’s hair caught fire. Omen-readers interpreted Lavinia’s burning hair to presage a great war of violence against men. Aeneid 7.69-83.

[3] Manuscripts have variants for this passage, and the meanings of some of the terms are obscure. For alternate translations and analysis, Burgwinkle (2004) pp. xi-ii and Guynn (2007) pp. 81-5.