In the ending book of Virgil’s epic Aeneid, Turnus proposed to engage in single combat against Aeneas rather than many men dying in mass fighting between the Italian and Trojan men. Both Turnus and Aeneas foolishly strove to marry the Italian princess Lavinia. Her mother contemptuously regarded Aeneas as a lover of boys. Nonetheless, Aeneas was a fierce warrior drawing upon the help of his mother Venus. The Trojans were on the verge of defeating the Italians. The upcoming battle would be decisive.

Turnus understood that the impending violence against men fundamentally concerned gender relations. He scorned Aeneas’s gender-transgressive masculinity and prayed to humiliate him:

Grant that I strike down his body and,
with my strong hand, strip and lacerate the breast armor
of that Trojan half-man and defile in dust his hair
that’s curled with a heated iron and drenched in perfume.

Powerful women shaped the destinies of men fighting and dying. Turnus thought that Aeneas would fight without the help of his goddess-mother:

Far from him will be his goddess-mother, who with woman’s mystification
covers the fleet dodger and conceals the enemy in empty shadows.

Men are both romantically simple and pugnaciously simple. Women fight through skillful subterfuge and manipulation. Turnus hoped that he could fight only Aeneas, not Aeneas under the guidance of his goddess-mother.

Juno, wife of the nominal head god in charge of the cosmos Jove, conspired to destroy the single-combat agreement between the Trojan and Italian men. In her hate, she sought to provoke massive violence against men. Juno worked through Turnus’s sister Juturna. Juno implied that Turnus would die in the single combat. She urged Juturna:

“This is no time for tears,” said Saturnian Juno.
“Hurry and, if there’s some way, snatch your brother from death,
or stir up war, aborting the treaty they’ve conceived.
I teach you daring.” Thus having exhorted Juturna, Juno left her
doubtful and disturbed, with a sadly wounded heart.

To instigate war according to Juno’s teaching, Juturna went disguised as a revered Italian soldier into the center of the Italian lines. She sowed rumors and misinformation. She spurred the Italians to break their agreement with the Trojans:

Are you not ashamed, O Rutulians, for so many men
to endanger a single man? In number and might are
we not equal? Here are all the Trojans and Arcadians
and Etrurians, led by fate’s hand and hostile to Turnus.
If every other of us would fight, scarcely an enemy each would have.

After spreading these incoherent claims, Juturna displayed in the sky a fake omen of Jove’s golden eagle. Then an Italian threw a spear at the Trojans, and a mass of Italians charged at the Trojans. Aeneas yelled for the Trojans to restrain their anger. Juturna then covertly hurled a spear at Aeneas and wounded him. Chaos ensued. From its origin in Juno’s hateful scheming, a men-slaughtering battle had begun. 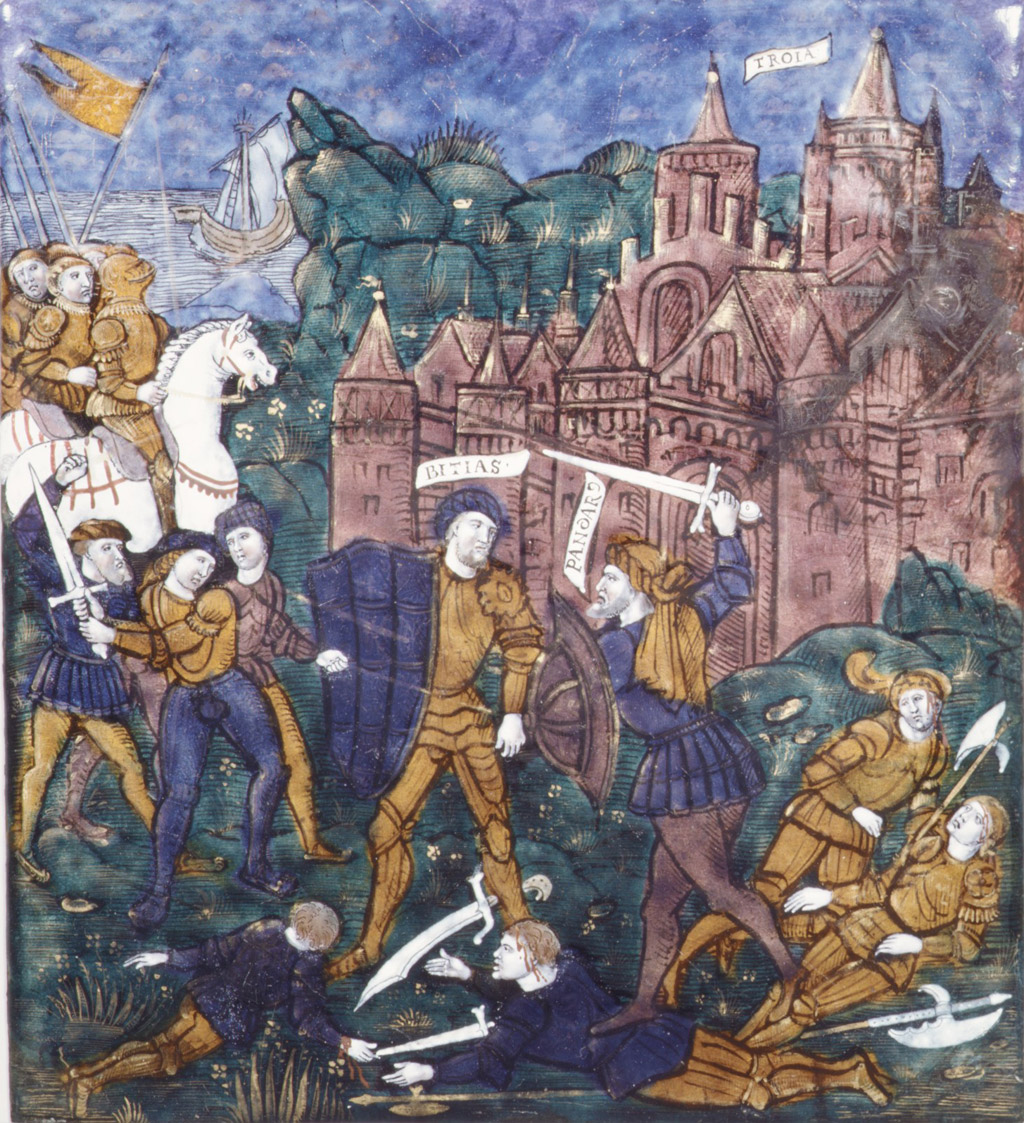 With no concern for all the other men dying, Juturna struggled only to save the life of her brother Turnus. She knocked Turnus’s chariot-driver from his place and, assuming his form, carefully drove Turnus about the battlefield. She displayed him fighting, but kept him away from Aeneas. Unable to engage with Turnus, Aeneas turned to lead the Trojans to besiege the Italian capital. Juturna directed Turnus away from that disaster:

This way, Turnus, let’s chase
the trailing Trojans, where victory offers the first way to us.
There are others whose hands can defend the city’s homes.
Aeneas is attacking the Italians and stirring up fights.
Let our hands similarly give savage death to Trojans.
Neither in kills nor in honor of battle will you withdraw inferior.

Turnus perceived his sister directing his chariot. He heavy-heartedly rejected this violence against men serving merely for claiming merit:

O sister, in fact long ago I recognized you, when first you guilefully
destroyed the agreement and dedicated yourself to this war,
and now for nothing you falsify your divinity. But who on Olympus
willed that you be sent down to do such work?
Was it so that you would see your miserable brother’s violent death?
For what thus do I go on? What fortune now can offer me deliverance?
I have seen before my very own eyes his voice calling out to me,
Murranus — no other more dear to me had remained.
He perished, a mighty one victim of a mighty wound.
Unlucky Ufens fell so that our dishonor
he would not see. The Trojans seized his corpse and his armor.
The destruction of our home (that is the one thing no yet done)
shall I endure? Not refute Drances’s taunts with my right arm?
Shall I turn my back and this country see Turnus flee?
Go so far that dying is misery? You O spirits of the dead, to me
be good, for the gods above have turned their faces against me!
My sacred soul, that one knowing no fault, to you
will descend, never unworthy of my great predecessors.

A messenger then informed Turnus that the city was besieged and on fire. He leaped from his chariot, charged through the enemy lines, and demanded to face Aeneas in single combat.

Both sides cleared the field as Aeneas and Turnus charged at one another. Brutal fighting led to Turnus, his sword broken, fleeing Aenaes. When Aeneas sought to retrieve his spear stuck in a tree, Juturna rushed in and gave her brother Turnus another sword. Then Venus stepped in, pulled the spear from the tree, and give it to her son Aeneas. Those women-goddesses thus contributed to more brutal violence against men.

Meanwhile in the heavens, Jove finally stood up to Juno. He declared to her:

It has come to the limit. To harass across land and sea
the Trojans, ignite unspeakable war,
degrade a royal house, and mix a wedding hymn with grieving —
you have had power to do. I forbid you to attempt more.

Juno pretended to be contrite and subservient. After swearing by the waters of the Styx that she hadn’t told Juturna to wound Aeneas, Juno yielded to allow the Italians’ war against the Trojans to end. Juno then prompted Jove to have the Trojans assimilate with the Italians. Juno knew that her Carthaginians were already sworn to endless war against the Trojans. She thus both wiped out the Trojans as a distinct people and transferred the curse of endless war to the Italians. Aeneas and his descendants wouldn’t enjoy the love that Juno lacked in her marriage with Jove.

Fooled into thinking that Juno was enabling peace, Jove spurred despair and further rage on earth. He sent a Fury to cross Juturna’s path as a bad omen. Turned into a bird, the Fury beat its wings on Turnus’s shield. It terrorized him into perceiving Jove to be his mortal foe. Juturna recognized that Turnus would soon be killed:

What now, Turnus, can your sister do to help you?
What remains for me to suffer? With what art can I
prolong your life? How can I oppose such a portent?
…
Immortal, am I? Yet can anything of mine be sweet to me
without you, my brother? O what land can gape sufficiently deep
to send me a goddess down to the deepest dead souls!

Turnus in the Aeneid is a highly passionate character. His foolish insistence on marrying Lavinia produced massive violence against Italian and Trojan men. Turnus’s gyno-idolatry with respect to Lavinia parallels that of Menelaus with respect to Helen and the disastrous Trojan War.

The Aeneid has been described as “the ‘epic of love,’ for its deepest tragedy is that its people ‘loved too much.'” Pöschel (1950 / 1962) p. 15. Both women and men can be highly passionate, but their passions tend to be expressed differently. Without any analysis of men’s gender position and violence against men, West (1979) analyzes the “passionate and tragic loves” of Anna, sister of Dido, and Juturna, sister of Turnus. She interprets the loves of Anna and Juturna as similar to “the disastrous loves of the more prominent characters.” West (1979) p. 17. The most prominent characters are not necessarily the most important characters. Love in the Aeneid is inextricably intertwined with gender. Turnus’s passion doesn’t align him “firmly with femininity.” Cf. Teasza (2011). Turnus’s gyno-idolatry and his experience of a woman manipulating him are common experiences of men.

[image] Trojans Pandarus and Bitias in battle with Turnus’s Rutulians in Aeneid, Book IX. From image of painted enamel on copper. Made by Master of the Aeneid, c. 1530-5. Preserved as accession # 45.60.4 in the Metropolitan Museum (New York City, USA). Credit: Fletcher Fund, 1945.