Walking around the field that he had assiduously cultivated and plowed, a Lombard joyfully observed his abundant crops. Then, unexpectedly, a snail appeared. The Lombard didn’t know what it was. Paralyzed with fear, he nearly died.

When the Lombard finally regained his ability to think, he thought to himself:

What I see is terrible — my last day has come.
This isn’t a wolf, a bear, or a snake. I don’t know what it is,
but I know that whatever it is, it prepares to do battle with me.
Its shield is a sign of war; its horns are a sign of war.

At least since the Spartan mothers taught their sons to triumph in battle or die fighting, men hesitate to retreat from a fight. Roman men in ancient times gained respect by displaying war wound on their chests. What would this Lombard husbandry man do? 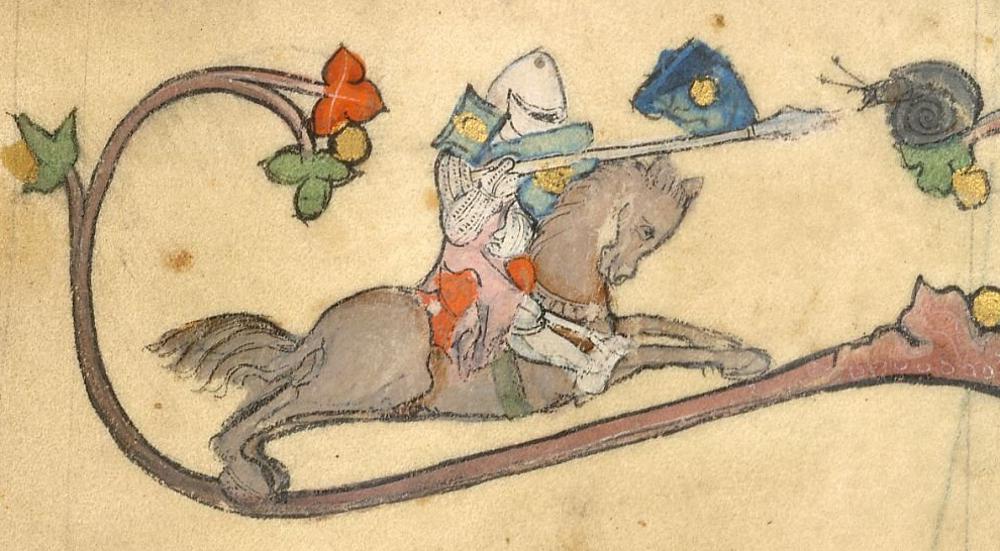 Rejecting the oppressive classical legacy of celebrating epic violence against men, the Lombard husband humanely refused the social construction of manly thinking. He considered what his wife and children would do, and what was fair to him as a man:

It isn’t human to die in this way.
If my wife and all my children saw this,
at the sight alone they would have already turned their backs.
Moreover, this battle wouldn’t seem fair to anyone,
for my enemy is armed; I am unarmed.

Men must insist on fairness and equality for themselves as a gender. Men must reject gender-discriminatory selective military service and institutionalized violence against men. Men should regard their lives as having the same value as those of fully human beings.[2]

This medieval Lombard man hadn’t yet fully developed meninist consciousness. He hesitated. Fear and shame wrestled within him. He thus consulted with his higher powers: the gods and his wife. The gods declared that he would be victorious in battle. His wife, well-studied in the horrible epic tradition of violence against men, was more concerned about her husband’s safety:

What wars please you? Just let the monsters perish.
Set aside your anger. Spare me, have pity!
Spare your children, if you have no concern to spare yourself!
This day will see us separated in anguish.
Neither daring Hector, nor Achilles would have dared this.
The lofty manliness of Hercules would fail here.

That’s solid advice from a loving wife. Men should just let the monsters alone to die on their own.

The specifics of this woman’s advice show her loving care for her husband. In advising him to spare his children if he has no concern to spare himself, she implicitly joins herself to him. She doesn’t want to be separated from him. Her concern highlights the Biblical ideal of heterosexual unity in love. Both Hector, a Trojan, and Achilles, a Greek, died in the terrible violence against men of the Trojan War. Achilles’s mother tried to save him by putting him in women’s privileged clothing. The Lombard’s wife similarly sought to protect her husband from violence. Moreover, the wife’s reference to lofty manliness and Hercules supports her husband’s sexual self-esteem. Men fixated on their physical capabilities tend to admire Hercules even though he failed to stand up to his woman-master Omphale. 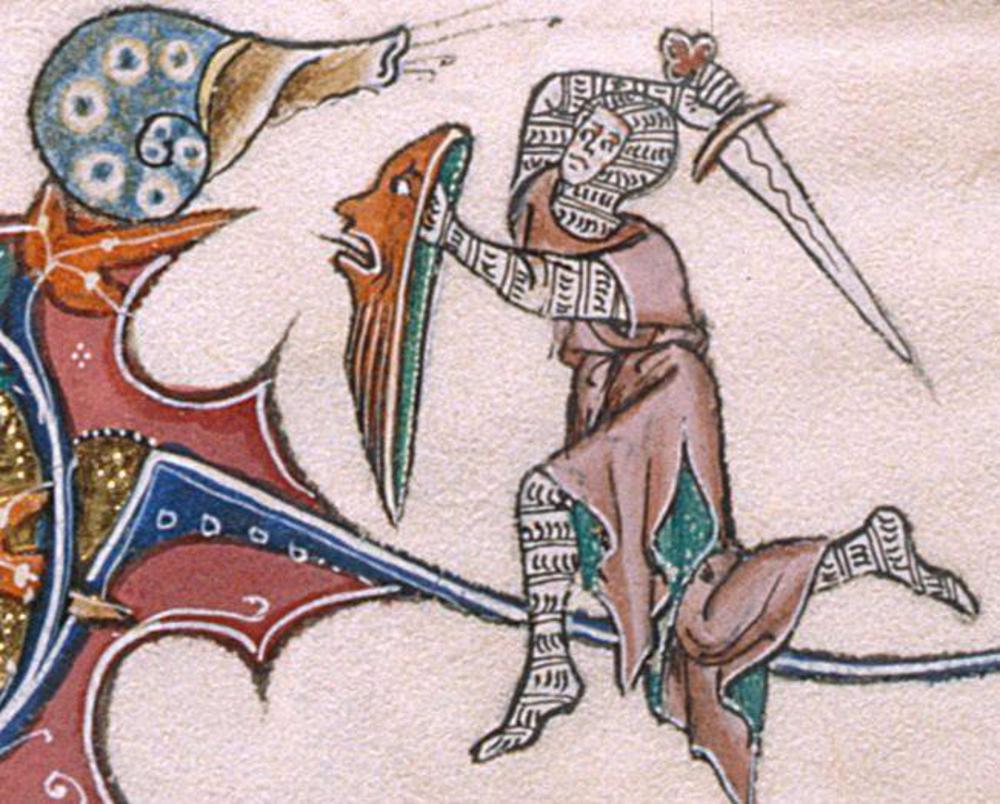 Suffering from internalized misandry, the Lombard turned away from his wife’s loving prayers. He ranked the gods as a higher authority than his wife:

“Set a limit to your prayers, dearest wife,” he said.
“A daring mind isn’t swayed by prayer or tears.
The gods today shall give me fame without end.
Now I pray that you be strong and the boys be strong.”

The Lombard is badly confused. In traditional Greco-Roman morality, pious men tended to spare those who supplicated them with prayer and tears. As a classical epic hero, the Lombard should be swayed by prayer and tears. Moreover, he urges his wife to be moderate, a central medieval Christian value. Nonetheless, he himself seeks fame without end. Most importantly, the gynocentric social devaluation of men’s lives as instrumental inculcates physical strength and emotional constrains in men. That social construction means nothing to women and young boys.

Ignorant of the deeply entrenched gender oppression of men, the Lombard acted like an epic hero and engaged the snail. It was another brutal battle to death:

He thus returned to the battlefield. Here and there he quickly marched,
circling the great beast, sufficiently threatening it:
“O beast whose nature has never before been similarly created,
monster of monsters, pernicious plague,
your horns that you now brandish at me don’t frighten me,
nor does the shell under which for protective covering you remain.
Today you will die by this strong right hand, and no longer
will I endure you befouling my fields.”
And balancing his spear, he looked for points that were
closest to causing death and vigorously pursued victory.

The snail, undoubtedly a male snail, thus suffered defeat and death.[4] He was killed merely for his frightening appearance. He had caused no one harm. 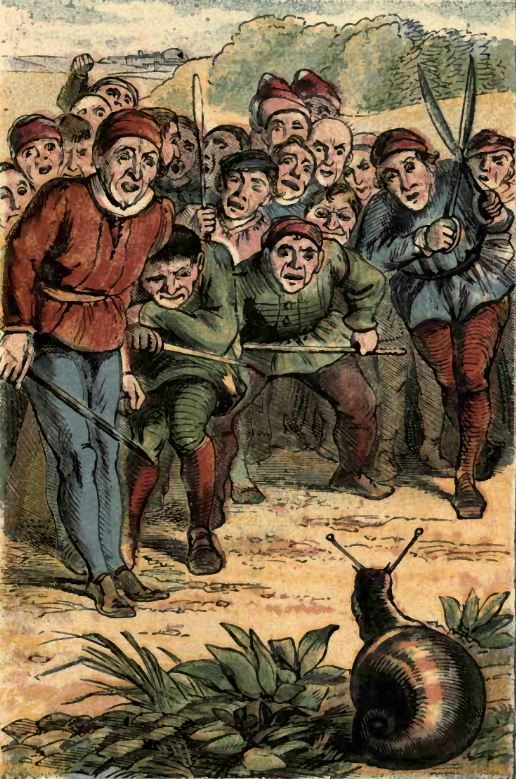 The social construction of gender even directs men into battles other than those of physical violence. The medieval epic On the Lombard and the Snail {De Lombardo et lumaca} concludes:

For such a deed, what will be a worthy prize to give?
That’s no small matter. Let the lawyers come forward.

Lawyers follow the epic tradition of vicious, fruitless fighting. Rather than being warriors or lawyers, men should stay home and enjoy cooking, gardening, woodworking, or studying classical and medieval literature.

[1] On the Lombard and the Snail {De Lombardo et lumaca} vv. 8-11, Latin text and English translation (modified) from Hexter, Pfuntner & Haynes (2020) pp. 100-1. De Lombardo et lumaca probably was composed late in the twelfth century in Italy. It survives in twenty-five manuscripts. The earliest of those manuscripts was written in the thirteenth century. Randall (1962) pp. 363-4, Cardelle (2013) pp. 25, 35-6. For a freely available, early critical edition, Novati (1893). For a recent edition of the Latin, with commentary and an Italian translation, Voce (2009). For a freely accessible review of medieval pseudo-Ovidian literature, Kretschmer (2013). On medieval beast poetry, Ziolkowski (1993). Id., Appendix 22 also offers an English translation of De Lombardo et lumaca.

Comic epic goes back at least to the Battle of the Frogs and Mice {Batrachomyomachia / Βατραχομυομαχία}. That work was attributed to Homer,  but it was probably written about the fourth century BGC. Some pictorial evidence from the second and third centuries GC suggests a snail as a figure in a battle. Cardelle (2013) p. 28. From the middle of the twelfth century, Lombards were associated with non-chivalrous behavior. Randall (1962) p. 363. That characterization probably built upon the Lombards fleeing from Charlemagne in battle in 772. Id. p. 364.

[2] In a related popular nursery rhyme, children are inured to a female snail threatening to massacre many men:

Four and twenty tailors went to kill a snail.
The best man amongst them durst not touch her tail.
She put out her horns, like a little Kyloe cow,
run, tailors, run, or she’ll kill you all just now. 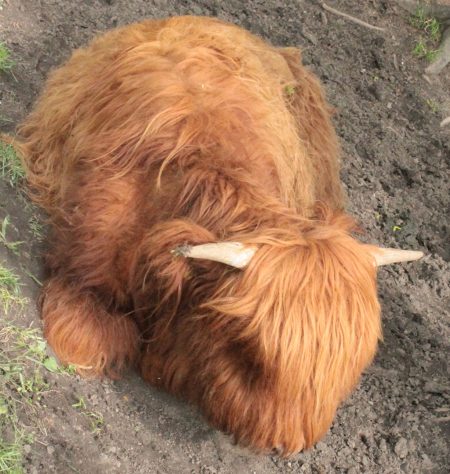 This nursery rhyme also exists in Anonymous (c. 1870). The preface to that work declares:

The Publishers offer in this little volume well known and long loved stories to their young readers. The tales which have delighted the children of many generations will, they feel assured, be equally welcome in the nurseries of the present day….

[3] My translation of misere in Parce mihi misere is questionable. Hexter, Pfuntner & Haynes (2020), p. 103, has “Spare me in my misery”; Ziolkowski (1993), p. 292, has “Spare me, wretch that I am.” In contrast, I’ve translated misere as the second-person active imperative of misereo. Hexter, Pfuntner & Haynes translated misere as an adverbial form of the deponent misereor. The second-person active imperative of misereor is miserere. A leading authority on medieval Latin philology has noted that while both verbs existed in classical Latin, medieval Latin gravitated toward the deponent. Thus the deponent form would provide the best translation in a normal medieval Latin text using misere.

It’s especially in parodic relation with the Latin epic tradition that the comic unfolds. Numerous lexical borrowings from Virgil, Statius and Ovid’s Metamorphoses evoke the epic style. They are most often isolated words or groups of words too short to be able to speak of “quotations” that would evoke concrete scenes from the ancient texts.

In addition to its linguistic availability, the verb misereo also seems to me to make better sense in its specific context in De Lombardo et lumaca. The wife is tearful and fearful, but not miserable. She enjoys having her husband with her now. Her husband dying in a future battle with the snail would make her miserable then. She’s a happy, truly loving wife concerned to protect her husband from violence.

[4] Medieval depictions of human engaging with snails encompass a wide range of gender configurations. In one medieval manuscript, a woman implores a knight in relation to a snail. Whether she seeks him to fight the snail to protect her or seeks to dissuade him from fighting the snail isn’t clear. Folio 15v of BnF Latin 14284 (Book of Hours made in France (Picard) about 1280). In other medieval manuscripts, a naked woman battles a snail. Folio 98v of Morgan Library MS M.358 (Book of Hours made in southern France ca. 1440-1450). A naked man riding a snail attacks a naked woman. Folio 184v of Morgan Library MS M.358. A knight,  apparently defeated, supplicates a snail. Folio 162v and Folio 213v of British Library Add MS 49622 (Gorleston Psalter made in England (Suffolk) between 1310-1324).