In the middle of the eighteenth century, the Enlightenment philosopher-hero Voltaire ended his picaresque novel Candide with the wisdom, “We must cultivate our garden {Il faut cultiver notre jardin}.” In ninth-century Europe, the scholar-monk Walahfrid Strabo wrote a small book About the Cultivation of Gardens {De cultura hortorum}. Walahfrid apparently drew upon Caelius Sedulius’s fifth-century re-orientation of literary excellence in his Paschal Song {Paschale carmen}. These vastly under-appreciated literary works should be cultivated to support humane culture.

In the preface to his Paschale carmen, Sedulius associated modesty with gardening. Rhetoric of affected modesty has been well-known from the classical Roman writers Cicero and Quintilian.[1] Adapting the classical affection of modesty, Sedulius offered to his reader, figured as his dinner guest, not the whole world to eat but simple, meaningful food:

Do not be scornful, if you acknowledge yourself to be my friend,
and do not seek here a literary masterpiece,
but contentedly approach the solemnities of my modest table,
and drink more of spirit than satiate yourself with food.
If you are, to the contrary, more taken with great things’ sweetness
and a voluptuary who prefers riches,
feed yourself on splendid meals offered by noble men of learning,
whose vast wealth cannot be calculated.
There you will find to eat whatever grows in the sea,
whatever the earth brings forth, whatever flies up to the stars;
waxen honey gleams in jeweled containers,
and golden vessels glow with the color of the honeycomb within.
But I have picked a few greens from a poor man’s garden,
and placed them for serving on a red earthen potsherd.

This passage presents a self-subverting contrast between low and high interests. Concern for food is classically regarded as lower than concern for spirit. Voluptuaries seeking only sweetness lack cultural sophistication. They’re attracted to gold and its sensory correlative, honey. Sedulius instead serves on red baked clay a few greens from a poor man’s garden. From a Christian perspective, Sedulius is offering to God-created humans — clay animated with spirit and colored with blood — the life that the servant-savior Jesus offers to everyone.

Since pagan poets strive to trick out their fictions
with pompous phraseology and use tragic bombast
or the comic Geta, or any other style of singing
to recreate the cruel contagions of wicked deeds
and memorialize criminals in song in the traditional way,
passing on multiple lies in books of papyrus from the Nile,
why should I, who am used to chanting in songs of David
psalms for the ten-stringed lyre and standing in awe
in the holy choir and singing of heaven with peaceful words,
why should I keep silent about famous miracles of Christ the Savior,
when I can speak plain truth and with wholehearted delight
confess the thundering Lord with all my senses?

In traditional Greco-Roman religion, the Thunderer was the head god in charge of the cosmos — Juno’s husband Jupiter. Sedulius replaced Jupiter with Jesus — Christ the Savior born of the Blessed Virgin Mary. According to Sedulius, from seeds of life nourished with divine water the Christian way offers fruit that piles up a hundred-fold in huge barns.[3] That’s not simple gardening. Sedulius didn’t literally write about gardening. He recast the Bible into the high poetry of classical epic.

Sedulius was an enormously influential author. Over four hundred manuscripts containing at least some of Sedulius’s writings have survived to the present. He was commonly part of the medieval European school curriculum:

In fact, of the “patristic poets” in general, both Greek and Latin, only Prudentius can be said to match the popularity and influence that Sedulius’s works enjoyed across the centuries. … To judge from the evidence of manuscript production, there was a great flowering of interest in Sedulius during the Carolingian Age, which continued unabated during the rest of the Middle Ages and well into the early modern period.[4]

In eighth-century Europe, the leading scholar-cleric Alcuin of York, who advised Charlemagne, studied and lauded Sedulius. So too did the sixteen-century German theologian and church reformer Martin Luther. 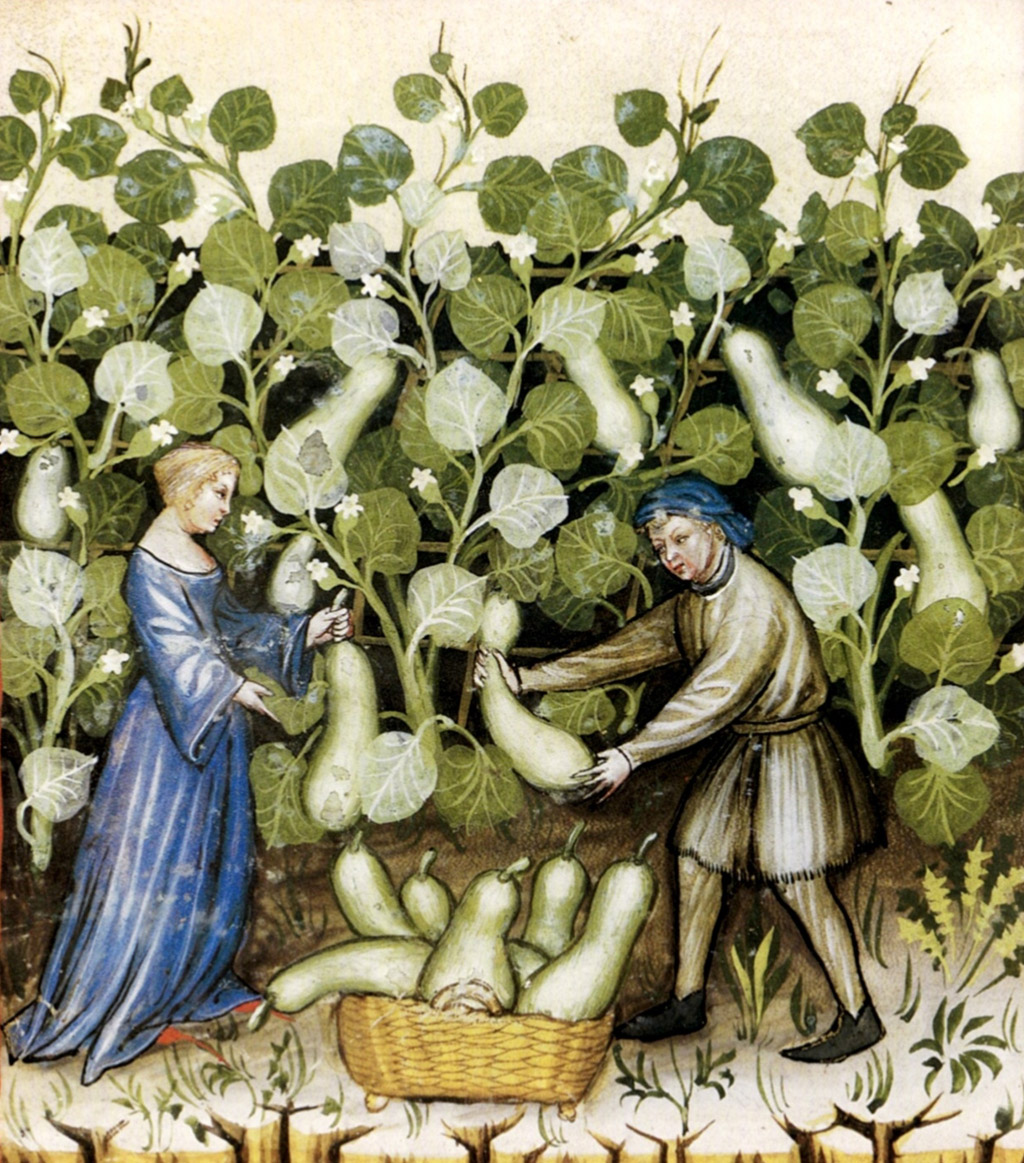 The ninth-century scholar-monk Walahfrid Strabo developed the garden figure of Paschale Carmen’s preface differently. Walahfrid was a tutor employed by Charlemagne’s son Louis the Pious, the Carolingian emperor succeeding Charlemagne. Given his personal connections and his interests, Walahfrid almost surely read Sedulius’s Paschale carmen.[5] Moreover, Walahfrid literally cultivated a garden. For dinner guests, Walahfrid may have actually served on a red clay plate some greens from his humble little garden.

Walahfrid wrote About the Cultivation of Gardens {De cultura hortorum}. So humbly is that verse work constructed that modern readers have commonly received it merely as a charming medieval book about gardening. In European culture, artful, learned literature concerning agriculture has revered roots in Virgil’s Georgics and Hesiod’s Works and Days. Walahfrid dedicated his book on gardening to Father Grimold, his teacher at Reichenau Abbey:

Most learned Father Grimold,
your servant Strabo sends you his book,
a trivial gift and of no account, only so that,
seated in your own garden, where peach and apple
cast their ragged opacities
and your small students, laughing, gather up
the shining or furred fruit and bring it you
clutched to the stomach with both hands,
or put it away in bushels,
you might find some utility in it — more,
that you may prune it back,
strengthen, fertilize, and transplant it
as seems best to you. So may you at last
be brought to such flourishing
as grapples God’s trellis toward
the evergreening of unwithering life:
this may Father, Son and fruitful Spirit grant you.

This vignette of ordinary life in a fruit garden enacts a theological message. Immediately preceding his series of poems on plants in his vegetable garden, Walahfrid wrote:

I take up this work now with my talents and learning,
now with my understanding and eloquence,
so that I may touch upon the names and virtues of such a
harvest, so that small matters may be adorned with vast honor.

The pernicious weeds of misandry, sexism, and anti-meninism are now choking out reason in our garden of enlightenment. Women and men must understand themselves and imaginative literature through the ages with appreciation for the lived experiences of ordinary men and women. We must cultivate our garden.

The closer the path
of a pure life is to the ground, the nearer it is to the sky.

Let their minds despise riches and be content with little,
taking their lead from the Lord, who satisfied five thousand
with modest food when they all were in the wilderness.

“Verses of Bellesarius the Rhetorician {Versus Bellesarii Scholastici}” vv. 14-16 (of 16), Latin text and English translation (modified slightly) from Springer (2013) p. 230. The previous short quote is from v. 8.

when Sedulius assures us in his preface that as our host he will be serving up a simple rustic paschal meal, not featuring the fancy kind of food served by the pagan culinary competition, his metaphorical declaration is hardly simple or straightforward. It is the height of sophistication to claim lack of sophistication. His own sophisticated rhetoric undercuts what he is saying.

Curtius put Sedulius in the class of “inflated, vain, soulless, and unintelligent rhetors”:

He demonstrates that even a recent convert could take over the frippery of the pagan school rhetor into his Christian life, could indeed make it over into Christian clothing and strut about in it. … What affected modesty! Certainly we are here dealing with a stylistic convention. But it is employed with such self-satisfaction that we cannot but doubt the seriousness of the poet’s religion. … Sedulius had a large measure of literary ambition, but he had nothing to say.

Curtius (1953) p. 460, 462. That’s as absurd a projection as is misogyny. Sedulius’s explicit and exuberant destruction of the modesty topos is better interpreted as indicating his ardent belief in the importance of what he had to say relative to pagan literature.

Throughout its existence — from Juvencus to Klopstock — the Biblical epic was a hybrid with an inner lack of truth, a genre faux. The Christian story of salvation, as the Bible presents it, admits no transformation into pseudo-antique form. Not only does it thereby lose its powerful, unique, authoritative expression, but it is falsified by the genre borrowed from antique Classicism and by the concomitant linguistic and metrical conventions.

Id. p. 462. Sedulius’s Paschale carmen transformed the Christian story of salvation into the antique epic form. For more than a millennium, readers found Sedulius’s Biblical epic helpful for incarnating the Bible in their lives and so witnessing to the continuing vitality of the Christian story.

Curtius’s assertion of Biblical epic’s “inner lack of truth” seems to draw upon the medieval interpretive practice of distinguishing surface meaning (chaff) from inner meaning (fruit or kernel). Jerome’s interpretation of the captive maiden demonstrates that perceiving inner meaning can help to reveal socially suppressed truths. Nonetheless, many today regard the inner meaning of the Bible as no more true than that of the Aeneid. Beyond that modern commonplace, Curtius seems to say nothing coherent. He seems to offer nothing but dogmatic assertions supported with a massive apparatus of surface erudition.