Juno, Minerva, and Venus all belonged to the sisterhood of women. They also were closely related. Minerva was Juno’s step-daughter and niece. The father of Juno’s husband had castrated his father, whose genitals fell into the sea and formed Venus. What could be more empowering for womanly solidarity? Yet when it came to having Paris judge their beauty, these three sisters were at each other’s throats. 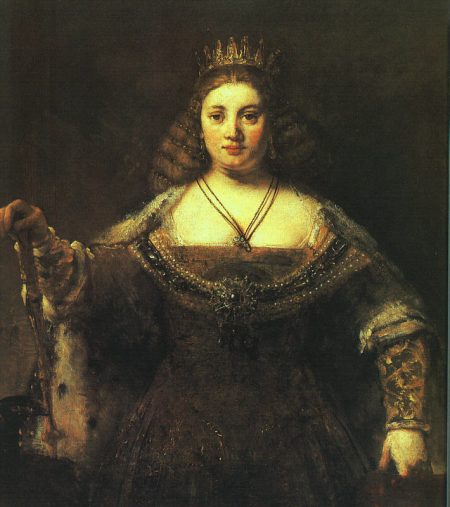 In addressing Paris and his judgment, Juno emphasized her queenly position. She described herself as the “bride of great Jove {magni nupta Iovis}.” Jove was titular ruler of the stars, while his brothers Neptune and Pluto nominally were in charge of the seas and the underworld, respectively. Juno proudly proclaimed her status as wife of Jove. Yet, within gynocentric society, she also rightly understood herself to be the actual ruler of all:

I myself, am Jove’s
only love, the one who guides the laws of the triple realms,
who am obeyed by Neptune’s wave, and shades of Hell
and stars of Jove — yet I won’t anger, if judged by you,
a mortal man, since I’ll not return to Jove less loved,
if a human, in doubt of Juno’s beauty, delays.
If long delay, surely you’re lost in admiration;
my fame, always with me, couldn’t be thought false.
Behold my unveiled face, a sight few gods have seen!
‘Tis thus I come to Jove’s embrace.

In actual myth, Jove had affairs with many women while married to Juno. Evidently she wasn’t alluring enough to be the only woman that her husband sought to embrace.

Now who would dare
compare horrific Pallas, a Gorgon full of war,
to cheeks like mine? All sense of shame isn’t so exiled
that this common terror, low scourge, and death’s porter,
would hope to please by fear. Wicked one — I meant
to say “divine” — some advice: no sword is needed here.
Away with your snakes, throw off your military face.
Show a do-able face — no frowning, and remove
your metal helmet to let your shut-in viper breathe.
Reveal the horror and shame your helm and shield
conceal: have courage to deserve your true acclaim!
Learned Minerva brings
such revolting delights, yet seeks to be pleasing?

Juno then speculated that Minerva was the daughter of a whore. Juno also acknowledged the common view that the manly Minerva had no mother. Underscoring the all-encompassing importance of classical philology, Juno considered the meaning of Minerva:

Does she, so bold, take pride
in thinking just of men, and did she hence
deserve the name of virago? For sure, her wrath tires gods,
and consumes men. “But she is ‘martial,'” as they say;
so thus she mars up men. “She’s Pallas” — yes, she’s pale,
or from slitting Pallant’s throat. Her name she earns
by double right, by hue and by her harmful hand.

Juno was being mean to Pallas. But reality shouldn’t be denied: men generally aren’t attracted to mannish, violent, frowning women, even if such a woman is learned and the daughter of a whore. Paris’s judgment of the most beautiful among the three goddesses surely wasn’t going to select Minerva.

Venus was a much more threatening rival. Juno fiercely and haughtily attacked her:

You evil-doer, you, I say, a sex prodigal,
more womanly than law allows, lewder than is fair for us,
you, Venus, dare to come and contend for beauty’s prize?
Know you not with whom you measure yourself?

Juno had the same high parentage as Jove, the heir to the heavens. She was in fact his sister before she became his wife and the ruler under their shared rule. Venus’s origins were lower. Juno declared:

Let the Sicilian go and challenge our fair face.
I go as chosen bride of Jove. That’s wrong? Should she,
goddess of Paphos, be instead? Why not? Her birth was
auspicious — she grew from foaming sea and cut-off balls!

While married to the Lemnian Vulcan, Venus had affairs with Mars and other men. While Jove had affairs with many women, his wife Juno recognized men’s distinctive concern for spousal fidelity. Juno thought that Venus would have made a disastrous wife for Jove:

Instead of making Jove a father, she’d bear for warlike
Mars and all the world. From her, the heaven’s heir
would doubt and foul the golden age with lowly ore,
and Vulcan, who by Pheobus’s aid or vengeful net,
could not secure a carefree night or solid trust,
would gently seek revenge for another god’s shame
and would not pant in eagerness for his own wife.
And her Trojan — no, no more. All know the most notorious
of the goddess’s adulteries. “But she’s gentle, kind, and golden.”
She gently plots deceits, kindly kindles evil,
and grasps for golden gifts: that’s how she behaves.

Vulcan probably would have been better off if Venus had married Jove rather than him. But who cares about men’s welfare? Certainly not most men, who mostly care about what women look like, not what material goods women can provide for them. In judging women, most men foolishly judge fleeting beauty above all.

So it was with the young Trojan man Paris. Juno forthrightly declared to him:

You, Trojan, learn to earn the thanks
of Juno, I carry the sceptre and bestow gold!
The world admires such wealth; the comets grant vast realms
like these: now choose which sceptre or land you want.

While Juno was powerful and wealthy, Venus was highly feminine and sexually eager. After seeing Venus naked and receiving her enticing offer, foolish Paris chose Venus as the most beautiful goddess.

The quotes above are from Joseph of Exeter, Ylias Daretis Phrygii {Iliad of Dares Phrygius}, also known as De Bello Trojano {About the Trojan War}. Joseph of Exeter apparently wrote a version of Ylias Daretis Phrygii early in the 1180s and then finished his final revision in 1190. The Latin text is in hexameter (epic) verse. The text has survived in six manuscripts. The earliest was probably written in Salzburg, Austria, around 1250 to 1260. Bate (1986) pp. 5-6, 10-12. Little is known about Joseph of Exeter’s life. He clearly was a highly learned man, steeped in classical literature.

For the quotes in English above, I’ve adapted the verse translation of Rigg (2005), with help from the prose translation of Bate (1986). I’ve made considerable changes to Rigg’s translation, mainly to follow the Latin more closely.

4 thoughts on “Juno disparaged Minerva and Venus: some difficulties of sisterhood”