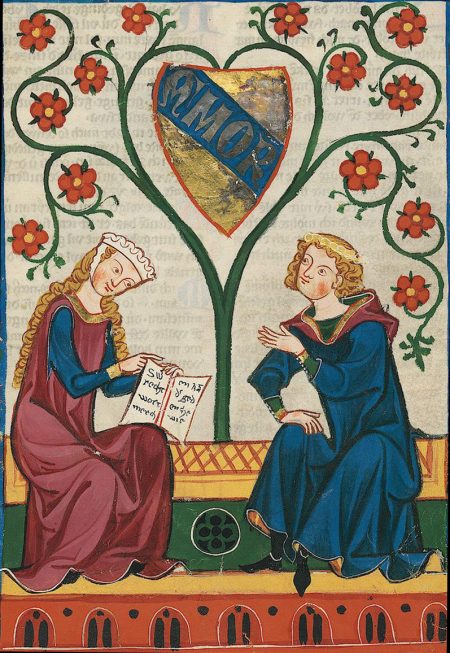 When in love with a woman, most men in their purity and innocence simply want to have sex with her. But life gets much more complicated. Consider, for example, the case of Hysminias in twelfth-century Byzantium. After enduring sexual harassment from Hysmine, Hysminias fell passionately in love with her. Yet before he could have sex with her, barbarians and Greeks enslaved him. To make matters worse, both the woman who owned him as a slave and Hysmine’s female boss amorously besieged him. Merely to kiss Hysmine, Hysminias had to engage in the fiction that he was kissing Hysmine’s female boss. As innocent men ruefully learn, real-world romance can be tragic.[1]

Hysminias had been in love with Hysmine for a year, yet he hadn’t fully realized his desire. Enslaved, he wept for his misfortune and mournfully recalled flirting with Hysmine. The Greek mistress who with her husband owned Hysminias asked him about his parentage and the story of his life. He summoned learning and eloquence amid his tears and responded:

Mistress, I am your slave; when you ask to know more you are asking for a whole play, a complete tragedy. I am the exemplification of Fate, a ghost from the underworld, the plaything of the gods, the Erinnyes’ banquet. [2]

She and her husband insisted. Hysminias then told of his love for Hysmine, their elopement by ship, the storm, his loss of her at sea, and his being captured and enslaved. Seeing Hysminias’s passionate grief, his master-owner urged him to “cultivate chastity and love sobriety.”

Some days later, on the festival day that was the anniversary of Hysminias falling in love with Hysmine, Hysminias’s mistress-owner accosted him. Hysminias was lying down, dreaming and weeping about long-past times with his beloved Hysmine:

I held up to my mind … the well within the garden, the birds on it, the golden eagle, Hysmine pouring out the wine, teasing me with passion, playing with my feet, playing with the cups and everything else that we did in our sport (alas for those passionate delights in my dreams); and above all else I whispered softly, “Hysmine, my beloved.”

Why are you so drenched in tears? Look who is beside you; you have me as your Hysmine, your mistress and your slave in passion.

Hysminias sat up and rebuffed his mistress-owner. She then sat next to him and attempted to seduce him. He responded stolidly. She then threatened to strike him. She verbally abused him and spun household intrigues against him. But Hysmine didn’t yield to her. Despite obvious advantages of becoming her lover, Hysminias didn’t even allow her to trespass on his thoughts of loving Hysmine.

At the lavish herald’s banquet, the host’s daughter Rhodope worked as a serving maiden. Long ago Hysmine had performed the same service at the herald’s banquet for Hysminias. According to Hysminias, Rhodope was:

a lovely girl if you compare her with maidens in general but, in comparison with my Hysmine, she was like an ape compared to Aphrodite.

Later, Hysmine sent Hysminias a letter. She reminded Hysminias that because of him she had become a captive and a slave. She also instructed him on how to behave. Hysminias pondered the sense and meaning of this letter. He sat in the garden and drenched the letter in tears. Rhodope came up to him and asked him what was the matter. She also asked about his parentage and how he had become a slave. Hysminias responded:

tears overwhelm my speech, mistress, and hinder my tongue and swamp my soul and inhibit my voice entirely. If you want to observe a Fate that had led to misery, I provide the example in my own person, completely clad in misfortune and transformed into abominable circumstances, a veritable picture of ill luck.

Rhodope begged to be told more. Hysminias told her his story. He then fell to the ground in grief. With loving concern, Rhodope clasped his hands and wept. She placed her hands on his chest and massaged his heart. Then she kissed him and asked him his name.

Rhodope’s servant girl Hysmine was weeping nearby. Rhodope asked her what was the matter. She said that Hysminias was her long-lost brother. Hysmine embraced Hysminias and kissed him, and he her in return. Their passionate love for each other wasn’t incestuous. They struggled to avoid that fiction and to create the fiction of a brother-sister reunion.

Hysminias later sat by himself, overwhelmed with teeming thoughts. Hysmine came and sat beside him. She freely kissed him, laughed, and said:

I kiss you as my brother, I embrace you as my lover. But this kiss is not mine, it is not from me the beloved to you my lover, nor from a sister to her brother; it is from a slave to her mistress’s lover. Rhodope, my mistress, loves you. I am the procuress, and this kiss is her message.

That was a story that Hysminias could barely comprehend. He kissed her and wept. He declared that he would “pray to die a slave with Hysmine rather than be free and immortal with Rhodope.” Hysmine kissed him again and explained:

These are not my kisses but I convey to you kisses from Rhodope, the mistress whom I serve as a slave.

You really are my Hysmine. I kiss your lips, even though they belong to my fellow slave, my sister, my beloved. And I kiss the kisses, but not as though they are Rhodope’s kisses but Hysmine’s, whom Zeus betrothed to me and whom now emperor Eros restores once more. Away with Rhodope and Rhodope’s passion and any other maiden whom the Erotes throw in your Hysminias’s way!

Even if you do not love her, even if you spurn her passion, even if you observe our vows, pretend for my sake to be in love and act the lover for me; and perhaps the deception will not be useless and without results for us. Even if it allows nothing else, I shall be able to converse with you without inhibition as a slave, and embrace you as your sister, and I can convey kisses to you as the procuress.

While uneasily and recalcitrantly following Hysmine’s fiction, Hysminias didn’t suspend the reality of his desire. To send kisses to Rhodope, Hysminias offered to kiss Hysmine anywhere “where the grapes of passion are to be harvested.” Even more boldly, Hysminias declared to Hysmine:

Whatever you think should be said to please Rhodope, say it as if from me. If she asks to be kissed, kiss her, and give her all the many kisses that my lips have stored in your mouth. And if she is not satisfied with kisses alone and her passion is not assuaged with lips but, like female palm trees, she seeks a shoot from the male palm to penetrate into her innermost soul, I shall demonstrate first with you, conveying this to Rhodope.

Demonstrating penetration was action too forward and direct for Hysmine. She ran off to convey Hysminias’s kisses to Rhodope.

Hysminias’s pure desire to have sex with Hysmine came to be entangled in Byzantine amorous relations. Hysminias’s master-owner, the herald, returned home from Artykomis with Hysminias. The herald brought with him as guests the herald-banquet hosts and their daughter Rhodope. Rhodope brought her servant girl Hysmine. All gathered for a banquet at the master-owner’s home. Three women there were in love with Hysminias: his mistress-owner, the herald’s wife; the herald-banquet hosts’ daughter Rhodope; and Rhodope’s slave-servant Hysmine. Working as a slave-servant at the banquet, Hysminias struggled to juggle these amorous plates:

So my mistress {owner}, enrolled in the service of the Erotes, flirted with me over the cup and jested with me, or rather the Erotes flirted with her, using me and the cups.For at one moment she pressed my finger, at another she pulled my entire hand together with the cup and sported in other ways, or was made a game of by the Erotes. While I tried to escape from this as if from a fire, I too flirted but with my fellow wine-pourer, Hysmine, exchanging games with the mistress for games with the slave. This Rhodope approved and she allowed flirtation with the slave as though she was rather more Hysmine’s slave since she was assisting in her passion.

Exhausted from the romantic challenges of the banquet, afterwards Hysminias went quickly to the servants’ quarters to sleep alone.

Increased public support for study of Byzantine literature such as Hysmine and Hysminias could help men to overcome their romantic simplicity. For men lacking in literary appreciation, Solon’s wise welfare proposal could provide an important safety net. Individual women also have important personal responsibility. Women should respond with understanding, sympathy, and mercy to the men who love them.

[1] Scholars have been slow to appreciate the importance of Hysmine and Hysminias for men. Alexiou (1977) is a pioneering literary appreciation of a Byzantine novel. Yet that work narrowly interpreted Hysmine and Hysminias as providing “insight into female behavior as viewed by men.” With a similar intellectual perspective, Alexiou’s article might be regarded as offering only a woman’s insight into a man-authored work. Hysmine and Hysminias “clearly puts aside the principle of emotional gynecocentrism which was the norm of the Greek novel.” Jouanno (2006) p. 159. That underscores the importance of bringing a masculine perspective to understanding this Byzantine romance.

[3] A central compositional technique in Hysmine and Hysminias is doubling and repetition. Nilsson (2001).

[image] Woman strives to educate man beyond his natural romantic simplicity. Illustration from Codex Manesse, Zurich, made between 1305 and 1315. UB Heidelberg, Cod. Pal. germ. 848, fol. 311r. Thanks to University of Hiedelberg and Wikimedia Commons.