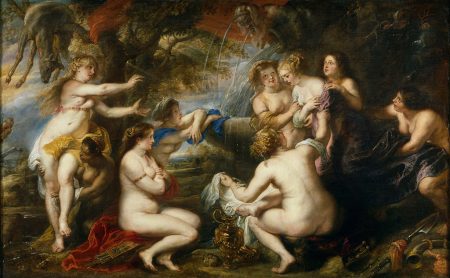 In choosing mates, men tend to have narrower criteria than women do. Beauty, with its close correlates youthfulness and a healthy sexual receptivity, is typically men’s paramount criterion in seeking intimate, heterosexual relationships. A woman’s educational degrees, her career success, and the shoes she wears are relatively unimportant to most men. In the sixth century, the sophist Choricius of Gaza pretended to make a case for a young war-hero to marry an ugly but wealthy girl. Choricius’s declamation is best interpreted as a light parody of that type of rhetorical exercise. A young man in love being seriously concerned with any factor other than his sense of his prospective bride’s beauty is scarcely credible among persons broadly free to think and speak as they were in the sixth century.

In arguing for a war-hero to marry an ugly but wealthy girl, Choricius’s declamation deliberately presents an unappealing case. The speaker is the boy’s father. In the ancient world, fathers were respected no less than mothers are. This father, however, is described as a wealthy, miserly old man. A wealthy miser is a perennial character of social opprobrium. The declamation’s theme has as its first sentence’s subject “a wealthy miser,” not a father. In the first sentence of his explanatory header, Choricius included an aside that the old man doesn’t love a beautiful maiden because “old age is usually chaste in such matters.” That’s a wry insinuation of impotence. For those lacking rhetorical sophistication, Choricius directly stated his lack of sympathy for the miserly father:

I shall mimic the miserly father, though I am not particularly enamored of money and am not a father. My imitation of both qualities comes from my art. [1]

Choricius then takes the rhetorical art of declamation to a higher, parodic level of sophistication.

The miserly father makes outrageous arguments in support of forcing his war-hero son to marry an ugly but wealthy girl. If, as reward for his heroism, the People allow the son to marry the beautiful girl that he loves, they are “playing the part of a sort of pimp.” Moreover, “children will come to neglect parents.” The miserly father argues that the first question a suitor asks is naturally, “How big is the girl’s dowry?” He claims:

different people judge women’s beauty in different ways, and there is much diversity in the matter. You will not find one woman pleasing every man or the same woman consistently pleasing the same men. … What beauty, I ask you, can compete with the fairness of gold? That, I fancy, is why the poets call Aphrodite “golden,” to give the goddess beauty.

No one in the ancient world would believe any of this.

The father characterizes himself as ridiculous. He explains:

I have such a longing for money that I feel towards it very much as lovers of horses or devotees of dogs feel towards their horses or their dogs. They soothe them and talk to them, though the animals have no sense of human speech. I too am often led to talk to my money and I sit beside it, as others sit beside their loves ones

I take the interest owing and at the same time calculate what is to come; as the time draws near, I already know the appointed day, but I still ask about it, wanting to have the profit of its sweet name — just as people who very much enjoy feasts have the date of the festival in mind long before, and yet, as it approaches, ask about it, though they know it well, so as to get extra pleasure from hearing of something which they know and want. Well, what they feel about festivals, I feel about interest payments: they are my festivals!

Contravening norms of personal generosity, the father hosts for his war-hero son a victory banquet only in anticipation of receiving a large, public monetary reward for his son’s military service:

Ever since my son became famous, I dreamed of gold. I walked around, cheerful and smiling, expecting everyone to share my joy and telling everyone that “it’s my boy that won the battle.” Deceived by these enchanting thoughts, I gave my son permission to invite his friends to a victory celebration. There was an expensive drinking party in my house, all young men and indulging themselves unduly. For how could men who were young and happy at the city’s victory, when they were entertained at someone else’s table, possibly eat and drink in moderation? Perhaps they even indulged in some extra luxury because they wanted to annoy me. I warned myself to be patient, consoling myself for the pain of the expense by the expectation of the reward. So when the party had broken up, I weighed into the boy and urged him to summon the Assembly as soon as possible, while the war was still fresh in your minds. Postponements diminish gratitude because they make memory fainter. He said he was convening the People — sooner than I wish — because, as I now understand, he had another reason. When you, the People, were assembled, he advanced proudly on the platform and said a few words about the war (he was in a hurry to get the girl) before asking, as a reward, leave to spend my money {by marrying a beautiful but poor girl}! That’s all the good I have had of my son’s heroism! That’s the fine support I’ve been keeping for my old age!

The miserly father thus make clear that he completely lacks civic virtue. In his concluding argument before the assembled People, this wealthy old miser addresses his son about public venality and hypocrisy:

So long as you have wealth, you have friends, relations, admirers. If you inadvertently spend it, you have spent everything with it. And most important of all: if the wealthy have no virtue, they are deemed to have it; even if the poor have it, it goes unnoticed.

What People wouldn’t rebuff a politician publicly speaking such claims?

Like all good rhetoricians, Choricius made his parody of declamation plausible. Marrying a wealthy woman has obvious advantages for a man, particularly under current child-support and alimony laws. Choricius included in his declamation a vignette with novelistic realism:

So, having successfully made her lover her husband, she will order you to dress her in a splendid tunic and brilliant gold ornaments. She will easily persude you in all this, for no command of the beloved seems onerous to the lover — indeed, he is annoyed if he receives no commands. And if the thought of her previous poverty makes her have more modest notions, the company of other women will soon puff her up, when they say to one another in her presence, raising their voices just enough for her to hear, “She was a fool to think she had a husband who loved her. What can be the affection of a man who doesn’t provide clothes and gold?” When she comes home after hearing such things, she will put on a gloomy face and sit at table without eating, keeping her eyes on the ground and only sullenly consenting when you propose bed. Who, when he sees his beloved behaving like this, would not agree to do anything? And what wealth will suffice to meet such obligations?

Throughout history, men have striven to please their wives and have lived in fear of sexless marriage. Yet these realities are poor arguments for marrying an ugly but wealthy woman.

The war-hero son scarcely needs to argue for being allowed to marry the beautiful girl that he loves. He rightly explains:

Even a poor girl can bring a splendid dowry: a glorious body, a good character, fine housekeeping skills. [2]

The poor girl’s glorious body is first in importance: “invincible is her beauty.” Only after drinking would the son speak of the ugly but wealthy girl whom his father sought for him to marry. The son didn’t even want to recall the ugly girl’s face. The young man stated bluntly, “I put a higher value on beauty than on money.” The son respected his father and behaved toward him in accordance with a fundamental Christian commandment:

In the son’s view, profound respect for fathers doesn’t require him to marry the ugly but wealthy girl that his father favored. The son insisted on marrying the beautiful but indigent girl that he passionately loved.

Women are much more reluctant to marry an indigent person than men are. In twelfth-century Byzantium, a rhetorical exercise addressed the case of Atalanta. She was a figure from ancient Greek myth. Emulating Artemis, Atalanta developed her physical prowess. She trained in archery, hunting, and war. She spent much of her time riding about in the wilderness. The rhetorical exercise challenged the plausibility of the classical Greek story of Atalanta:

concerning Atalanta, daughter of Oeneus, see how far their “wisdom” has fallen short of the truth! For they {ancient Greek poets} make her out to be a woman, but they rob her of the characteristics of a woman, and although they agree that she is a female, they praise her for her masculinity. [4]

Challenging men to footraces, Atalanta promised that she would marry any man who could beat her. She repeatedly outraced men:

A girl competed, and a man was left behind; a woman mastered men, and men were tested and found wanting by a woman.

But is this plausible? Why would any woman do this?

What reason was there in fact for the contest of speed? If she fell in love, why did she not marry her lover? If she did not yet feel the passion of love in her heart, why did she not preserve her maidenhood? Whether one supposes that she was in love or does not concede that she felt passion, there was no reason for the challenge, and she should not have competed.

But let us see if even the proclamation seems reasonable. Let us suppose that she proclaimed a public contest, that she did not bar anyone from the racetrack, and that she opened the doors of the gymnasium to all. What if a man of base appearance, or an indigent man, or a man of low birth should beat her? After the victory he would carry off the prize, and yet that is an even greater insult to a woman than this {losing a footrace}.

For a man not to be an insulting mate choice to a woman, he must not have “base appearance.” That doesn’t imply that he must be beautiful. More significantly, he must not be indigent and must not be of low birth (low social status). Both these factors matter much less to men in marrying women.

Women’s and men’s mate choices have enormous implications for social inequality. Men’s willingness to marry indigent, low-status women has historically been an important source of upward mobility for women. Unfortunately, women don’t naturally support similar upward mobility for men. The female boss doesn’t seek to marry her male secretary, the female professor doesn’t yearn to marry her male graduate student, the female doctor doesn’t want to have children with the male nurse. Thought-leaders and policy-makers must strongly encourage women to choose husbands from within the rapidly growing population of indigent, low-status men.