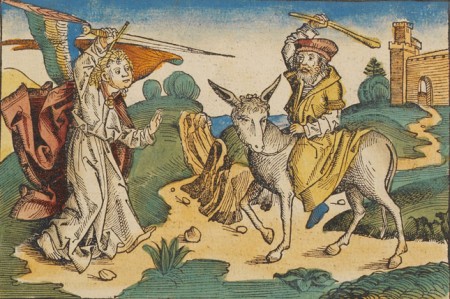 The formal Roman law of pater familias, like the social construction of belief in patriarchy, suppresses and silences the lived experience of almost all fathers. Dominant public discourse has largely worked to support falsehoods functional for disparaging fathers.  Yet occasionally a transgressive challenge has appeared at the margins of public discourse. The Passion of Perpetua and Felicity was such a challenge. In it, Perpetua described the socially marginalized reality of a daughter’s relationship with her father.

When she was arrested on suspicion of being a Christian, Perpetua was about twenty-two years old. She was “well-born, liberally educated, and honorably married.” Although breast-feeding a child, she made time to write. She left a precious, first-person diary of her experiences in prison and on trial. She understood the public importance of what she was doing. Unable to write about her own execution, she wrote “let whoever wishes to write about it, do so.” Her writing should be taken seriously.[1]

The first words of Perpetua’s prison diary describe her father’s love for her. Her father knew that she was planning to declare herself a Christian and be killed. Perpetua wrote, “my father, because of his love for me, wanted to change my mind and shake my resolve.” He tried to argue with her. That of course was futile. He got angry, got in her face, and glared at her furiously.[2] Then he left, having failed to dissuade his daughter from getting herself killed. He stopped coming to her in prison for the next few days. She seemed to have been pleased with her success in turning away her father’s love. She wrote that she was “refreshed by my father’s absence.” In reality, daughters often don’t appreciate their father’s love.

Perpetua’s father tried again to save her. He was “worn with worry” for her. Rather than attempting to argue with his daughter, he sought her pity:

My daughter, have pity on my gray hair, have pity on your father, if I am worthy to be called father by you, if with these hands I have raised you to this flower of youth, if I have preferred you to all your brothers, do not shame me among men.

He also reminded her of her importance to other members of their family:

Perpetua noted that her father acted as a suppliant to her:

My father said these things to me, as a father would, out of his love for me, kissing my hands and throwing himself at my feet. Weeping, he no longer called me daughter, but lady.[3]

These weren’t one father’s extraordinary actions. Perpetua recognized that her father acted “as a father would, out of his love” for his daughter. Perpetua understood that the formal Roman law of pater familias and pater potestas was nonsense.

Fully engaged in care for children from the cradle to adulthood, Perpetua’s father took custody of his baby grandson and cared for him. Biologically he was incapable of breast-feeding the child. However, in the Roman Empire, upper-class families commonly hired wet-nurses for their children.[4] At the same time, oppressive gender norms imposed on men nearly all responsibility for earning money to support the household. That included providing money for purchasing the services of a wet-nurse. Perpetua’s words implicitly indicated the double-burden of child-care and money-earning that fathers carried. Perpetua’s father desperately reminded Perpetua that he and his grandson — her baby son — would be crushed under the double burden of fathers’ work.

Perpetua’s father desperately intervened in her trial. He grabbed hold of Perpetua and attempted to pull her to safety. Disregarding his own life, he pleaded to Perpetua for the life of her child:

Offer the sacrifice. Have pity on your baby.

Spare the gray hair of your father, spare your infant son. Offer the sacrifice for the health of the emperors.[5]

In words that fathers in real life have often heard, Perpetua resolutely responded, “I will not.” Under official questioning, she then affirmed that she was a Christian. That meant death for her. Perpetua choosing death also meant that her infant son would most likely die and that her father would suffer terrible pain, if not death from sorrow and grief. In contrast to the Roman official inserting respect for Perpetua’s father in his plea to Perpetua, the father, out of love and grief for his daughter, in turn disrespected the Roman official. He defied the official proceeding and insistently and continually pleaded with his daughter. The Roman official ordered Perpetua’s father to be “thrown to the ground and beaten with a rod.” That’s extraordinarily harsh and demeaning treatment of a elite Roman citizen.[6] Fathers’ love for children is less strongly supported publicly than is mothers’ love for children. That gender inequality reflects the underlying gynocentrism of human society.

Perpetua’s father was acutely concerned for his grandson’s welfare. After the trial, he retained custody of the baby. That’s extraordinary under formal Roman family law.[7] Perpetua seemed relatively unconcerned about the child’s welfare. Her account is unclear about whether or not the child was with her at particular points in her prison stay.[7] Roman prisons were harsh, disease-ridden places. Perpetua’s father apparently was determined to do the very best he could for his baby grandson.

Perpetua’s father grieved inconsolably about his daughter’s rejection of his pleas and her impending death. Perpetua wrote that after she was sentenced to death:

my father, devastated with worry, came to visit me, and he began to tear out his beard and to throw it on the ground. He then threw himself on his face and, cursing his years, spoke such words to me as might move creation itself [8]

Her father’s grief took Jewish or Jewish-Christian forms. Sacrificing to Roman gods may well have been abhorrent to him.[9] But Perpetua’s father valued his daughter’s life and his grandson’s life far above formal religious ritual. Perpetua grieved for her father’s “unhappy old age.” She, however, didn’t change her life course. She included in her diary two visions that she had about herself. She didn’t have any visions about her father and her young son.

Just as for fathers and daughters throughout history, ancient Roman fathers could tell their daughters what to do. And daughters could do what that they wanted to do, even onto death. That’s the reality underneath the ideology of pater familias and the social construction of patriarchal understanding. The Passion of Perpetua and Felicity has generated an enormous volume of scholarship.[10] That scholarship largely celebrates Perpetua’s actions and ignores her father. One scholar reflected:

This is one of the very rare pieces written by a female hand that is known from antiquity. It was, even in its own day, a small and fragile thing. Yet even this exiguous voice could not be left alone. From the very start it was buried under an avalanche of male interpretations, rereadings, and distortions. What chance, one must wonder, was there for Perpetua to tell her story? Despite all this, there is that other demon – hope. Perpetua’s words are still with us. Her experiences, her thoughts and her visions have, after all, survived.[11]

This “poor dear” understanding of Perpetua (creating a “small and fragile thing”; “buried under an avalanche”; those other men are treating her badly!) is a common pattern of men’s thinking from present-day academic officials, to twelfth-century monks meditating on Mary Magdalene at Jesus tomb, probably back to the first man who had a daughter. Such understanding has perpetuated falsehoods and injustices right up to the present.

Perpetua wrote inspired, revelatory words about her relationship to her father. Those words deserve to be heard throughout the world and taken seriously.[12] Perpetua’s publicly written words are important even if most persons, in their own personal life, already know them.

[1] The Passion of Saints Perpetua and Felicity (Passio Sanctarum Pertetuae et Felicitatis), from Latin trans. Heffernan (2012): “well-born, liberally educated, and honorably married,” II, p. 126; “let whoever wishes to write about it, do so,” X, p. 130. All subsequent quotes from the Passion of Perpetua and Felicity (Passion) are in translation from id., by text section and page number. A translation by R.E. Wallis (1925) is freely available online, as is the translation of Musurillo (1972). Here’s an online review of a few manuscripts. Id. Appendix 1 provides a thorough review of the manuscripts, with some photos of them. The Latin original for the first quote is prefaced by fuller name for Perpetua, “Vibia Perpetua, honeste nata, liberaliter instituta, matronaliter nupta.” Vibia appears to be her nomen, and Perpetua her cognomen. “The Vibbi, attested both in North Africa and in Italy, were a large family of some distinction.” Id. p. 105 (Latin text), 150 (Commentary).

[2] Passion, III, p. 126. A sentence in this section is translated literally: “Then my father, angered by this name {Christian}, threw himself at me, in order to gouge out my eyes.” Some have interpreted this sentence to imply that Perpetua’s father actually assaulted her physically. That’s as ridiculous as believing that her father could literally throw himself. Heffernan (2012) Commentary, p. 157, states:

Her father’s behavior frightened her. She was uncertain, if only for an instant, if he would attack her.

That highly conjectural and highly implausible given the figurative language that Perpetua uses and the sophisticated literary context.

[6] In the redactor’s introduction (II), Perpetua is described as honeste nata (well-born). That indicates that Perpetua was of the upper honestiores class. Heffernan (2012), Commentary, p. 150. Persons of that class weren’t subject to corporal punishment under Roman law. Cooper (2011) p. 694.

[7] In Passion, III, Perpetua initially had her baby in prison. There she worried about the conditions for him and nursed him. Then she entrusted her baby to her mother and brother. Then she arranged to have the baby stay with her again in prison. She expressed delight to have her baby with her. Then, with no further remarks on the matter from Perpetua, her father showed up with the baby in a visit to her (Passion, V).

[9] Heffernam (2012), p. 28, observed, “his behavior reminds one more of an ancient Jew than a Roman male.” If Perpetua’s father was Jewish or Jewish-Christian, sacrificing to Roman gods would have been abhorrent to him.

[10] Bremmer & Formisano (2012) presents recent work. It’s a collection of papers resulting from a 2007 scholarly conference on the Passion. While offering scant consideration of Perpetua’s father, it features on its front cover Gustav Klimt’s Danaë. The Danaë erotically aroused by Zeus’ golden shower here seems meant to suggest Perpetua’s passion for God.  Caroline Walker Bynum noted that she and colleagues taught the Passion “as part of the required syllabus in Columbia University’s western civilization course in the mid-1990s.” She also described the cover of Bremmer & Formisano (2012) as an “egregious misjudgment.” Bynum (2013) p. 135. Friesen (2014) documents pernicious effects of narrow-minded scholarship and teaching about the Passion.

This Roman father, however, does not behave like an elite Roman male. He overturns all our stereotypical understanding of the paterfamilias. … They {Perpetua’s descriptions of her interactions with her father} are the only records which depict such interactions, and should be read with some skepticism.

Heffernan (2012) p. 26. There are no other such ancient Roman records of a daughter documenting in detail tense, momentous interactions with her father. Perpetua’s words should be evaluated with respect to common life experiences of fathers and daughters. Skepticism should be directed at stereotypical understandings of gender relations. One might also be skeptical of the claim in id., p. 38, that Perpetua read and alluded to Plato’s Cratylus. In Roman competition for honor, members of the domus were interested in shielding the pater familias from shame. However, “Perpetua’s self-understanding as a Christian visionary allowed her to expose what the better-socialized members of her family preferred to hide.” Cooper (2007), p. 8.

[image] Balaam, the Angel and the Ass. Woodcut, 1493. Nuremberg Chronicle, f. 30r. Thanks to Wikicommons. For the underlying biblical narrative, Numbers 22-24.