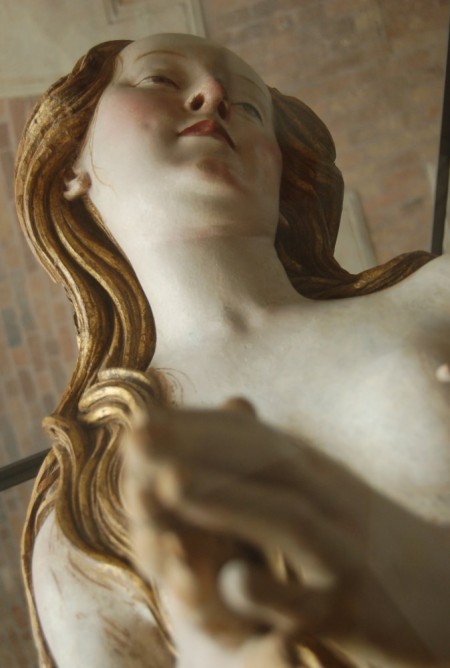 De Maria Magdalena, written in Latin about 1200, responds to the scriptural text of Mary Magdalene standing and weeping at Jesus’ empty tomb. De Maria Magdalena circulated widely in western Europe from the thirteenth to the sixteenth centuries. While probably written for Cistercian monks in France, medieval manuscripts identify De Maria Magdalena as a homily of the early church father Origen.[1] It isn’t your typical father’s homily. It’s theatrical lectio divina. De Maria Magdalena displays from dramatic reading of scripture the beautiful word in the mind of men.

De Maria Magdalena is both highly rhetorical and intensely emotional. It begins:

{Love caused her to stand. Sorrow forced her to weep.} [3]

De Maria Magdalena stands as much as a homily as it weeps like a planctus. Both generic identifiers are incomplete. Mary stood outside the marker. From hearing the scriptural passage, we are to see it and then live it in Christian understanding.

At first, her sorrow was caused by the loss of the living, but at least she was somewhat consoled by believing that she was in possession of the dead. Now, however, she could feel no consolation for that sorrow because she could not find his body. She even feared that the love for her master might grow cold in her breast, whereas by seeing him again it would be rekindled.

As in common among men throughout history, the reader identifies with the woman and depreciates men:

And thus totally oppressed by sorrow of mind and body, she became exhausted and knew not what to do. For what could this woman do except weep, she who felt intolerable grief but who found no comforter, not even Peter and John who had come with her to the tomb but who had departed when they found no body there.

But Mary stood outside the tomb weeping, almost despairing in her tears. Peter and John were afraid and did not stay. Mary was not afraid because she conceived of nothing beyond this which could frighten her. She had lost her master whom she loved in such a way that, without him, she could love nothing and hope for nothing.

The reader shifts without textual concern to first-person address to Mary:

O Mary, what hope, or what purpose, or what emotion kept you standing alone at the tomb? You came before the disciples {Peter and John}, stood with them and remained after they departed. Why did you do so? Were you wiser than they? Or did you love more than they since you were not afraid as they were?

The reader also hears Mary talking to herself in the “poor dear” mode of men’s identification with women:

I have no wish to see the angels. I have no wish to remain with them because they only add to my sorrow; they cannot end it completely. If they begin to tell me many things and if I should wish to respond to all of them, I fear that they would impede my love more than liberate it. … Woe to me in my misery. Where shall I go? Where has my beloved gone? I looked for him in the tomb and I did not find him; I called to him and he did not answer me. .. O wretched me, I do not know where to search. To leave the tomb is death to me. Yet to stand at the tomb is an incurable sorrow. It is better for me to watch over the tomb of my lord than to go far away from it. For if I go far away, perhaps when I return I shall find him dead or missing. Therefore, I shall stay and die here so that I shall be buried near the tomb of my lord. O how blessed my body will be entombed near my master! [4]

O dearest Jesus, … how could this loving woman have offended the sweetness of your heart that you withdraw from her so? We have not heard that she committed any sin except that she came early in the morning to the sepulcher before the others, carrying oils to anoint your body, and when she did not find you in the tomb she ran and told your disciples. They came, saw, and departed. But this woman stood and wept. If this be sin, we can not deny that she committed it.

The position of “we,” the community of monks, is as an advocate for Mary Magdalene to Jesus. While that advocacy includes common patterns of gendered discourse, it’s nonetheless an extraordinary position for medieval monks to assume. Mary Magdalene was recognized as a saint in medieval Europe. She was institutionally positioned to intercede for men. But the monks, with psychological realism and deep spiritual empathy, dramatically interceded for her.

Do not consider the error of the woman but the love of your disciple when she cries and says, not in error but for the sake of love and sorrow, “Sir, if you have taken him, tell me where you have placed him.” O how knowing her ignorance; how learned her error when she said to the angels, “They have taken my lord away.” She did not say “you have taken away and you have placed,” since it was not the angels who removed you from the tomb nor put you in another place. How true were her words when she said to you, “If you have taken him away and placed him,” because it was really you who removed the body from the sepulcher and replaced it with your {glorified body}. [5]

As Jesus needs to be persuaded, the reader understands that Mary only superficially misperceived Jesus as the gardener. Jesus is truly a gardener because he plants good seeds in the hearts of Mary and the faithful. Mary asks the gardener, but not the angels, to tell her where the body is because because she implicitly recognized the gardener to be Jesus. In her great love for Jesus, she echoed the words of Jesus to her and Martha lamenting the death of Lazarus. After the reader’s explication of these facts, Jesus should understand.

The reader imagines Mary Magdalene to be more courageously Christian than “the prince of the apostles” Peter. Meditating on the words of scripture, the reader imaginatively creates a new sacred drama:

The reader responds emotionally to his own imagined sacred drama of Mary Magdalene, understood as a repentant prostitute:

O, the boldness of a wretched woman. O woman, a woman not welcomed anywhere, however, who asked for nothing, says fearlessly and promises absolutely, “Tell me where you have put him and I will carry him away.” O woman, how great is your constancy, how great is your faith.

While imagining Mary to be more courageously Christian than Peter, the reader again intercedes for her with direct address to Jesus:

I beseech you, sweet master, do not seek to prolong her desire since, for three days now, she has endured your absence, you who satisfy her hungering soul. … If you do not wish her to continue languishing on the way, then refresh and comfort the depths of her soul with your sweet taste. For you are the living bread who contains all delight and taste of sweetness in you. She will not be able to live very long in her body unless you quickly manifest yourself, you who are the life of her soul.

The reader then narrates Jesus calling out to her, “Mary.” Mary turns and addresses Jesus as master. She touches him. With poetic language the reader narrates the emotional transformation:

Regardless of men’s propensity to compete over status, that is the Christian story of Easter for Mary, Peter, and all Christians.

De Maria Magdalena concerns a scriptural text that has under-appreciated drama.  After Mary addressed the angels sitting in the tomb, she turned around and saw Jesus:

If you read that scripture in its external drama, you might understand actions scripture didn’t explicitly describe. The scriptural text implies that Mary turned away from the gardener when she spoke to him about carrying the body away. Jesus apparently called out “Mary” when she had her back to him. Then she turned again and recognized the gardener as him. After she called out to him, “Rabbi,” she apparently reached out and touched him insistently. That implicit action motivates Jesus’ words, “Do not cling to me.” None of this drama was of interest to the reader in De Maria Magdalena.

De Maria Magdalena is primarily a dramatic reading of scripture in its internal, emotional dimension.The actions of standing and weeping point internally to the emotion of love. In De Maria Magdalena, love and closely associated emotions motivate movement among different persons’ voices. All the voices are inflected with men’s deep preference for women. With its exquisitely constructed rhetorical forms, rhythms, and rhymes, De Maria Magdalena represents words of love as beautiful.

[1]  Over 130 Latin manuscripts of De Mari Magdelena have survived. Origen wrote in Greek. De Mari Magdelena was clearly composed in Latin. For this and other reasons, Origen surely didn’t write De Mari Magdelena. The work may have been attributed to Origen to give it ancient authority. That attribution could have resulted from “omelia oriensis” (homily from unknown author) being scribally corrupted into “omelia origenis.” McCall (1971) pp. 492-5, esp. n. 11.

[2] Delasanta & Rousseau (1996) provides both a Latin text and an English translation. All the quotes from De Mari Magdelena are from id., with some minor changes that I have made. For example, in the above quote, I have translated “ad monumentum foris” as “outside the grave-marker.” Id. has “outside the tomb.” My translation brings out more the text’s concern for signification. Id. variously translates “monumentum” as “tomb” and “sepulcher.”

[3] The ornate, poetic prose of De Maria Magdalena has similarities to popular medieval Arabic and Hebrew maqama in combining aspects of prose and poetry.

[8] De Maria Magdalena ends with a shift from direct address to Jesus to moral application:

Let us imitate, brothers, the affection of this woman. Let each of us cry to Jesus since he did not hide himself from the woman sinner who sought him. Learn this, sinner, from the woman who sins were all forgiven. Learn to weep because of the absence of God and to desire his presence. … I dare to promise you confidently that if in faith you stand at the tomb of your heart, if crying you search for Jesus, and in seeking persevere, if you bow in humility, if by the example of Mary you wish to receive no other consolation from Jesus except for him when he reveals himself, you will find him and then recognize him so that it is unnecessary to ask others where Jesus is, but rather you will proclaim him to others since “I have seen the Lord and he said unto me,” to whom there is honor and glory with the Father and the Holy Spirit forever and ever. Amen. Thus ends the homily of Origen.

The awkwardly connected final doxology seems to have been appended to an earlier composition, as was the concluding specification “homily of Origen.” A prologue appears in some manuscripts:

As I prepare to address you, dearly beloved, on this present solemnity, I am put in mind of how, by loving our Lord above all else, the blessed Mary Magdalene …

Trans. Waddell (1989) p. 53. On the manuscripts, McCall (1971) pp. 492-3. This prologue seems to me to be of different style than the main text and a likely addition. Assimilating De Maria Magdalena to a homily seems to have begun early in its textual history. The work has attracted little recent attention, mainly by Chaucer scholars. Delasanta & Rousseau (1996) p. 319, Gross (2006).