Persons who consider a book to contain the words of God read those words very carefully.  But a human being, even a fashion-besotted English professor (Discourse! Discourse!), makes sense of words with more than words.  Consider this story:

Jesus went away from there and withdrew to the district of Tyre and Sidon. And behold, a Canaanite woman from that region came out and was crying, “Have mercy on me, O Lord, Son of David; my daughter is severely oppressed by a demon.” But he did not answer her a word. And his disciples came and begged him, saying, “Send her away, for she is crying out after us.” He answered, “I was sent only to the lost sheep of the house of Israel.” But she came and knelt before him, saying, “Lord, help me.” And he answered, “It is not right to take the children’s bread and throw it to the dogs.” She said, “Yes, Lord, yet even the dogs eat the crumbs that fall from their masters’ table.” Then Jesus answered her, “O woman, great is your faith! Be it done for you as you desire.” And her daughter was healed instantly.

The House of Israel regarded Canaanites as accursed, sexual idolators fit to be pushed aside or destroyed. A woman of this time would not normally come, without men of her family or tribe, into the company of men of another tribe.  Being oppressed by a demon was generally considered to be retribution for evil acts.  A normal reaction of persons of the House of Israel to the Canaanite woman in this story would be not to speak to her, to tell her that she does not belong there, and to disparage her.  In this story, Jesus, son of David of the House of Israel, displays each of these reactions to the woman. 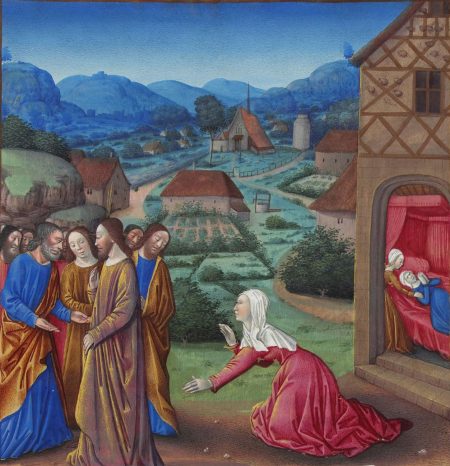 The put-down Jesus directs to the Canaanite woman is witheringly de-humanizing:  “It is not right to take the children’s bread {the bread of the persons of the House of Israel} and throw it to the dogs {to persons like the Canaanite woman}.”  Those words hurt.  Jesus, as described in most of the words of the Bible, doesn’t seem like a person who would say that. Persons today disagree significantly about who Jesus was or is. But almost everyone agrees that Jesus was a gentle, nice guy.  Jesus perhaps also showed more empathy for women than might be thought appropriate for a manly man.

I think that Jesus knew the value of play and that he had a godly sense of humor.  In the above story, Jesus  mocks the normal reaction of his disciples from the House of Israel.  He’s probably caricaturing them with gesture, facial expression, and posture.  Jesus’ disciples, other than the unnamed ones in the story, probably relished acting and telling this story. If a Sunday-school teacher presents it with severe earnestness, the story is nearly incomprehensible.  To understand it, you have to start with laughing at the foolishness of persons like yourself.

The Canaanite woman would not have enjoyed the first part of her experience in Jesus’s play.  But enduring a trial as a plaything of a god was not considered at the time to be unusual or degrading.  Odysseus, a hero in the intellectually dominant Greek culture of the time, experienced many such trials.  The Canaanite woman addresses Jesus as Lord and master, receives healing for her daughter, and emerges as the hero of the story.  A fair sense of this story excludes believing that the woman was treated unfairly.

Human performance incarnates words.  Without a sense of performance, you lose the fullness of words.

The passage about Jesus and the Canaanite woman quoted above is Matthew 15:21-28 (story of the exorcism of the Canaanite / Syrophoenician woman’s daughter), translated from the Greek. In his lost tragedy Cretan Women, Euripides wrote: “It’s customary to throw the dinner left-overs to the dogs.” Athenaeus, Deipnosophists 3.96f, from Greek trans. Olson (2007) p. 527.