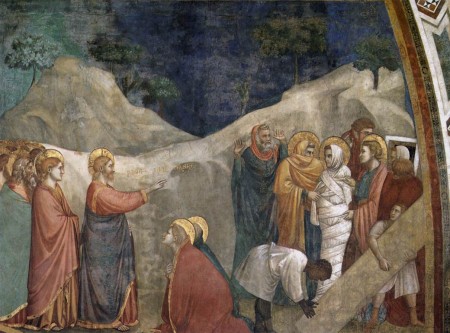 The Gospel of John states:

Jesus cried out with a loud voice: “Lazarus, come out!” The dead man came out, his hands and feet bound with strips of cloth, and his face wrapped in a cloth.

Just imagine that scene. It’s like something out of a zombie apocalypse. It’s not like a fairy-tale kiss bringing a sleeping beauty to life.

Lazarus was the brother of Mary and Martha. Mary wiped Jesus’s feet with her hair. To anyone in the ancient world, Mary’s action would have been completely disgusting.

Lazarus’s dead body had been in the tomb for four days. In the warm climate of the eastern Mediterranean, the dead body would rot and stink. In the Gospel of John, Martha explicitly expressed concern about the stench of Lazarus’s body. Jesus was unconcerned. Jesus wasn’t a Greco-Roman hero living high above human stench.

Martha, who spoke her mind and acted to get tasks done, complained to Jesus that he was late in coming to care for Lazarus. Ignoring Martha’s engagement in her immediate circumstances, Jesus said to her:

I am the resurrection and the life. Those who believe in me, even though they die, will live, and everyone who lives and believes in me will never die. Do you believe this?

Yes, Lord, I believe that you are the Messiah, the Son of God, the one coming into the world.

Jesus’s statement and Martha’s response are at the heart of Christian faith. Christian faith beats within the outlandish, improper, stinking reality of the world.

Other ancient literature has generic similarities to the accounts of the life of Jesus, the Gospels. The Gospels are episodic, set in ordinary life, and interspersed with parables. The Life of Aesop similarly is episodic, describes mundane circumstances, is interspersed with fables, and leads to Aesop’s death. Like the Gospels, the Life of Aesop directly challenges elite culture from below. Apuleius’s Metamorphoses intersperses tales in an account of Lucius’s fall into beastly being and then his salvation. Metamorphoses mixes culture across a wide range of high and low in valuing sensational entertainment over the public honor of engaging in serious thought.

In the market of human minds, the Gospels have vastly out-competed all other Greco-Roman literature over the past two millennia. That obvious symbolic-market victory has promoted misunderstanding. The Gospels are strange, subversive literature that meets a disjointed world.

The death and raising of Lazarus is in John 11:1-44. The style of the story of Lazarus is similar to other depictions of Jesus engaged in healing in the Gospel of John.

Literary scholars now tend to see the Gospels within the Greco-Roman literary genre of βίος (account of a life) or the cult narrative of a dead hero. Burridge (2004) and Wills (1997). Neil Godfrey at Vriday provides a good review and critique of Burridge.

Wills, Lawrence M. 1997. The quest of the historical gospel: Mark, John, and the origins of the gospel genre. London: Routledge.