Under pervasive personal surveillance and powerful forces of social coercion, the bounds of acceptable public discourse today are tighter than in earlier, more liberal times.  Consider, for example, the public record of Jesus’ healings in the Gospel of John.

In Jerusalem, Jesus encountered a multitude of invalids near the Bethesda pool.  A man who had been ill for thirty-eight years complained to Jesus, “Sir, I have no man to put me into the pool when the water is stirred up, and while I am going down, another steps down before me.”  The invalids thought that the stirred-up water provided healing.  When the water stirred up they raced to get in.  The man, apparently feeble, always lost that race.  Jesus said to him, “Rise, take up your pallet, and walk.”[2]  Instantly the man was healed.  Healing didn’t require a long stay at a prominent health-care facility and securing access to a scarce healing service.

Jesus’ healing of the official’s son and Jesus’ healing of the invalid at the Bethesda pool are decorous representations of divine powers.  Anything is possible for God.  God willing, it will be done.  The scope of healing discourse in the Gospel of John, however, is much broader than that of august divinity. 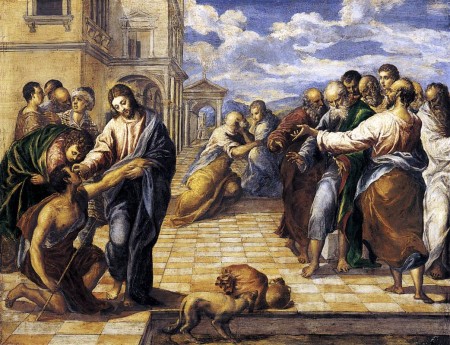 According to the Gospel of John, Jesus and his disciples saw a man blind from birth.  Greco-Roman religious traditionalists, Jews, and Christians tended to understand sickness and physical disabilities as divine punishments.[3]  Jesus’ disciples asked him, “Who sinned, this man or his parents, that he was born blind?”  Jesus answered:

It was not that this man sinned, or his parents, but that the works of God might be made manifest in him.

He spat on the ground and made clay of the spittle and anointed the man’s eyes with the clay, saying to him, “Go, wash in the pool of Siloam” (which means sent).  So he went and washed and came back seeing. [4]

This illness is not unto death. It is for the glory of God, so that the Son of God may be glorified by means of it.

Jesus waited two days before traveling to see Lazarus.  By the time Jesus arrived to heal Lazarus, Lazarus had already died and been entombed for four days.  Lazarus’ sisters were distraught that Jesus had taken so long to arrive.  Jesus told one of the sisters to open Lazarus’ tomb.  The sister responded with earthy sense, “Lord, by this time there will be an odor, for he has been dead four days.”  Nonetheless, the sister obeyed Jesus’ command.  When the tomb was opened, Jesus cried out in a loud voice, “Lazarus, come out.”  Then occurred a joyous, comic wonder:

The dead man came out, his hands and feet bound with bandages, and his face wrapped with a cloth.[5]

The Gospel of John did not have to include these earthy details.  Today such details seem inconceivably ridiculous, particularly in contrast to august divine, healing also included in the Gospel of John.

[1] John 4:48, 50.  All quotes are from the Revised Standard Version translation.  The Blue Letter Bible website provides a wide variety of translations, as well as the underlying Greek.

[3] Nutton (2013) Chs. 7, 13.  At the same time, they developed secular healing techniques and practices: “religious and secular healing re-enforced rather than opposed each other.”  Id. p. 115.

[6] Some Christians have refused to look honestly at earthly life and the dirt.  For example, El Greco’s painting of Jesus healing the blind man, shown above, minimizes the sight of the bare earth.  That painting is from about 1567.  A similar composition by El Greco shows no earth at all.  Of course, seeing the good earth must be humanely distinguished from wallowing in mud.

[image] Christ healing the blind, El Greco, c. 1567, thanks to Wikipedia and the Web Gallery of Art.