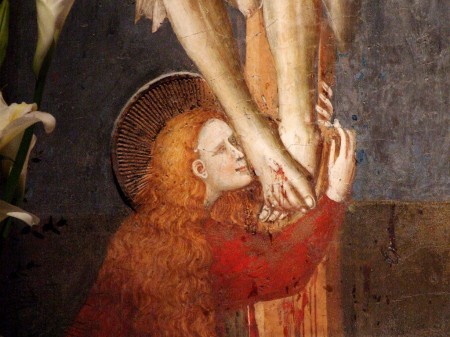 According to the Christian New Testament, seven demons were cast out of Mary Magdalene. She stood by Jesus at his crucifixion. She was at his tomb when he was buried. She was the first person Jesus addressed after his resurrection.[1] Nowhere in the Bible is Mary Magdalene explicitly described as a prostitute.

Ancient lives of saints include stories of women who worked explicitly as prostitutes and became holy women. Saint Thais, thought to have lived in fourth-century Roman Egypt, earned great wealth as a high-class prostitute. She gave up all her wealth and became a woman religious and a saint. Saint Pelagia was a leading actress, dancer, and prostitute in ancient Antioch. She repented and became a famous holy woman. Saint Mary, the niece of the monk Abraham, sinned against the Christian faith and in despair went to work in a brothel. Abraham heroically rescued her. She became a devout nun. Saint Mary of Egypt desired sex with men so much that she didn’t want to deter any of them by charging them for sex with her. She subsequently became a leading desert mother. Identifying Mary Magdalene as a prostitute associated her with these other women saints.

Identifying Mary Magdalene as a prostitute tends to separate her from men. Relative to women, men historically have lacked equal opportunity to become prostitutes. In the Christian Bible, Jesus told the chief priests and elders of his people that tax collectors and prostitutes were entering the Kingdom of God ahead of them. Mary Magdalene could have been identified as a tax collector or some other type of bureaucrat.[4] Imagining Mary Magdalene as a bureaucrat would help men to identify with her and to recognize that they too could be privileged in entering the Kingdom of God.

[2] Ward (1987) Ch. 2. In a homily in 591, Pope Gregory I (Gregory the Great) identified Mary Magdalene with the Mary who kissed and anointed Jesus’ feet in Luke’s gospel and with Mary of Bethany, the sister of Martha and Lazarus. Homily 33, from Latin trans. Hurst (1990). Those associations was probably common at least two centuries earlier. Ward (1987) p. 13. Names tended to be less standardized and less widely distinguishing among ordinary persons in the ancient world. Hence distinguishing among different persons based on different uses of the name Mary isn’t straight-forward.

[3] Luke 7:36-50 (sinful woman washing and anointing Jesus’ feet); Matthew 21:31 (tax collectors and sinners entering heaven ahead of hypocrites). In the Passion Play from the Carmina Burana (dated 1220 to 1230), Mary Magdalene encompassed all three Mary’s of the Gospels. Moreover, she sings in Latin and German, purchases expensive cosmetics from a merchant, and praises worldly delight:

The world’s delight is sweet and lovely,
its way of life is soft and adorned.
For the world’s allurements I burn willingly —
I’ll not shun their voluptuousness.

Men of excellence, love
women apt for loving.
Love exalts your inner joy
and lets others see you in high honor.

CB 16* (additional), vv. 441-4, Middle High German text from Trail (2018) v. 2, p. 529, English trans. (modified insubstantially) from Dronke (1994) p. 205. Being awaken twice by an angel prompts Mary to reject her past way of life and sins. Understanding Mary Magdalene to be a repentant sinner is a reasonable interpretation of scripture. But that interpretation isn’t necessary. Other interpretations are also reasonable.

One thought on “how Mary Magdalene became a repentant prostitute”