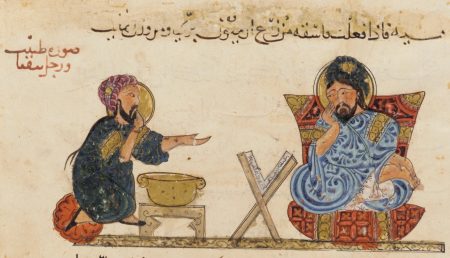 Some would restrict “miser” to a person impulsively hoarding money. Such tight thinking is mistaken. Being a miser entails a complex, ongoing, and demanding struggle against reason and human nature. The challenges of being a miser have never been as richly and fully described as al-Jahiz did in his lengthy, ninth-century book given over completely to misers. Al-Jahiz’s book overflows with letters, testimony, stories, tales, quotes, anecdotes, and glossaries about misers. Just three sentences from al-Jahiz’s book offer much more meaning than subsequent writing about misers has been able to provide.

Al-Jahiz’s book begins with a letter to his unnamed patron. Within that letter, al-Jahiz recounts at length his patron’s request for a book on misers. Among the patron’s many, detailed questions about misers were these:

What is going on in the miser’s mind when he notices other persons’ shortcomings when they entertain him to a meal, but doesn’t perceive his own when entertaining them, even though his own shortcomings are blatantly evident and those of the person entertaining him are not openly apparent? Why is this sort of miser lavish with any amount of gold or silver while stingy with a few bits of bread, even though well aware that what he has kept back is paltry beside what he has so lavishly dispensed? If he should want to get in return a mere fraction of what he has spent so liberally, which was many times over that with which he was so stingy, the return, a mere trifle, would flow into his hands. [1]

The bread miser who is generous with money is aware of the net material benefits of being generous with bread. But he’s unable to act based on his awareness. Speaking on behalf of the miser, the patron generously presents his questions to al-Jahiz, or at least so recounts al-Jahiz in the lengthy space he gives over to his patron’s words.[2] In al-Jahiz’s work, what it means to be a miser requires extensive, generous consideration.

Literary history has not been generous to al-Jahiz’s work on behalf of misers. The popular Arabic press has tended to tear off choice morsels from his work to feed to their audiences. Elite classical Arabic writers have also cut back on al-Jahiz’s meaning. About a millennium ago in a wisdom book for the ruler of Khwarezm, an eminent Arabic writer recorded:

Some early authority has said: “If there is anything that resembles being a deity, it is feeding people. How few are the princes that are characterized by this noble quality, and how numerous are those among them that are generous with large gifts but stingy with the least bit of food!” [3]

The base issue corresponds to that which the miser shared with al-Jahiz’s patron. Yet here, nothing more than the issue of inconsistent generosity is offered. The prince is merely instructed to be generous with food, especially if he is generous with large gifts.

Another eminent Arabic writer from about a millennium ago shifted focus from social prestige to personal psychology. An important man sought to host guests for dinner. The man, however, couldn’t cope psychologically with seeing and hearing his guests chewing his food. He confessed his unusual personal difficulty to a close friend. That friend suggested preparing food that guests could swallow without chewing. The man, grateful to his friend for this ingenious suggestion, prepared such food. The man then invited guests to his table:

the man sat in a room overlooking them so that he could watch how they ate. After a while, his friend with whom he was on intimate terms went up to see him and found him unconscious. So he waited until he regained his consciousness and then said to him: “How are you, Sir, and what hit you?” He said: “My friend, swallowing, by God, is harder on me than is chewing!” [4]

Even if one recognizes the social benefits of being generous, personal psychological difficulties can be a serious impediment to realizing those benefits. More generally, focus on self characterizes misers. This story of the man’s psychological problems has less rich and expansive meaning than the miser’s consciousness that al-Jahiz’s patron shared.

Literary stinginess is an acute problem today. Because readers don’t recognize the benefits of reading medieval Latin literature, they don’t read it. Readers grasp and hold Aesop within the genre of children’s literature. They dismiss men’s literature of sexed protest as being nothing more than anti-feminism and misogyny. We must recreate a culture of literary generosity like that exemplified in al-Jahiz’s book on misers.

[2] For a thorough analysis of the introduction to On Misers, Hefter (2014) Ch. 4. Hefter presents the reader’s task as “discerning the author’s true intentions.” Id. p. 216, similarly, p. 217. That’s an overly possessive understanding of reading.