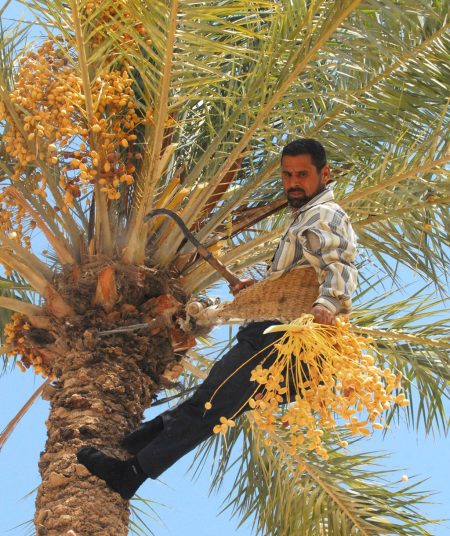 Ninth-century Arabic literary master al-Jahiz took mundane stories and weaved them into subtle, complex literature. In his book On Misers, al-Jahiz recounted many stories that he explicitly attributed to named others. But a story about a man from Banu Assad al-Jahiz attributed to himself:

By us, here’s a story about a man from Banu Asad. When a fieldworker’s son climbed a palm tree of his to pick ripe dates for him, he filled his mouth with water. For this, others made fun of him, saying: “He swallows it and eats some while up the palm tree. When he wants to come down, he pisses in his hand and holds it in his mouth.” [1]

Al-Jahiz injected a discrediting comment into his own story:

Ripe dates are much too easy to come by for field labourers’ boys, and for those whose fathers are not field labours, for anyone to resort to half of so disgusting a trick as this or even some of it.

Al-Jahiz then immediately continued with an apparent third-personal reference to himself:

He continued: “After this, he would fill his mouth with water coloured yellow, red or green, so that he would be unable to do any such thing at the top of the palm tree.”

Making sense of this story seems to hinge on the color of the boy’s piss making it indistinguishable from water. That’s incredible. Are you as a reader willing to allow that? Interpreted narrowly, this miser story is disgusting. But it also invokes wonder about willingness to tell stories. Are you generous enough to recognize its larger literary merit?

Classical Arabic literature developed within a culture of broad-minded, generous reading. A tenth-century commentator collected the best lines of early Arabic invective poetry.  Among those lines were these:

People who, when the approaching guests make their dogs bark, say to their mother, “Piss on the fire!” [2]

In a tight-minded reading, those people are misers. They don’t want to extend hospitality to guests. In the U.S., “piss on the fire and call in the dogs” is a reputed, probably fabricated, cowboy saying. But can you imagine telling your mother to piss on a fire? Can you imagine her quickly doing that in front of you? The literary merit of this invective includes imagining reasoned behavior far more outrageous than not being hospitable within a culture that exalts hospitality.

Persons can be crude and disgusting in many ways. Embedding such behavior in a meaningful context and giving it perverse force of reason requires literary genius.

[1] al-Jahiz, On Misers (al-Bukhalāʼ), from “A Miscellany of Eccentricities” (following “The Tale of Ibn al-‘Uqadi”) from Arabic trans. Serjeant (1997) p. 115, adapted non-substantially for readability. The subsequent quote is from id.

Al-Hatimi may be a minor poet, but his career, manifest in his prolific writings on poetry, defines him as a ‘serious’ commentator on poetry, if not an important critic, distinguished by his knowledge of poetry, understanding of poetics, and mastery of the poetic craft, well, at least in theory.