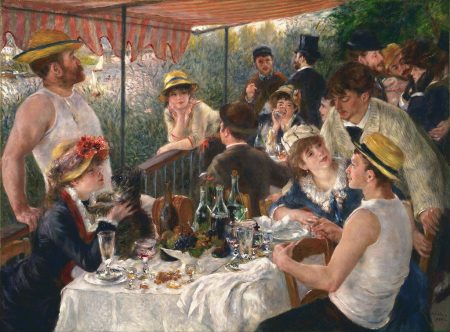 Early in the sixth century in the prominent north African city of Carthage, Luxorius wrote a poem about the burden of receiving hospitality. Arabic tribal culture within Carthage probably contributed to an ethos of generosity. But as al-Jahiz’s masterful work on misers highlights, generosity can be burdensome to its recipients.

I am happy that you frequently feast me
sumptuously, Blumarit, and with proud extravagance.
At whose expense am I being fed? Whatever I own
has been scattered among your guests. I did not want
you to feed and invite anybody else with me lest
anything be given to you for feeding us.
But if you are addicted to this failing,
I beg of you never to invite me.
{Gaudeo quod me nimis ac frequenter
Ambitu pascis, Blumarit, superbo.
Unde sed pascor? Mea sunt per omnes
Sparsa convivas bona. Nec volebam
Pasceres quemquam peteresque mecum,
Ne tibi quicquam detur unde pascas.
Hoc teamen sed si vitio teneris,
Me precor numquam iubeas vocari.} [1]

The sponger or parasite, living off the generosity of others, is a stock figure in ancient literature. Luxorius, in contrast, complains of being impoverished by Blumarit’s hospitality.[2] Blumarit apparently is a Germanic name meaning “flowery.” That probably indicates that he has ties to the the northern European tribe (Vandals) that conquered Carthage in 439 GC. Luxorius seems to have been a government official in Carthage.[3] At Blumarit’s frequent and extravagant banquets for Luxorius, guests apparently competed to offer each other and the hosts gifts. In a comical reversal, the effect was to push Luxorius toward starvation.

[1] Luxorius, Poem 40 (De eo qui amicos ad prandium clamabat ut plura exposceret xenia / About a Man Who Used to Invite His Friends to a Meal That He Might Ask for Many Gifts), from Latin trans. Rosenblum (1961) pp. 134-7, which also includes the Latin text. I’ve added lineation to make exploring the Latin easier. I’ve also made a few minor changes to the translation.

Do not eat food each day with someone who is richer than you, for if you happen upon him, he will receive you with his daily supplies, but if he should happen upon you, you will pay out your gleanings of 30 days on him, and afterwards, you will lay yourself waste.

[2] I refer to the poem’s “I” as Luxorius for convenience. The first-person speaker can be read as a constructed poetic voice. Antithesis is a characteristic of Luxorious’s poems. Consider some lines from Poem 43 (In eum qui foedas amabat / Against a Lover of Ugly Girls):

Myrro loves hideous and ugly girls.
On the other hand, he fears any beautiful girl he sees.
…
Yet I now know why you seek such lovers.
A beautiful girl will never give herself to you; an ugly one may.
{Diligit informes et foedas Myrro puellas.
Quas aliter pulcro viderit ore, timet.
…
Iam tamen agnosco cur tales quaeris amicas.
Pulcra tibi numquam, se dare foeda potest.

[image] Luncheon of the Boating Party. Oil on convas painting by Pierre-Auguste Renoir, 1880-1, France. Held in the Phillips Collection, Washington, DC. Thanks to Google Art Project and Wikimedia Commons.