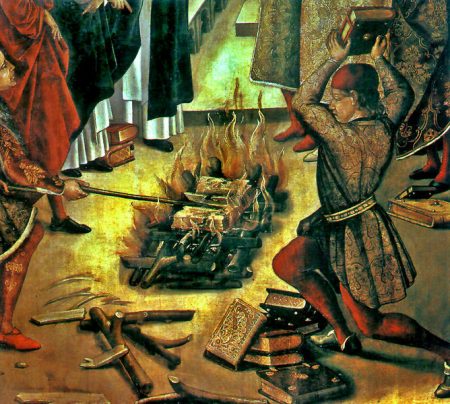 Like the ninth-century Arabic rhetorician al-Jahiz writing on misers, Konstantinos Akropolites engaged in subtle irony in disparaging the Timarion. Akropolites blandly praised the Timarion’s account of the festival of Saint Demetrius of Thessalonike:

I cannot imagine what motivated him to attack the Christian faith. It is all the more strange since, by starting with the festival of the famous martyr St. Demetrius, he did make a good and appropriately solemn start before degenerating into his quite unsuitable tale. [2]

Saint Demetrius was the patron saint of the western European crusaders who took Antioch from the Turks in 1098, and then brutally took Constantinople from the Byzantines in 1204. In Byzantine eyes the crusaders were barbarians. The barbarians enlisting Demetrius as their patron saint directly concerned Byzantium:

there is no doubt that Byzantium was very much on the minds of crusaders at Antioch. They had sound reasons to expect Emperor Alexius to come to their aid and grew increasingly disappointed when he did not. … the appearance of Eastern saints in two of the early narratives of the battle of Antioch was intended to make a powerful statement not only about the worthiness of the crusaders, but also about the unworthiness of Byzantium. When Demetrius and other saints joined the crusaders, they abandoned the Byzantines. … the claim that Demetrius intervened on the side of crusaders was conceivably a reproach to Emperor Alexius in person. [3]

The Timarion used the festival of Saint Demetrius in Thessalonike to represent political difference:

The staging itself of this story in Thessalonike inevitably highlights the crucial divide between the Western present of the empire and its Eastern past. Timarion is a Cappodocian visiting this city in the Western part of the empire. He draws his origins from lost Byzantine territory, which, at that time, lay beyond the empire’s eastern frontier. His presence in Thessalonike puts the loss of the east in stark relief. Timarion accentuate this loss by listing the nations visiting the fair. These are mostly Western Europeans, as well as “Greeks” from Boeotia and the Peloponnese. The few Eastern visitors are from areas outside the empire, like Egypt, Phoenica and the Black Sea. … If Thessalonike attracts the Western Byzantines and numerous foreigners, the representatives of the Byzantine East are to be found in Hades. [4]

Konstantinos Akropolites probably recognized the struggle for Saint Demetrius and the political differences that the Timarion represented in Thessalonike and Hades. Akropolites staunchly opposed Byzantine Emperor Michael VIII Palaiologos moving toward union with the Church of Rome. Akropolites’s praise of the Timarion’s “good and appropriately solemn start” — the tale of Timarion’s journey from Constantinople to Thessalonike and his experience of the worldly festival of Saint Demetrius there — creates suspicion of irony.

The conclusion of Akropolites’s letter makes its ironic rhetoric more clear. The Timarion probably was written in the twelfth century. Writing more than a century later, Akropolites describes the author of the Timarion as an “oldish barbarian who came late in life to catch up with things here in Constantinople.” That extra-textual assertion reverses the polarities of Timarion’s journey to Thessalonike. If the Timarion’s author actually was an “oldish barbarian” who migrated to Constantinople, he quickly gained detailed knowledge of Byzantine intellectual figures and culture. In any case, Akropolites then ostensibly moved toward an extremely crude form of intellectual interaction:

as soon as I had got to the end of his book {the Timarion}, I felt I should consign it to the flames so that in the future it would not fall into the hands of any Christian. And my intention would have become a fait accompli had not the sense of respect for a fellow believer which I have long maintained intervened to stop me. This held my hand, so to speak, and restrained me from my intent, thus saving this insane book from the fate which I think it so richly deserves.

So, my godlike friend, I have disclosed to you what I think about the enclosed volume. In return, I want very much to have your opinion.

Akropolites’s letter is literally unreasonable. After harshly and unequivocally condemning the Timarion for madly disrespecting Christian truths and reviving pagan myths, to his godlike friend Akropolites declared “I want very much to have your opinion.” If the Timarion truly offended Akropolites, or if he actually believed that outrageously impious work should be harshly repressed, he wouldn’t have circulated it further. With a literal reading of his letter, Akropolites sending the Timarion to his godlike friend and seeking his opinion makes no sense.[5]

Akropolites asserted that his piousness toward his godlike friend stayed his hand and stopped him from burning the Timarion. Backing away from burning a book is at the center of an elaborate, concluding rhetorical figure in the mid-fifteenth-century Spanish masterpiece of men’s sexed protest, The Archpriest of Talavera. Akropolites’s concluding rhetoric is best interpreted as figuratively drawing upon Abraham’s binding of Isaac.[6]

Here is the inner meaning of Akropolites’s letter about the Timarion. I send you an outrageously impious text. If you are a sophisticated intellectual, read it and enjoy it. No harm will come of this.

[1] Biographical information about Konstantine Akropolites is from Baldwin (1984) p. 26 and the Oxford Dictionary of Byzantium (Kazhdan, ed.), heading Constantine Akropolites. He wrote more than thirty lives of saints. That shouldn’t be understood to mean that he was an austerely pious persons. Akropolites died in or before May 1324.

[2] Konstantine Akropolites, letter to a friend, from Greek trans. Baldwin (1984) pp. 25-6. All subsequent quotes from the letter are from id.

The shade of the hero Neoptolemos/Pyrrhus – who had been unjustly murdered at Delphi by Orestes – appeared when Delphi was attacked by the Gauls in 279 BCE. As a cultic hero and defender of the city, Neoptolemos is a parallel to the martyr Demetrios, whose cult and fame exploded precisely in response to his role in defending Thessaloniki from a different set of barbarian invaders from the North: the Slavs and Avars. It was in this guise – as a bulwark of the city against foreign invaders – that Demetrios was most well-known throughout Byzantine history, even as he is to the present day.

[5] Both Kaldellis and Krallis read Akropolites’s letter literally and give it considerable weight in their interpretations of the Timarion. Kaldellis (2007) p. 277; Krallis (2010) p. 221.