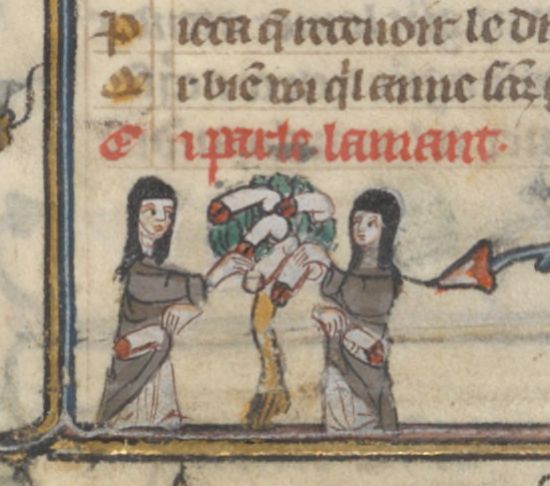 In the Bavarian abbey at Tegernsee no later than the twelfth century, a woman student was in love with her man teacher. She wrote to him a passionate love letter. That letter began thus:

To H., flower of flowers, crowned with the garland of courtliness,
model of manliness, the ultimate standard of manliness,
N., who is like honey and without gall like the turtledove,
sends whatever is joyous, whatever can be worthwhile
in present life and whatever is sweet in eternal life,
what love Thisbe had for Pyramus and finally, after all, sends herself,
and then again herself, and whatever she has better than herself.

Pyramus killed himself out of love for his beloved woman Thisbe. More needs to done to prevent men’s deaths. This woman student wrote to her man teacher that he was to her “more beloved than all the most beloved {dilectissimorum dilectior}.” In fact, she felt at first sight of him the intercourse of love:

From the day I first saw you I began to love you.
You penetrated forcefully my heart’s inner being.

She felt “your being, your being with me {tuus esse, mecum esse}.” That’s a passionate expression of intimate union.

Women in love tend to have a sense of entitlement to love possession. The woman student instructed her man teacher to be faithful to her. She declared that he was one “whom I keep locked in the marrow of my heart {quem teneo medullis cordis inclusum}.” In concluding her letter to him, she drew upon what was probably a refrain in a medieval German folk song:

You are mine, I am yours,
of this you shall be sure.
You are locked
within my heart.
The little key is lost —
there within you must forever be.

That’s a sweet sentiment. But it’s also an aggressive assertion of love possession. It starts with the declaration “you are mine {du bist min}” and leaves no room for the other to question, for “of this you shall be sure {des solt du gewis sin}.” Men sometimes sense in love with women an ominous shadow of captivity.

Men, even men professors, tend toward romantic simplicity. Early in the twelfth century at a convent in Regensburg, Bavaria, a woman student was in love with her man teacher. He wrote to her:

It’s I, you know whom, but don’t betray your lover!
I beg you to come at dawn to the old chapel.
Knock at the door lightly, because the sacristan lives there.
What my heart now conceals, then will be revealed to you in bed.

To many men, love isn’t just a matter of words. The teacher at Regensburg explained to a woman student:

Love consists not in words, but in good deeds.
Because I feel that you love me in words and deeds,
if I live unharmed, with an equally good deed I’ll repay you.

Put more simply, one good night in bed merits another. Men’s feelings such as these shouldn’t be dismissed as merely crude lechery. One learned, twelfth-century teacher in Paris wrote to his highly educated woman student:

Those parts that your clothes conceal are like what? Scarcely can I rest my mind.
I want to caress them when they enter my soul.

While engaging in work of the mind, medieval men teachers profoundly appreciated women’s bodies and the joys of sensuality.

When a woman declares that she gives herself in love to a man, that man commonly feels entitled to have sex with her. Men as fully human beings deserve to flourish fully in all their natural capabilities. Most men sadly have no general sense of sexual entitlement. Of course, men can scarcely develop a sense of sexual entitlement when they endure a harshly unequal gender burden in seeking amorous relationships. Married men and women, however, had a legal sexual entitlement in the relatively enlightened medieval period. Medieval marital law required spouses to have sex with each other even when one didn’t feel like it. Some medieval men apparently felt similarly entitled to sex even if the woman who loved him wasn’t married to him. In particular, the man teacher at Tegernsee complained that the woman student who loved him refused to consent to having sex with him:

Since toward me you spread your branches, fittingly adorned with leaves of words, you enticed my heart. But so that I should not pluck any of your tree’s fruit to taste, you repulsed me. This is the gospel’s fig-tree, fruitless and poetically subtle, yet without cultivation. For what does it occupy earth? If faith without works is truly dead, and if the fullness of love is shown in works, you have shown yourself exceedingly contrary to your very self. … What you expressed magnificently in words, you should fulfill with loving acts.

She then again rebuffed him:

you think that after some tender words that we have spoken, you should proceed to acts. It is not so, nor will it be!

Medieval women students were strong and independent enough to say no to importuning men teachers, even those arguably entitled to sex with them. This young woman even included a bitingly ironic final line in medieval German:

May you be steadfast and joyous always.

Not all medieval women were this cruel. Some compassionately helped dying men. Other medieval women nicely refused to have sex with their boyfriends. No good reason exists for being mean to men. Good will to men is good practice, and it promotes peace on earth.

While men need to cultivate a sense of sexual entitlement, women in love should relinquish their sense of love possession. A woman should not treat a man she loves as if he were her personal property or feudal serf. This gender trouble has deep historical roots. Consider a Greek woman’s claims sometime before the early second-century BGC. About her lover she said:

The choice was made by both:
we were united; Aphrodite
is surety for our love. Pain holds me
when I remember
how he kissed me while treacherously intending
to leave me,
that inventor of inconstancy
and creator of love.

This woman acknowledges her agency and her choice in love. Yet she disparages the man she loved exercising his choice. He loved her, and then he rejected her. That happens in the earthly world. He almost surely didn’t declare himself her love possession forever.[7] Even if he did, men, like women, sometimes change their minds. Her calling him the “inventor of inconstancy” reflects her pain of being rejected. Feminist scholars would note that Helen of Troy deserves credit for being inconstant much earlier than this man was. In any case, this woman wasn’t abandoned, as if she had the right to have the man with her. Merely the man who once loved her subsequently left her.[8]

This woman refused to accept being rejected in love. She still burned with desire for the man:

Desire has seized me,
I do not deny it, having him in my thoughts.
Loving stars and you, Queen Night, who loved with me,
escort me even now to him, to whom Aphrodite
delivers me and drives me, and to the
great desire that has taken hold of me.
As guide I have the great fire
that burns in my heart.

The underlying figure here is a torchlight bridal procession.[9] The woman doesn’t respect the man’s choice of whom to marry. She insists that she will marry him. She asserts that her sexual jealousy must be the factor controlling his marriage:

I am about to go mad; for jealousy holds me,
and I am burning at being deserted.
For this very reason throw the garlands to me,
with which I shall be bedded in my loneliness.
My lord, do not exclude me and put me away;
receive me; I accept being a slave to jealousy.

This woman interprets her jealousy as creating a sexual entitlement for her. Certainly she, like any man, is entitled to sex by her very humanity. But she’s not entitled to sex with any man she chooses. Moreover, she has no right to compel him to marry her, even if she claims that he “seduced” her as a virgin. Women must check their privileged assertions of love possession.

Love possession, in contrast, isn’t a human right. Love possession rightly comes about only through the gift of oneself to another. Rather than demanding possession of men, women should lovingly seek men’s masculine gifts.

Newman points out that the German poem “You are mine…” could not have originally ended Tegernsee Love-Letters 8. Newman (2016) p. 246. In Tegernsee Love-Letters 9.40, the man teacher complains to the woman student about the “harsh epilogue {asper epilogus}” to her letter. The German poem certainly isn’t a harsh epilogue. Newman further declared: “The German lines replace an earlier epilogue deleted by the Tegernsee scribe.” Id p. 248. Some scribe apparently deleted the original epilogue. But the German song may have existed in the letter before the deleted epilogue. That deleted epilogue could have been a jarring, harshly anti-meninist declaration such as, “But remember, men who think a heart’s love implies carnal love are dogs!”

In interpreting this letter, Newman figures the man teacher as a beast. He “pounces” on the woman; he’s a “rhetorical devil.” Newman (2016) p. 250. Such vicious rhetoric supports the criminalization of men’s sexuality and mass incarceration of men.

Dear abbess, I have heard
that you are very learned
about what´s good; for love
of God, please have mercy
on me, as I know nothing
more than an ass about fucking
and just this year got married.

I´ve heard that when it comes
to fucking and other good fun
you´re a most learned nun,
so teach me how to fuck,
Madam, as I´m untrained:
my parents never explained,
and I remained quite dumb.

And if by you I´m told
about the art of screwing,
and if I learn to do it
from you in your Godly role
as abbess, each time I fuck
I´ll say a solemn Our Father,
and I´ll say it for your soul.

I´m certain, Madam, that you
can thus attain God´s kingdom:
by teaching all poor sinners
more than abstaining from food,
and by teaching all the women
who come to seek your wisdom
about how they should screw.

Galician text and English translation (by Richard Zenith) from the excellent Cantigas Medievais Galego-Portuguesas site. This poem should not be interpreted to justify women teachers raping male students. That those students are then liable to pay their rapists “child support” exacerbates the criminal harm.

[images] (1) Women harvesting penises from a penis-tree. Illumination in a 14th-century manuscript of Le Roman de la Rose by Guillaume de Lorris and Jean de Meun. On folio 160r of manuscript preserved as BnF Ms. Français 25526. Penis trees were a common representation in late-medieval Europe. Mattelaer (2010). The growth of penis-trees suggest more intensive commodification and devaluation of men’s sexuality. This illumination may have been the work of Jeanne de Montbaston, a woman was “sworn illuminator of books {illuminatrix libri jurata}.” Jeanne de Montbaston along with her husband Richard Montbaston operated a bookmaking atelier in mid-fourteenth-century Paris. Karataş (2019) (2) Man handing penis to woman. Similarly from folio 160r of BnF Ms. Français 25526.

Karataş, Melek. 2019. “Creation and collaboration in a fourteenth-century Parisian atelier: Jeanne and Richard de Montbaston and the Histoire ancienne.” The Values of French Language and Literature in the European Middle Ages. Online, Jan. 14, 2019.