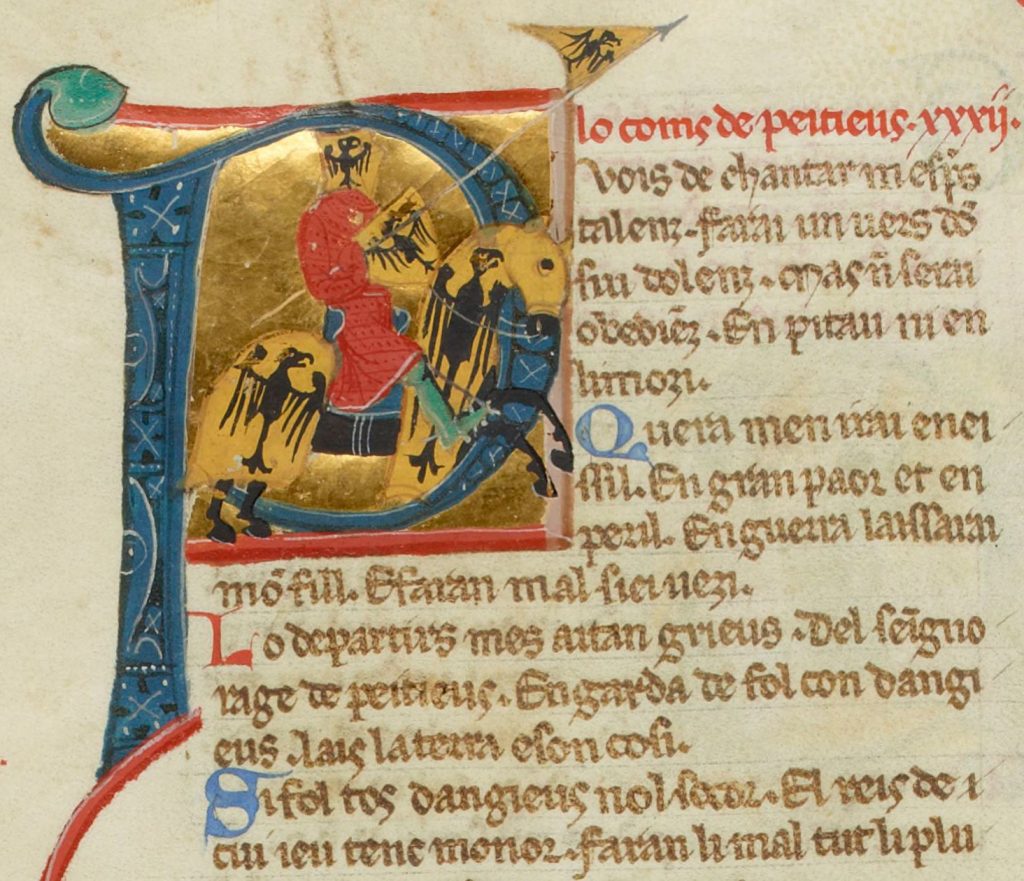 In our age of ignorance, bigotry, and superstition, many believe that trobairitz and troubadours were medieval folk singers who sang only ennobling love songs. That’s fake history, the medievalism of fantasy, an ideological fabrication in support of today’s men-oppressing cult of courtly love. Trobairitz and troubadours were elite women and men. Their songs included earthy appreciation for sexuality and lower bodily functions as well as sophisticated, critical considerations of dominant structures of gynocentric gender oppression. A unjustly marginalized song of trobairitz and troubadour, wife and husband, deserves more attention than numerous conventional songs of men-abasing courtly love.

In this greatly under-appreciated song, a troubadour singing to a trobairitz described in the third person a difficult marital situation. He recounted:

I have heard a lady who complained
about her husband, and I can tell you her grievance:
he never put it in more than half-way when she gave herself to him,
and for this she wanted her right to be upheld,
so that the lacking and the harm to her
he would come to rectify at once,
no more doing her wrong
with what he holds out.

The medieval Christian ideal of marriage was an equal conjugal partnership, not courtly love. Medieval Christian spouses had an obligation to fulfill each other’s requests for sex. That was called the marital debt. Yet women’s sexuality has long been valued more highly than men’s. Women are thus prone to acquire a sense of sexual entitlement. The wife described herself as “giving herself” to her husband, and she didn’t appreciate her husband giving himself to her. She wanted more than he gave. Like a woman claiming child support from a man that she has raped, the wife asserted her sexual right.

Not sexually ungenerous, the husband didn’t go in more than half-way out of love for his wife. The troubadour recounted:

And her husband responded to her as it pleased him,
and told her the reason he gave it to her in moderation:
he had a bigger one than any man of that place,
and he feared that she surely would die
if he didn’t hold back,
for he had one so large,
that he could kill her with it
if he had no compassion for her.

Dying in love passion is a gender-neutral poetic figure. Lucius, transformed into a donkey in Apuleius’s second-century Metamorphoses, wrongly worried about hurting a woman with his penis. Many men similarly internalize representations of their love-making organ as a weapon of violence. Such poetic simple-mindedness harms both men and women.

In response to the troubadour’s account, the trobairitz identified the husband as her husband. She asserted her evaluation of the matter:

All that you have heard him say is the boasting
of my husband, who doesn’t, I believe, have one so large.
I believe not even half of what he says he has,
such have I felt a lack and an inadequacy.
And he says that he might kill me with it,
yet of that I have no fear;
indeed, the one he has for me is too small,
and about this he has lied to me.

Men’s bodies and men’s performance are subject to the female gaze and female evaluation. Is it any wonder that men feel pressure to put meat on table?

In response to the trobairitz belittling her husband, the troubadour identified himself as her husband. He strongly criticized his wife for not appreciating his compassion for her:

Wife, what you seek is grand madness!
And I should warn you well from the start,
that I could destroy one who has no other illness,
and you would want to die in such a way?
If I hadn’t had such sense,
as to have consideration,
it would be choosing sorrow
for you, and there’s no gratitude for me.

Most husbands love their wives and seek to do what is best for their wives. Wives should show more gratitude for their husbands, as Boncompagno taught wives in twelfth-century Bologna.

The trobairitz, a strong, independent woman, instructed her husband on what he should do in bed with her. She declared:

Husband, you should cease the harm you do
and reduce the evil done to me, discerning a better way.
If you can do it so that you hear me cry out and yell,
by ruling over me in my loins and killing it,
I will give you a fighting partner
who triumphs, but doesn’t strike,
who is pleased when he is struck
and doesn’t become less daring.

Wife, since as a liar
you regard me, I’ll put it all in:
because you’re not grateful for restraint,
you will then give up your spirit!

Jesus’s passion ended with him giving up his spirit. For faithful Christians, that salvific act of love offers hope for abundant life and complete joy. The wife recognized that passion ultimately lives not in words but in action. She knowingly chided her husband:

Husband, I ask for us to abstain
from what is worth only a penny;
much boasting we have heard,
nothing more than empty words!

In other words, the wife proposed that they engage in marital sex, rather than just talk about it. Men’s sexuality is enormously important to women. This song poignantly moved from a third-personal story to a first-personal negotiation of intimacy between spouses within a Christian understanding of passion. 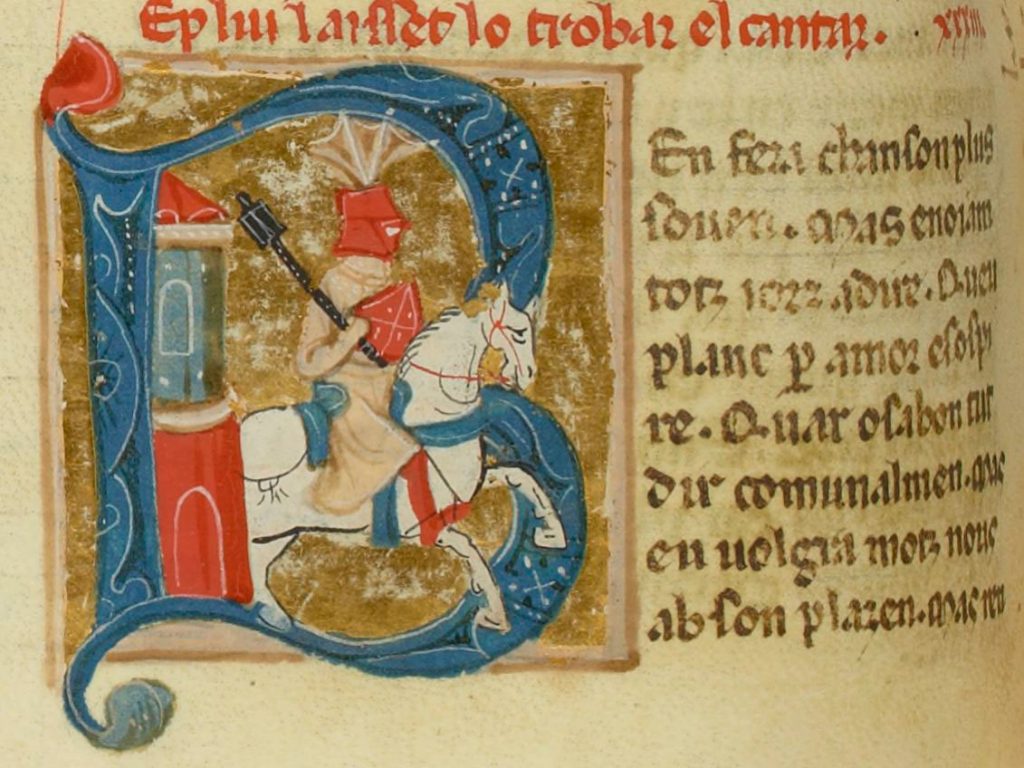 Vitally important medieval literature has been marginalized through men’s lack of meninist self-consciousness and the overwhelming force of gynocentric interests. Troubadours have been socially constructed as idealized instructors in courtly love. They in our day thus serve to instruct men in oppressive, fruitless self-abasement in loving women. Trobairitz have been falsely interpreted as proto-anti-meninists who further demonstrate the truth of dominant myths. Love separated from truth cannot stand the test of enlightenment. Study medieval literature and truly swerve now!

The above quotes are from the medieval trobairitz / troubadour song (tenso) “Una dona ai auzit que s’es clamada {I have heard a lady who complained}.” The quotes cover the whole song. This song also exists in a somewhat different version “D’una domn’ai auzit dir que s’es clamada {I have heard of a lady who complained}.” In Chansonnier C (MS BnF 856), this song is wrongly attributed to Guillem de Sant Didier (Guillem de Sant-Leidier). Scholars now regard it to have been composed at least in part by the early fourteenth-century troubadour Peire Duran. Sakari (1992), Sansone (2000), Sansone (2001).

An anonymous trobairitz apparently co-composed this song. Some scholars wrongly deny a trobairitz authority to co-write such a song. However, medieval women, like medieval men, composed a wide range of works. Some scholars also regard this tenso as “fictive.” See, e.g. Taylor (2015) p. 483. This tenso likely draws upon a classical literary tradition represented by Lucius as a donkey having a sexual affair with an elite woman in Apuleius’s Metamorphoses. However, the tenso may be real in the sense that a trobairitz and troubadour, who were wife and husband, together composed and sung this song about a matter of personal concern to them in early fourteenth-century Occitania.

Troubadours lacked the privileged position of trobairitz. Like many wives pursuing careers today, trobairitz were more likely to compose and sing for their own aspirations and personal fulfillment, not because they were forced to earn money as sexually devalued persons.

Father, into your hands a commend my spirit. Having said this, he breathed his last.

Taylor, Robert A. 2015. A Bibliographical Guide to the Study of the Troubadours and Old Occitan Literature. Kalamazoo: Medieval Institute Publications, Western Michigan University.