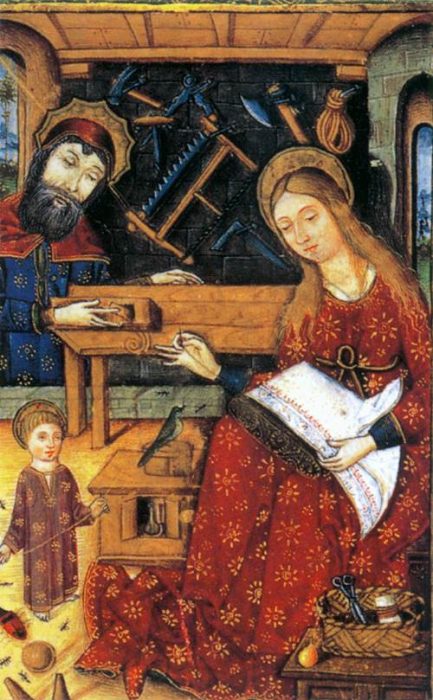 A wife having sex with her husband when she doesn’t feel like doing it is now regarded as her husband raping her. In the more enlightened Middle Ages, the situation was much different. Christian spouses had an obligation to grant each other’s requests for sex, even if one didn’t feel like doing it.[1] The Christian marital sexual obligation was know as the marital debt. But this marital sexual obligation wasn’t merely understand in contractual-commercial terms. A medieval husband’s sexual obligation to his wife included action saving her life and preserving her mental health.

In medieval Italy, a young, newly married woman was gravely ill. She lay on her back, her eyes closed, scarcely breathing, and looking like a corpse. Everyone thought that she would soon die. The young, newly married husband despaired greatly of her mortal illness. Showing manly initiative, he rose into action:

The husband was lamenting that his wife, with whom he had been sexually intimate so few times and whom he loved greatly, was being so soon snatched away from him. He therefore decided to have sex with her before she expired. After having sent away all bystanders by mentioning vaguely the performance of some secret act, he engaged in sexual intimacy with his wife.

The effects of marital sex were miraculous:

Immediately, as if her husband had injected new life into her body, she began to draw in breath, she opened her eyes, and after a little while she began to speak. With a gentle voice, she called for her husband.

As most husbands do, he responded promptly and obediently to his wife’s call. She asked for some food and drink. He got them for her. She was thus fully restored to good health. The course of the wife’s illness leaves no room for doubt: without the husband’s sexual service, the wife would have died. That’s a stressful burden for husbands to hold in the marital bed.

A husband’s obligation to have sex with his wife was also regarded as vitally important to his wife’s mental health. In medieval Tuscany, a wife was suffering from frenzy and delirium. To get her to a folk-healer for a prognosis and treatment, the husband and his helpers had to transport her across the Arno River:

In order to cross the Arno River, they put the woman on the back of the strongest man. Immediately she began wriggling her buttocks, simulating sexual intercourse, and crying out in a loud voice, “I,” she said, frequently repeating her words, “want to be fucked!” Thus she voiced the cause of her illness.

Everyone laughed at the husband and attributed his wife’s illness to him:

The one who was carrying the woman poured out such a fit of laughter that he fell into the water with her. All the rest burst out laughing with knowing the cure for this insanity. They asserted that, not the work of a folk-healer, but sexual intercourse would restore her to sanity. And they turned to her husband, “You,” they said, “will be the best doctor for your wife.”

All then returned home. As soon as the husband had been sexually intimate with his wife, she perfectly recovered her mind.[4] Husbands were thus held responsible for wives’ mental health. That’s a heavy burden of sexual responsibility for husbands.

Medieval wives never forgave husbands who failed to fulfill their marital sexual responsibilities. Consider a medieval husband asking his dying wife for forgiveness for any injury he might have done her. He reminded her that he had been a good husband. He explained that he had never failed to pay his marital sexual debt to her, with one exception:

excepting that time when she was not in good health, because he didn’t want to fatigue her with sexual intercourse.

“This,” she said, “by my faith, I can never forgive you. I was never so sick or infirm that I wasn’t able to be flat on my back.”

Husbands must learn to infer what their wives are actually saying. To any but the dullest husband, this wife’s message to her husband is clear: get to your marital sexual work, now!

Throughout history, young, beautiful women have sexually harassed men. But within medieval marriage, sexual harassment wasn’t a concern. Spouses were expected to have sex whenever one of them desired. Husbands had the longest and hardest part of this marital responsibility. For those drooping in their duty, beatings and other forms of punishment stimulated only a small share of men with peculiar predilections. A medieval proverb offered women more generally useful wisdom:

She who wants her tail soothed must stroke her husband’s head.

Today, men are incarcerated for not being able to make monthly payments to woman with whom they had sex. Being incarcerated greatly harms a father’s ability to provide emotional and material support to his children. Loving men, or least treating them humanely, is a much better way.

[1] If both spouses never requested sex, Christians could live in a sexless marriage.

[2] Poggio, Facetiae 112, “Of a husband who was sexually intimate with his sick wife, and thus restored her to health {De viro qui uxorem aegrotam cognovit, et postea convaluit},” Latin text from Poggoi (1879) vol. 1, p. 180. Here and subsequent quotes include my English translation, drawing upon that of id., but tracking the Latin more closely. The subsequent quote is from id.

It is said that the virgin, if she be kept too long from copulation, will suffer from a condition that the physicians call “constriction of the womb,” which leads to delirium and melancholia in the brain, to the extent that she may be thought mad, though she is not; suffice that she be fucked for the ill to vanish immediately.

[5] Poggio, Facetiae 42, “A husband who asked his wife for forgiveness while she was sick {Vir qui mulieri dum aegrota esset veniam postulavit},” Poggoi (1879) vol. 1, pp. 74-5. The subsequent quote is from id.

[image] A holy family in medieval Spain. Illumination from a Book of Hours. Made in Spain in the 1460s. On folio 48v in Ms. Add. 18193, British Library, London. Thanks to the Web Gallery of Art.