In the more liberal and less repressive circumstances of medieval Europe, men understood that they could serve women with their bodies as well as their minds. Medieval men had poignant examples of both types of woman-serving. Early in twelfth-century Paris, Adam of Saint Victor composed rhythmic Latin hymns to honor Mary, the mother of Jesus. About a century later, a tumbler engaged in vigorous physical activity to please Mary. Men deserve freedom to engage in one, both, or neither of these forms of woman-serving while at the same time having their own intrinsic human dignity and worth respected and appreciated.

Deeply devoted to Mary, Adam of Saint Victor directed his extraordinary literary skills to honoring her. According to a story preserved in a text written early in the thirteenth century, Mary herself acknowledged Adam’s intellectual effort:

The venerable Master Adam, canon of Saint Victor’s in Paris, was composing the sequence Salve mater Salvatoris. When he had just written another strophe of rhythmic poetry, namely:

the glorious Virgin appeared to him. As if repaying him for the homage he had paid to her, she beseechingly bowed her head in the highest humility to him while he was thinking.

These events took place in the crypt of the Abbey of Saint Victor. To commemorate these events, a statue of the Virgin Mary, with her head bowed, was erected there. Adam of Saint Victor is an impressive role model for men serving women with verbal sophistication.

While not all men have brilliant verbal skills, every man has the wonderful endowment of a distinctively masculine body. The Old French story Le Tumbeor Nostre Dame {The Tumbler of Notre Dame}, probably from early in the thirteenth century, tells of a monk alone in the crypt of the Abbey of Clairvaux.[2] He lacked any of the learning of Adam of Saint Victor. However, this monk was “graceful, noble, and handsome {beaus et gens et bien formez}.” Moreover, he had a strong, firm body like a “young male goat {cavreçon}.” He sought to delight Mary with his near-naked body in action:

He removed his cloak and undressed
and put before the altar his removed clothes.
…
And there he stood with his body undressed;
he is well outfitted and equipped.
…
Then he begins to turn flips for her,
low and small and high and great,
first frontwards, then backwards.
Then he gets on his knees
…
Then he jumps and leaps and celebrates.
He does the vault of Metz over his head.
…
Then he does for her the French vault
and then the Champagne vault
and then the vault of Spain
and the vaults one does in Brittany
and the vault of Lorraine.
He cares little for his own exertions.
Afterwards he does the Roman vault,
and puts his hand before his face
and dances quite graciously
…
Then he falls with his feet in the air
and comes and goes on his two hands,
so that no more of him touches the ground,
and he dances with his feet and weeps with his eyes.

The man performed long and hard until he was exhausted and covered in sweat. Then the statue of Mary came to life. Holding a white cloth, Mary bent down to her tumbler-monk:

She fans her minstrel with it,
very gently before the altar.
The noble, merciful lady,
his neck, his body, and his face,
fans to refresh him.
She interposes herself well to help him;
the lady well does it unrestrainedly.

She appreciated his bodily service, and she in turn served him bodily and boldly. That’s the mutuality central to the medieval understanding of marital love. Men today are socially constructed as criminals or consumers. Intimate mutuality between women and men depends on men understanding that they are fully human beings who have physical capabilities that women want. Men can physically serve women well according to the traditional understanding of chivalry. 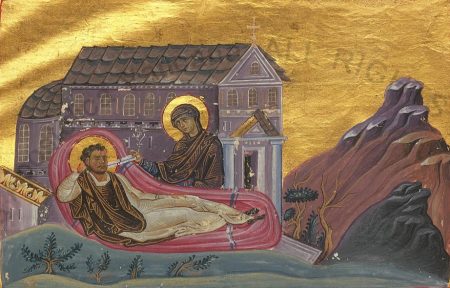 Adam of Saint Victor and the tumbler receiving supernatural appreciation for their woman-serving differs significantly from common stories of apparitions, divine interventions, and statues coming to life. Consider, for example, the story of the Virgin Mary feeding Romanos the Melodist. On a sixth-century Christmas Eve at the Marian shrine in Blachernae, just outside the city walls of Constantinople, the Virgin Mary appeared to a hoarse-voiced young Syrian man. She held aloft a scroll containing writing and told him to swallow it. The man followed her command. Then he mounted the ambo of the church and sang the hymn “The Virgin today gives birth.” That man subsequently became known as the great Byzantine hymnist Romanos the Melodist.[4] In this story, the Virgin Mary created Romanos’s talent. She didn’t respond in appreciation for his performance. Adam of Saint Victor and the tumbler, in contrast, exemplify men in distinctive ways taking up their burden of performance and receiving extraordinary female gratitude for their efforts. Compared to the story of Romanos the Melodist, the stories of Adam of Saint Victor and the tumbler are more important examples of men’s actions and the female gratitude that men deserve.[5]

Thomas of Cantimpré, who lived from 1201 to 1272, was a highly learned Dominican cleric, professor, and encyclopedist. Between 1237 and 1240, he lived at the Dominican studium of St. James in Paris. He frequently visited the Abbey of Saint Victor. Fassler (1984) p. 233. The story of the Virgin bowing to Adam of Saint Victor was thus almost surely known by 1240. On the later history of erecting a sculpture to memorialize the story, Gautier (1858) vol. 2, p. 200.

Cleric-scholars mourned their lack of bodily action. Yet they weren’t foolish enough to assume that they could do and have it all.

[2] Ziolkowski (2018) is a monumental work covering this story, its reception to the present, the challenges today of appreciating medieval humanism and medieval enlightenment, and the still-unfulfilled promise of a medieval renaissance. Le Tumbeor Nostre Dame was written no latter than 1268, probably in Picardy at the northern tip of France. Some scholars speculate that Le Tumbeor Nostre Dame was written about 1200, while a detailed analysis suggests that it was written in the third decade of the thirteenth century. Id. vol. 1, ch. 1, especially notes to the Section “Picardy.” Le Tumbeor Nostre Dame thus may have been written about the time that Thomas of Cantimpré heard the story about the Virgin Mary bowing to Adam of Saint Victor.

Adam de la Halle’s late-thirteenth-century The Play of Robin and Marion {Le Jeu de Robin et Marion / Li gieus de Robin et de Marion} includes a song section (vv. 183-211) in which Robin performs a variety of dances at Marion’s request. Like the tumbler-monk, Robin displayed physical virtuosity to a beloved woman. In contrast, Virginia Hamilton Adair’s poem “The Chapel at Mountain State Mental Hospital,” first published in 1998, humorously recasts the tumbler-monk as “Jean, the cartwheel queen of Mountain State.” While wearing a dress and no underwear, Jean performs a cartwheel for a congregation. For text and discussion, Ziolkowski (2022) pp. 328-31. Adair’s poem is less relevant to ordinary, intimate relations between women and men.

Dance styles seemed to have been associated with particular medieval cities. The parish clerk Absolon, ostentatious cultured, danced according to the school of Oxford:

In twenty ways he could trip and dance
following the school of Oxford then,
and with his legs kick to and fro

{ In twenty manere koude he trippe and daunce
After the scole of Oxenforde tho,
And with his legges casten to and fro }

[5] To understand the contemporary importance of this literary history, consider a recent performance of George Yancy, a professor of philosophy at Emory University. He put forth in the New York Times a lengthy, tedious opinion piece entitled “#IAmSexist.” His performance showed no understanding of the reality of violence, or of gender injustice generally. His attempt at woman-serving was so bad that a woman reader responded, “I think you’re making fun of me.” She, probably like most readers, couldn’t bear to endure Yancy’s performance to its end.

[images] (1) Sculpture (detail) of the Virgin Mary in the Monasterio de San Jerónimo, Granada, Spain. Source image thanks to Jebulon via Wikimedia Commons. (2) The Virgin Mary giving Romanos the Melodist a scroll to eat. Illumination from MS Vatican gr.1613. f. 78. The author of this painting has been dead for more than 900 years. The Vatican Library preserves this manuscript presumably for the common good. However, it “reserves all rights” to their image of this Christian cultural treasure. That action seems to me to be lacking in Christian generosity. Moreover, according to Wikimedia Commons’s expert and influential interpretation of U.S. copyright law, the Vatican doesn’t hold the right to prevent copying of this image and derivative works in the U.S. Here’s a version on Wikimedia Commons. I also judge my use of the image above to be consistent with fair-use provisions of U.S. copyright law.

Arentzen, Thomas. 2017. The Virgin in Song: Mary and the Poetry of Romanos the Melodist. Philadelphia: University of Pennsylvania Press.