Ancient Greek epigrams typically have a speaking object directly addressing the viewer/reader.  For example, an epigram engraved on a memorial stone at Thermopylae commemorated a Spartan army that fought there to the last man against an invading Persian army.  The epigram declares:

Stranger, go tell the Spartans
That we lie here
True, even to the death
To our Spartan way of life.

The literary conceit is to charge someone unaware of the battle with the momentous task of conveying the news, while the existence of the memorial itself testifies to both the news’ importance and reception.

By the Hellenistic period, epigram had become a highly refined literary form.  Epigrams never to be engraved in stone were written to circulate in books among the literary elite.  Epigrams such as those about Myron’s Cow and Medea intricately interrelated visual and verbal effects.[1]  Beneath an often playful surface, epigrams were allusive, self-reflective, conscious of epigrammatic predecessors, and communicatively complex.  Consider, for example, this epigrammatic representation of cleverly interpreting a non-verbal epigram:

Let me see whose death this stele reports.  But I see
no writing engraved anywhere on the stone,
just nine dice, tossed, of which the first four
bear witness to the throw called Alexander,
the next four the ephebe throw, the bloom of youthful maturity,
and this one shows the lowest throw, the Chian.
Do they announce: “A man who proudly ruled with the sceptre
and was in the bloom of youth came to naught”?
No, that’s not it, but I think that now I shoot my arrow
straight at the target, like a Cretan bowman.
The dead man was a Chian, he had acquired the name
of Alexander, and he died in ephebic youth.
How well someone has said with voiceless dice that the young man
died through recklessness, his life stacked and lost. [2]

As this epigram explains, the straight-forward interpretation is not it.  The details tell and ring poetically.

An obscure book curse appears to be a highly literary Hellenistic epigram.  At the end of a relatively unimportant third-century papyrus roll appears the text:

I am the coronis, guardian of letters.
The reed pen wrote me, the right hand and knee.
If you should lend me to someone, take another in exchange.
If you should erase me, I will slander you to Euripides.
Keep off! [3]

Medieval and early modern book curses typically are formulaic and not highly literary.[4]  With a speaking object engaged in direct address, this Hellenistic-era book curse belongs to the more creative genre of epigram.  The existing literature on Hellenistic epigram seems to have overlooked it.  Yet it has considerable literary merit.

This Hellenstic epigram includes subtle visual poetry.  The epigram is obviously multi-voiced.  The coronis, a textual symbol that marks the separation or end of major sections in ancient Greek papyri, speaks “I am the coronis.”  But the book roll is the reference in the line, “If you should lend me to someone, take another in exchange.”  The best literary division of the voices is to have the coronis as a separating voice speaking the first and last lines.[5]  That’s visual poetry that parallels the coronis’ visual work of separating.  That work is expressed verbally, in the context of poetic dynamism, as guarding and “keep off.” 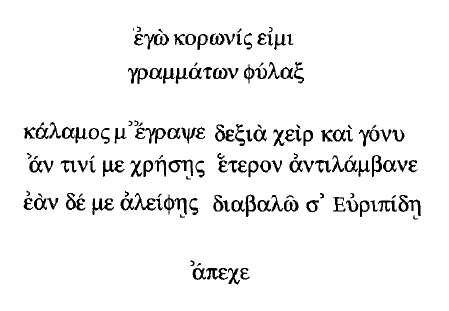 The reference to Euripides has considerable literary weight.  The book roll contains a copy of books three and four of the Iliad.  Homer was the most celebrated poet in the Hellenistic world.  Euripides in the Hellenistic era was popularly known through solo actors, probably including celebrity pantomimes, performing dramatic highlights from his tragic plays.[6]  To the literary elite, that popularization of Euripides was probably equated to destroying Euripides’ literary value.  Threatening to “slander you to Euripides” for erasing Homer’s Iliad might well be a literary allusion and response to the post-classical shift in the popular marketplace for poetry.[7]

The epigram has other noteworthy literary features.  A book owner might lend a valued book to a friend as a special favor.  The phrase “take another in exchange” places lending a book in a context like that, common in the ancient world, of exchanging political hostages to secure an agreement among hostile powers.  “The reed pen wrote me, the right hand and knee” figures the scribe through metonymy expanding from the reed pen to the scribe’s right hand and knee to the scribe’s whole person.  That representation suggests a dedicated, professional scribe.

The person who inscribed the epigram and the copy of the Iliad wasn’t doing elite literary work.  The catalog entry for the manuscript describes the script as “rough, ugly uncial.”  Moreover, within the text,“mistakes in orthography and copying are common.”[8]  Just above the epigram, which is written on a separate sheet at the end of the roll, the writer apparently wrote three coronides, which increase in figural complexity from left to right.[9] Moreover, this literary text is written on the back (verso) of a bureaucratic papyrus — a tax-assessment document.  Compared to parchment, which was also in use in the third century, papyrus is relatively cheap.  This epigram has been preserved in a low-value copy.

This epigram almost surely originated in an earlier, elite literary parchment.  The epigram refers to erasing the text.  Relatively few rewritten papyrus rolls have been found.  Erasing the back side of a papyrus roll that contains on the front side a bureaucrat text is completely improbable.  A reference to erasing the text would make sense within an expensive, original-use parchment roll.  The epigram’s high literary sophistication points to an elite literary audience.  A luxurious copy of the Iliad for a literary patron is probably the original context for this epigram.

Update: more general information on marking the end of books in the ancient world.  Here’s another coronis epigram:

I, the coronis, announcing the final lap, the most trustworthy guardian of the enclosure of written sheets, proclaim that Meleager has brought his labour to an end, having gathered all the works from all lyric poets into one collection and having wrapped them into this roll. And that from flowers he has twined together one poetic wreath worthy of remembrance from Diolces. And, curled in coils like the back of a snake, I am sitting here enthroned beside the conclusion of his learned work.

[1] On Myron’s Cow, see Squire (2010).  Asterius of Amasea, a late-fourth-century Christian bishop, provides an insightful example and perspective on ecphrasis.

[3]  From Papyrus 136, held in The British Library.  The text in Papyrus 136 appears to have a rectilinear arrangement of eight lines with the last word on an additional line. See Drogin (1983) p. 56, Plate 17 (image of papyrus sheet). Trans. Haines-Eitzen (2000) pp. 109-10, which also provides the Greek.  The arrangement of the Greek text above is my interpretation of the sense of the original text.  See subsequent discussion above. Drogin (1983) pp. 55, 57 provides alternative translations.

[7] Book 3 of the Iliad pits Paris and Menelaus in man-to-man combat.  Aristotle’s Poetics associates tragedy and epic, describes tragedy as superior to epic, and names Euripides as the greatest of tragic poets.  The above epigram may also be alluding to these literary-critical references.

[8] To find the catalog entry, search the British Library’s Catalog of Archives and Manuscripts using the terms “papyrus 136 Iliad tax” (without quotes).