The shift from paper to electronic media continues a long-term decline in the cost of media for writing.  Comments that a Byzantine bureaucrat Joannes Lydus made in the Byzantine capital of Constantinople about 552 GC testify to this long-term trend.  Joannes Lydus had retired from 40 years of bureaucratic service.  He was disgruntled with changes that begin about 531 GC.  Lydus complained:

members of the {Byzantine imperial bureaucracy} stoop to demand even parchment of those who transact business {with the imperial government}, while previously it was customary not only not to attempt such shabby things, but, besides, to consume even the clearest parchment of all for the transactions, with the scribes resplendent proportionally to their parchments.  Both of these things, however, vanished afterwards {after 531}, and from the lack of money they exact {as a transaction fee} an extremely modest and disgraceful copper {instead of gold coin} and issue grass instead of parchment, covered with inferior writing and redolent of poverty.[1] 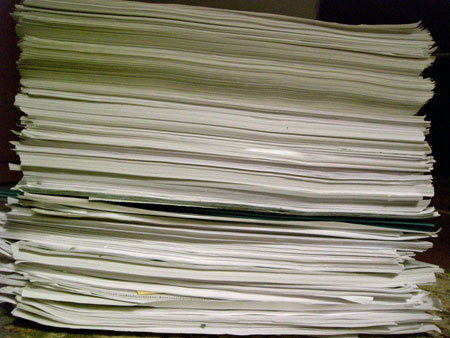 [1] Lydus, Joannes, trans. from Greek by Anastasius C. Bandy (1983) On powers or The magistracies of the Roman state (Memoirs of the American Philosophical Society, 149) 3.14 (p.  155). The ending portion “issue … poverty.” is from the translation in Kelly, Christopher (2004), Ruling the Later Roman Empire (Belknap Press of Harvard University) p. 81.  In addition, the first two instances of “parchment” in the translation above are rendered as “paper” in Bandy’s translation.  I have changed them to parchment for consistency with the root word in the original Greek text.

[2] Cassiodorus, a senior official in the early sixth-century Ostrogothic government that ruled Italy, declared in 534 GC in a letter to a local tax collector:

Rightly did Antiquity ordain that a large store of paper should be laid in by our Bureaux (Scrinia), that litigants might receive the decision of the Judge clearly written, without delay, and without avaricious and impudent charges for the paper which bore it. … Therefore for this thirteenth Indiction pay so many solidi from the land-tax of the Tuscan Province to our Bureau, that it may be able to keep in perpetuity a faithful record of all its transactions.