In twelfth-century Europe, Christians were intensely devoted to Mary, the mother of Jesus. Within “a prevailing climate of fevered Marianism,” the Christ of Christianity, like so many other men, became merely a nominal leading figure:

the cult of the Virgin had assumed such proportions and evoked so much fervour that the figure of the Mother Of Christ began to eclipse that of her Son {Jesus} and of all the apostles and saints. It might seem almost true to say that, in the later Middle Ages, the central object of the popular cult was in actual fact the Virgin Mary, exalted to the rank of Queen of Heaven, crowned with the twelve stars, and invested with all those human and tender attributes in which the early Church had first clothed the figure of the Saviour. [1] 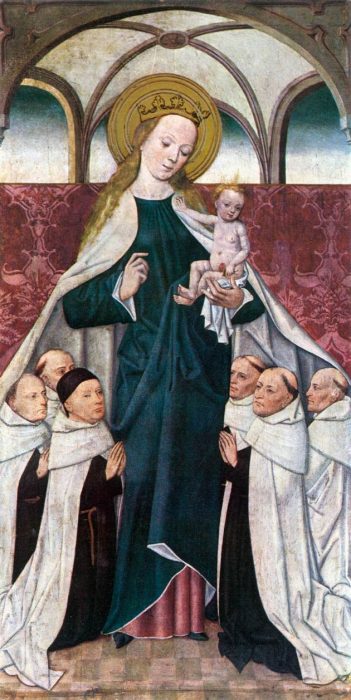 “Hail, O mother of our Savior” brings together many figures of Mary, including some that directly relate to men’s sexuality. The sequence begins in praise of Mary as an appropriate medium for bringing a savior to humanity:

The vessel in which Mary carried Christ to the world was literally her womb. Mary was a very special woman. But what about ordinary men? The next stanza separates Mary from disparaged masculine sexuality:

Hail, holy parent of the Word,
blossom from thorn, lacking thorn,
thorn tree’s glory and its flower:
we are the thorn tree, we suffer
bloodstains from our sins’ thorn-pricking;
you, however, know no thorn.

The virgin Mary knowing no thorn identifies a thorn with a man’s penis.[3] The bloody sins of thorn-pricking are men’s sexual sins, especially in relation to virgin women. These sins are also women’s, since men get blamed for women’s sexual sins. Mary, like all women, had an ancestral thorn tree of fathers. But Mary, unlike any other mother before artificial insemination, thornlessly blossomed into pregnancy. Thorns typically evoke pain, yet ordinary women commonly delight in being subject to thorn-pricking. As this Latin Christian sequence and many other poetic texts make clear, men’s penises have an image problem.

The penis’s image problem is associated with devaluing men’s work. Historically, men have in net transferred a significant share of their laboriously earned resources to women. Moreover, men historically have done heavy work in agricultural fields — work such as plowing. “Hail, O mother of our Savior” devalues that men’s work:

You are a humble valley,
earth unsuited to the plow,
yet earth that brought forth fruit.
Blossom of the field,
singular lily of the valley,
Christ from you came forth.

Men typically must labor to have an agricultural field produce fruit. Moreover, plowing is a common figure for men’s sexual work. Here, the virgin Mary produces the greatest fruit, Christ, without men’s agricultural or sexual work. Mary, as the sequence states explicitly, was a “singular lily of the valley.” In our age of ignorance and bigotry, many single women believe that they are most fruitful without men. Thought leaders have gone as far as to suggest that men aren’t necessary. Not surprisingly, the share of sexless marriages has risen as the share of agriculture in the economy has fallen.

Mary provides a model of women’s privilege that has extended far beyond her specific Christian life. Within the public life of today’s decaying democracies, Mary is Everywoman:

Singular is the palm you bear,
none on earth can be your equal,
none in heaven’s court above;
you, the praise of humankind,
are privileged with virtues
more than all the rest.

As the sun outshines the moon,
and the moon in turn the stars,
so is Mary worthier
than all creatures everywhere.
Light that knows no eclipse
is the virgin’s chastity.
Her immortal caring
is a never-failing ardor.

Education and media institutions have for decades sought to promote women’s self-esteem. Forty is the new thirty. Chastity is the burning ardor of the single woman who sleeps with man after man because she cares for them, or doesn’t. In any case, it’s the men’s fault. She still regards herself as a virgin. You must address her as she says. Everywoman is now like a non-Christian Virgin Mary.

O Mary, star of the sea,
singular in dignity,
above all ranks
are you ranked in heaven above.

Set at the highest pole,
commend us to your son,
so neither the terrors nor deceits
of our enemies cause us to stumble.

Jesus, Word of the highest Father,
watch over your mother’s servants,
absolve sinners, save them freely,
and shape us to the glory
of your splendor.

These men are mother’s servants. However, they at least recognize a true father and pray to Jesus, a fully masculine man.[6] Medieval Latin literature didn’t suppress the sighs of oppressed men. It stimulated men’s hearts in a heartless world of violence against men. It prevented gynocentrism from becoming wholly soulless.

Girls and boys in schools today are taught that “the future is female.” Modern science supports that dogma with empirical evidence of the women-are-wonderful effect and studies establishing that women are superior to men in social communication. Yet women dominated social communication in the past, women have long been regarded as wonderful, and human societies have long been resolutely gynocentric. While “the future is female” is merely current unquestionable dogma, that the past and present have been female are widely suppressed facts. To find enlightenment today, students must study medieval Latin songs such as “Hail, O mother of our Savior.”

Veneration of the Mother of God belonged among the paramount manifestations of Christian practice. To go further, it reigned supreme in that same class.

[2] Adam of Saint Victor {Adamus Sancti Victoris}, “Hail, O mother of our Savior {Salve, mater Salvatoris},” st. 1, Latin text from Grosfillier (2008), my English translation drawing on that of Mousseau (2013) and Walsh (2012). The Latin text is freely available online in Blume & Bannister (1915) pp. 383-6 (no. 245). Mousseau reports no different between that Latin text and the Latin text of Grosfillier (2008). Mousseau (2008) pp. vii-i, 221-3. Mousseau’s English translation adheres to the literal meaning of the Latin words. Id. p. vii. Walsh’s English translation (with the help of Christopher Husch) faithfully imitates the Latin rhythmic meter, but not the Latin rhyme. Walsh (2012) pp. xxi-ii. My approach has favored accuracy over meter, while attempting to preserve more of the song of the sequence in following Walsh. Subsequent quotes above are from this sequence and have the same sources.

The title (first line) of the sequence, “Salve, mater salvatoris,” is literally translated as “Hail, mother of the Savior.” The sequence is commonly known according to a looser translation of that line, “Hail, O mother of our Savior.” I’ve used the latter form in referring to the sequence.

The liturgical hymn “Hail, O mother of our Savior” is more precisely called a sequence. A sequence is music traditionally song before the Gospel in the Christian Mass. For more information on sequences as liturgical music, see the Catholic Encyclopedia and Wikipedia. Those who refer to a sequence as a hymn risk incurring the ire of learned specialists in medieval music. Within the liturgical calendar, “Hail, O mother of our Savior” occurs in the Mass of the Nativity of the Virgin Mary on September 8.

[3] The thorn as a figure for the penis is attested elsewhere in medieval Latin literature. For example:

The thorny bushes bloom
with dancing flowers
that signify Venus, because the thorn pricks
and the flower offers blandishments.

[4] Wrangham evocatively translated “terra non arabilis” as “soil that never felt the plow.” Wrangham (1881) v. 2, p. 221. Soil that has been plowed has been vitally important for the perpetuation and development of human civilization.

[6] Avoiding totalitarian gynocentrism, Adam of Saint Victor’s sequences centered on Mary commonly end with a plea to Jesus or God the Father. See “O Mary, star of the sea {O Maria, stella maris},” “Let us give solemn thanks of this day {Gratulemur in hac die},” “Hail, singular virgin, mother of our salvation {Ave, virgo singularis / mater nostri salutaris},” and “Hail, singular virgin, / portal of life, star of the sea {Ave, virgo singularis, / porta vitae, stella maris}.” Cf. “Let us adorn the temple of the heart {Templum cordis adornemus}” (for the feast of the purification of the Blessed Virgin Mary, Feb. 2). All these sequences are in Mousseau (2013).

Adam even went as far as to balance single motherhood with single fatherhood:

[image] The Virgin of Mercy (Mary the mother of Jesus dominating little men). Painting (tempera on oak panel), made about 1480. Preserved in the Museum of Fine Arts (Budapest, Hungary). Image via Web Gallery of Art and Wikimedia Commons.

Ziolkowski, Jan M. 2018. The Juggler of Notre Dame and the Medievalizing of Modernity. Volume 1: The Middle Ages. Worldwide: OpenBook Publishers.