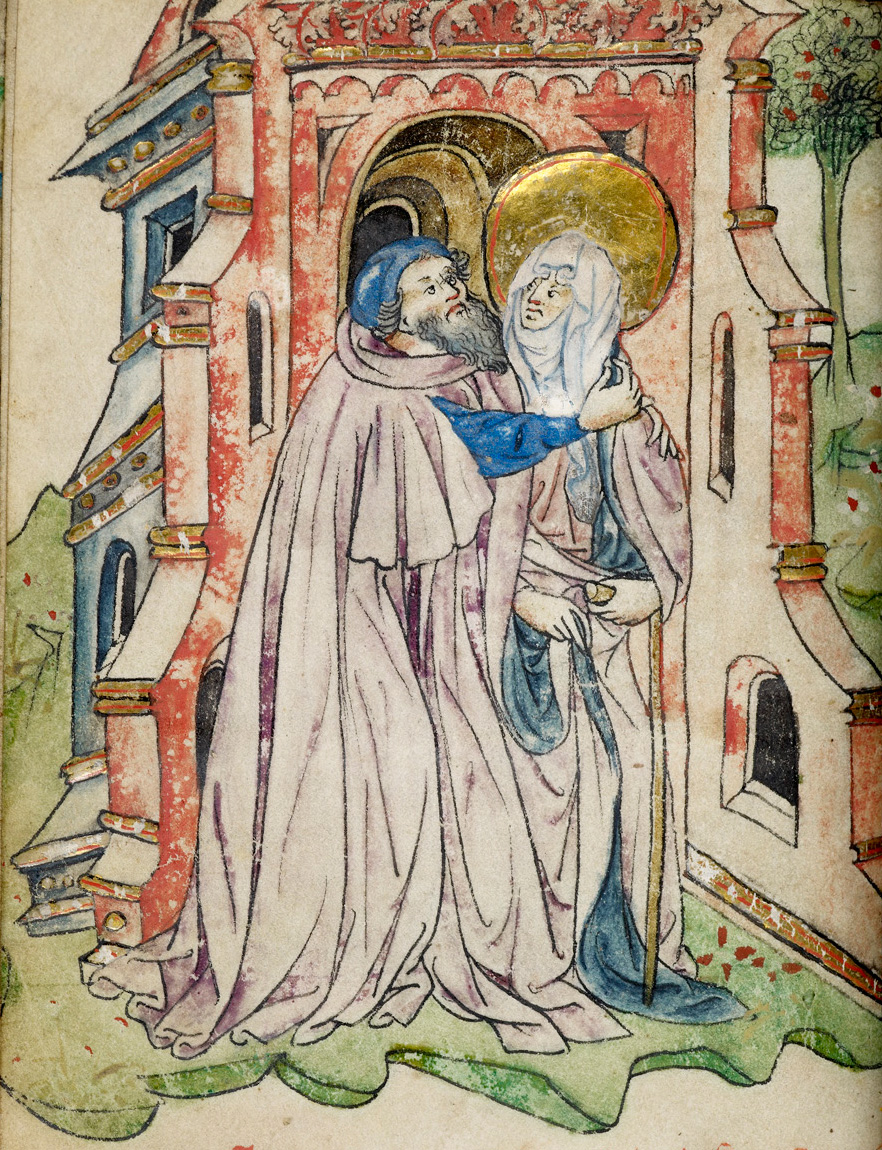 On the British Isles in the seventh century, a husband sought to divorce his wife. Whether this husband suffered abuse from his wife, as Matheolus did in twelfth-century France, isn’t know. What’s clear is that this husband didn’t find God in love with his wife. He thus looked elsewhere:

I want to turn to my God;
I do not want my wife.
Lord, I ask this of you;
I long to serve you alone.
Wife, depart from me!

Available data from the late-nineteenth century through to the present indicates that wives seek divorce about 2.5 times as frequently as husband do.[2] This medieval case of a husband seeking divorce is probably rather unusual.

God has joined us fairly,
but my mind shall have joy.
Lord, what am I asking of you?
I myself long to serve you.
Wife, depart from me!

Family law helps to explain why wives seek divorce about 2.5 times as frequently as husbands do. Children are typically a highly valued good in a marriage. Anti-men sex discrimination in child custody and child support decisions is today enormous. This vitally significant sexism attracts remarkably little public concern. That’s a result of deeply entrenched gynocentrism. Despite recent fabrications of family-law history, wives in practice have probably always predominantly received custody of children upon divorce or separation. Medieval tales tell of fathers made into only wallets. Husbands’ higher probably of losing custody of their children makes them more reluctant than wives to seek marital separation or divorce.

Fathers have typically loved their children dearly. Both Jewish and Christian scripture describes God as a father. That gender figure isn’t meant to be understood literally. It’s meant to communicate God’s loving care for his children. The gender figure of God the father makes no sense without ancient, popular understanding of a father’s love for his children. A tenth-century poem sings of a father’s joy and the laughter that he brings to his children:

Turning somersaults he clowns on the branches;
vivid from behind he glitters like gold-leaf.
His happy antics make all viewers laugh.

He hangs on the nest above his young nestlings
showing himself off to their admiring faces;
he can outsing all his chick’s little voices.

Whether bird or man, most fathers delight in life with their children. That, along with discrimination against husbands in child custody decisions, reduces husbands’ relative incentive to seek divorce.

Medieval marriage was a more attractive institution than is marriage today in high-income westernized countries. Under medieval canon law, a marriage could be legally contracted only with the freely given assent of both persons. Most medieval persons in their poverty didn’t envision marriage merely as a bucket-list checkbox to experience an extravagant special-day wedding ceremony. The medieval ideal of marriage was a conjugal partnership. Drawing upon the different skills of husbands and wives and benefiting from sharing of material resources, economic partnership was an important aspect of the medieval marital partnership. Moreover, under canon law, medieval spouses were indebted to have sex with each other, even if one didn’t feel like it. Hence medieval spouses were much less likely to find themselves experiencing sexless marriage.

What a calamity! Will you leave me?
But you shouldn’t say these words to me!
I want you to stay —
in the middle of the night I’ll need you
as my gentle husband.

Day and night I’ve been in tears
because of my dear husband:
God will defraud me,
so that he won’t lie at my side
as my gentle husband.

Few spouses today hold such beliefs. When a husband today finds that his wife is divorcing him, to whom can he turn for hope? Perhaps he might plead to God that his wife doesn’t accuse him of domestic violence as a tactic to extract higher alimony and child support payments.

I’ll put myself into a hidden place
and fling myself into the deep sea.
This will wipe out my name and me.
May God call you to account for this,
as my gentle husband!

I’m raising my head in return to God.
He will not break my heart,
that man who slanders me that God
will defraud me of my husband,
my gentle husband!

[2] For U.S. data on percent of divorce filings in which the woman was the plaintiff, for various samples from 1867 to 1995,  Brinig & Allen (2000) Table 1, p. 128. Brinig & Allen collected 46,547 divorce certificates from 1995 for Connecticut, Virginia, Oregon, and Montana. While failing to report summary statistics, id. reports for “correct estimations” 66.43. That figures appears to be the percentage of women plaintiffs. It implies that wives filed for divorce twice as frequently as husbands did.

Dankowski et al. (2017) is by far the highest quality study of divorce. It reports:

We examined all 243 divorce cases filed in Middlesex County, Massachusetts in May 2011. Excluding a single case involving a same-sex couple, 72.3 percent of the cases were filed by women. I.e., a woman was more than 2.5 times more likely to file a divorce lawsuit as a man. This is in a jurisdiction where the woman can expect to win sole custody and, for a given level of defendant income, roughly twice the level of child support profit as in the average U.S. state.

Rosenfeld (2017) p. 3. Goode’s (1956) data indicates that 264 divorces were initiated by the wife, while 105 where initiated by the husband. Those figures indicate that wives initiated divorce 2.5 times as frequently as husbands did. Rosenfeld got the figure “about two thirds” by counting mutually initiated divorces as half-initiated by wives before calculating the percentage of wife-initiated divorces. Id. p. 3, n. 1. That’s not a good statistic. Id.’s survey, “How Couples Meet and Stay Together” recorded among married couples getting divorced, 56 wives wanted the breakup more, compared to 18 husbands wanting the breakup more. Id. p. 29, Table 1, Source text. That gives a ratio of 3.1 for the divorce preference of wives relative to husbands.

The fact that wives have been more likely to want divorce implies that wives were less satisfied with their marriages than their husbands, at least among couples who divorced.

Id. p. 3. The fact that wives upon divorce typically acquire a key marital good (the couple’s children) and large financial payments from the husband obviously affects relative divorce incentives. The flood of divorces in the Netherlands preceding the reduction in alimony duration from 12 to 5 years underscores the importance of financial incentives for divorce. Rosenfeld seems obtuse to incentives in context:

The simplest version of the power theory of relationships gives the initiative to the partner with more power or status. Therefore: Hypothesis 4: Individuals with more power, more status, or more income are more likely to want to break up.

Id. p. 9. That’s a nonsensical hypothesis. Relative costs and benefits of a break-up, not absolute levels of status and income, drive divorce incentives. Under the inequality-promoting structures of family law, persons have a strong incentive not to marry a partner who earns much less because of the financial risk of large income transfer upon divorce.

Family scholars fit their thinking to gynocentric ideology in a way consistent with the development of Soviet science:

Sassler and Miller (2011) found that among young heterosexual couples, men had the privilege of asking their partner to marry, meaning men controlled the marriage decision.

Id. p. 5. Men face the burden of attempting to gauge whether a partner is interested in marrying, and men endure the burden of rejection if they miscalculate. Men “controlled the marriage decision” only according to the realty-denying diktats of gynocentric ideology.

Rosenfeld found that wives prefer divorce about three times as frequently as husbands, but such a gender imbalance doesn’t hold among unmarried heterosexual cohabitors. That finding is consistent with the acute anti-men sex discrimination in family court decisions.

Rosenfeld concluded that his analysis is “consistent with the view that heterosexual marriage is a gendered institution.” Id. p. 20. What exactly does that mean?

Despite the institution of marriage changing and adapting (Cherlin, 2004) and becoming more diverse in terms of who marries whom (Rosenfeld, 2007), feminist scholars view heterosexual marriage as a gendered institution (Berk, 1985), which is a potential reason why wives might selectively want divorce. By gendered institution, scholars mean that heterosexual marriage reproduces and reifies traditional gender roles for men and women (Berk, 1985; Shelton & John, 1993). In their description of the post-1960 gender revolution as a stalled revolution, Hochschild and Machung (1989) describe how wives’ careers were constrained by their husbands’ expectations that the afternoon and evening shift of housework and childcare was fundamentally women’s work. Even husbands and wives who thought of themselves as holding gender egalitarian ideals were found by Hochschild and Machung to be living (and justifying to themselves) traditional gender expectations of childcare and housework as women’s work.

Id. p. 5. In short, Rosenfeld concludes that his study supports dominant gender ideology. Generating support for gynocentrism is a socially valued function of academics. That seems to be the dominant objective of much academic work today.

Tendentious, misleading studies of household labor distribution wrongly inform understanding of household economics. These studies don’t adequately count work that men do within the household. In addition, wives’ standards for how a household should be maintained are assumed to govern what work men should do. These scholarly assumptions reflect the biases of gynocentrism.

Studies asserting that wives’ living standards fall after divorce also mis-represent reality. A couple’s aggregate welfare necessarily falls following divorce due to dis-economies of separate living. Men still predominantly carry the burden of earning money to support married couples. To maintain of wife’s living standard post-divorce would require higher than 50% effective tax on the husband’s income. Faced with such a gross injustice, husbands through demoralization are likely to experience a large decline in earnings. As much as gynocentric society demands that women be protected from any harm, that’s not feasible in the context of divorce. In short, a wife with much lower earnings than her husband should expect a reduction in her living standard upon divorce.

[image] Joachim and Anna at the Golden Gate of Jerusalem, celebrating that they would have a child. Their child was Mary the mother of Jesus. Illumination in Book of Hours, with the Hours of the Virgin, the Short Hours of the Holy Cross, Prayers and Suffrages. Made about 1420, apparently used in Utrecht. From folio 4v in British Library, MS Additional 50005.