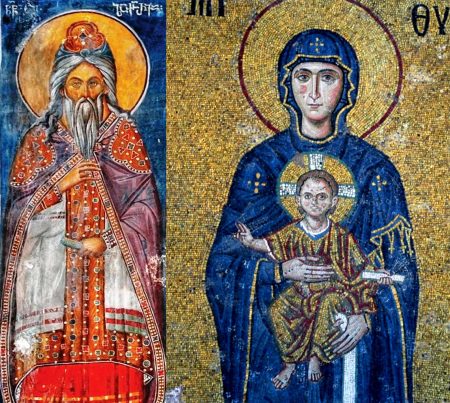 After its dedicatory preface to Theophilus (literally, “lover of God”), the Gospel of Luke presents a diptych of birth narratives in which Zechariah and Mary have sharply contrasting positions. Zechariah served the Jerusalem temple altar that was central to Jewish religious life. He was a descendant of Aaron, the brother of Moses.[1] Mary, in contrast, was a lowly young Jewish woman living in the provincial town of Nazareth. Yet the angel Gabriel treated Mary with much more respect and generosity than he treated Zechariah. Moreover, Mary had a much stronger sense of self than did Zechariah. Luke’s diptych of Zechariah and Mary should be understood as a stunning revelation of men’s weakness.

When the angel Gabriel appeared to Mary, he treated her kindly and respectfully. He greeted her warmly and affirmatively:

Greetings, highly favored one, the Lord is with you.

Mary, not surprisingly, was confused by these words. She kept pondering what sort of greeting this was. Then Gabriel said to her:

Do not be afraid, Mary, for you have found favor with God.

Gabriel went on to tell Mary that she would conceive a great son who would reign over the house of Jacob forever. Gabriel told Mary to name her son Jesus. Mary, confused, questioned the angel and offered a reason for doubt:

How can this be, since I am a virgin?

Gabriel then patiently explained to Mary that the Holy Spirit would come upon her, and that nothing is impossible with God.

The angel Gabriel treated Zechariah, in contrast, quite harshly. While Zechariah was hard at work incensing the Lord’s altar in Jerusalem, Gabriel appeared to him without any greeting and terrified him. Gabriel calmed Zechariah as he had calmed Mary, but without any personal affirmation:

Do not be afraid, Zechariah, for your petition has been heard.

Zechariah had found favor with God in the sense that his wife Elizabeth would bear a son. Just as Gabriel instructed Mary in naming, he instructed Zechariah to name his son John. Gabriel told Zechariah that John, like Jesus, would be a great son. Like Mary, Zechariah, confused, questioned the angel and offered a reason for doubt:

How shall I know this? For I am an old man, and my wife is advanced in years.

I am Gabriel, who stands in the presence of God, and I have been sent to speak to you and to bring to you this.

Then Gabriel declared that Zechariah would be punished for his questioning:

you shall be silent and unable to speak until the day when these things take place, because you did not believe my words which will be fulfilled in their proper time.

Why did Gabriel treat Zechariah so harshly?[3] Could this biblical text provide insight into why ruling authorities today hold behind bars fifteen times more men than women, and hardly anyone cares?

Mary apparently had a much stronger sense of self than did Zechariah. When Mary’s relative Elizabeth called her blessed, Mary responded:

My soul exalts the Lord, and my spirit rejoices in God my Savior,
for he has looked with favor on the lowliness of his servant. Surely, from now on all generations will call me blessed,
for the Mighty One had done great things for me, and holy is his name.

In these verses, Mary is centrally concerned with herself. Compare those verses with the first three verses that Zechariah sang in joy for the birth of his son John:

Blessed be the Lord God of Israel, for he has visited and redeemed his people,
and has raised up a mighty savior for us in the house of his servant David,
as he spoke through the mouth of his holy prophets from of old

Zechariah never referred to himself. His joy was all for his people. While Zechariah was at work in the temple in Jerusalem, he was murdered by order of King Herod.[5] Dying on the job poignantly alludes to far too many men’s fates.

Most men and women are deeply deluded about men’s social status. The formal elite of modern societies — the persons who hold positions like Zechariah did about two millennia ago — have been primarily men. They have been a very small share of men. Moreover, far from serving the interests of all men, elite men have had little consciousness even of themselves as men.

The contrast between Zechariah and Mary in the Gospel of Luke echoes the more general theme of Jesus overturning worldly status hierarchies. But that story has not yet been fully revealed and accomplished. Christians have said almost nothing about the contrast between Zechariah and Mary. The world is still groaning under the hidden hierarchy of gynocentrism.

[1] Zechariah is also known as Zachariah, which is a more accurate transliteration of the Greek form of his name. Zechariah belonged to the priestly order of Abijah. His wife Elizabeth was a descendant of Aaron. Luke 1:5. Abijah headed one of the houses of the descendants of Aaron. 1 Chronicles 24:10. Connecting Zechariah less directly than Elizabeth to Aaron in Luke 1:5 might be another way in which Luke signals gynocentrism. While Zechariah periodically traveled to work in Jerusalem, his home was in the hill country of Judea. Luke 1:39. That may have been Hebron. Joshua 21:11. Hebron is about 25 miles south of Jerusalem.

[2] This and subsequent quotes are from Chapter 1 of Luke. The Greek text is the Morphological GNT from the Blue Letter Bible. The English translation is mainly the Revised Standard Version, but in some instances I’ve used a more literal translation for particular words, or adjusted the clause order to follow the Greek.

[3] Orthodox Christian tradition indicates that Zechariah was punished for the weakness of his faith in doubting the angel Gabriel’s prophecy. See the Orthodox life of Saint Zachariah. Mary also seems to have doubted Gabriel’s prophecy for her.

The Qur’an treats Zechariah (Zachariah) less harshly than Luke. It describes his muteness as a sign indicating the truth of Gabriel’s prophecy, not punishment of Zechariah for some offense. Qur’an 19:10. It also places Zechariah among the righteous with Jesus. Qur’an 6:85.

[image] Zechariah and Mary. Image constructed from a medieval Georgian fresco of Zechariah in the Holy Cross Monastery in Jerusalem (via Wikimedia) and a mosaic of Mary, the mother of Jesus, made about 1118 GC in the Hagia Sophia in Constantinople (via Josep Renalias and Wikimedia Commons).