While men-abasing “courtly love” became a highly refined form of oppression in medieval Europe, its constituents gyno-idolatory and gynocentrism have been prevalent throughout history. The man enslaved in love, soldiering on watch for his beloved and lamenting that he is locked out, is a common figure in ancient Roman elegiac poems. That’s the context in which Paul of Tarsus condemned gyno-idolatry among particular categories of men’s sexual wrongdoing.

Paul’s condemnation of idolatry should be interpreted within its specific context. Paul declared:

Do not be deceived! Neither fornicators nor idolators nor adulterers nor catamites nor sodomites nor thieves nor the greedy, neither drunkards nor slanderers nor swindlers will inherit the kingdom of God.

At least four of the first five categories concern sexual immorality. Among those categories, catamites are men who typically, consensually are penetrated sexually by other men. Sodomites are men who typically, consensually penetrate sexually other men. Those terms indicate that Paul’s condemnation of sexual immorality is addressed specifically to men.[2] Fornicators thus means men who have sex with women to whom they are not married. Adulterers similarly means men who have sex with married women, but who aren’t those women’s husbands. But what about “idolators” situated in the middle of those terms?

Idolators as a figure of harlotry isn’t a gender-consistent interpretation. Idolatry in Hebrew scripture is associated with feminine harlotry. For example, the prophet Hosea criticized Israel:

My people consult their piece of wood,
and their wand makes pronouncements for them,
For the spirit of harlotry has led them astray;
they play the whore, forsaking their God. [3]

In Hebrew scripture, Israel, meaning the chosen people of God, is commonly figured as a woman. In Christianity, the church, meaning of the people of God, is also commonly feminine. Men’s sexual welfare disadvantage and women’s sexual privilege have created throughout history sexual markets in which men predominately pay women for sex. That means that whores historically have been predominately women. Idolators as a figure of harlotry implies that the idolators are women. That’s inconsistent with the context of Paul condemning men’s sexual immorality.[4]

With extraordinary inspiration, Paul used the term idolators to condemn gyno-idolators as another category of men engaged in sexual immorality. Gyno-idolatry involves men treating women, who are fully human beings, as if women were goddesses, or at least superior human beings. King Solomon was a pre-eminent gyno-idolator. Lucretius, the great Roman debunker of delusions, strongly condemned gyno-idolatry. Yet the brilliant Roman author Ovid suffered horrible punishment for not being a gyno-idolator. Benighted medieval knights like Lancelot became celebrated for their gyno-idolatry. Under increasingly totalitarian gynocentrism, gyno-idolatry has become a nearly unspeakable form of sexual immorality. 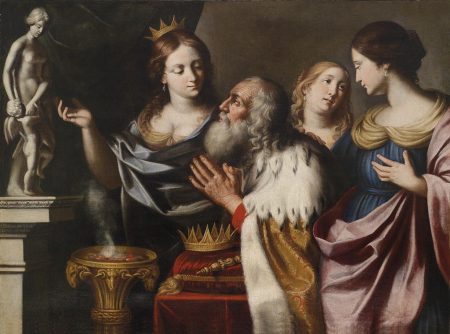 Men, do not worship your girlfriends! Husbands, do not idolize your wives! If you engage in such idolatry, you are no better than fornicators, adulterers, catamites, and sodomites. So said the wise man that Christians now call Saint Paul.

Ephesians, which may have been written by a disciple of Paul, uses idolatry (εἰδωλολάτρης) to encompass fornication, impurity, and greed. Ephesians 5:5.

[4] Orr & Walther (1995), p. 255, doesn’t recognize the gender problem in idolators being a figure of harlotry from Hebrew scripture.

Orr, William F., and James Arthur Walther. 1995. I Corinthians: a new translation; introduction with a study of the life of Paul, notes and commentary. Anchor Bible series. New York: Doubleday.

One thought on “Paul condemned gyno-idolators along with fornicators & adulterers”