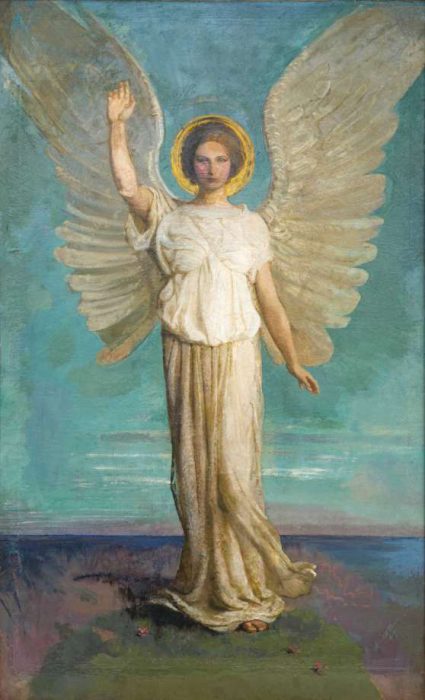 Across nearly two millennia of literature, Joseph of Arimathea is relatively silent. Joseph took Jesus’s dead body down from the cross and wrapped it in his own linen. Another man, Nicodemus, provided about a hundred pounds of myrrh and aloes to preserve Jesus’s body. Joseph of Arimathea and Nicodemus together placed Jesus’s body in a tomb.[1] In literature invoking Christian figures, why haven’t these men been given more significant voices?

In a sixth-century kontakion of Romanos the Melodist, the guards at Jesus’s tomb offer profound insight into gender hierarchy. The guards were ordinary working men. They followed orders, endured dangerous, demanding work, and one turned over a large share of his earnings to support his ex-girlfriend and her child. The guards understood the prevailing gender hierarchy:

he {Jesus} was approachable by the women,
And to us wretched men he was not approachable,
that fiery one.
He conversed with them; he threatened death to us.
Them he strengthened; and humbled us with fear,
and overtaking us, he buried us.
To the women he was gay; with us he became as one
rather haughty,
And he mortified us, but he nerved them [2]

I have seen the Lord, Christ God
uttering the word “Hail” to the myrrh-bearing women,
and one of them was a whore.
I beg to be raised up from crushing child-support payments,
I’m no silent, stoic Joseph,
and my Mary isn’t like his Mary! [3]

The guard wept. Men aren’t supposed to weep. Another guard taunted him, saying:

Man up! Stop complaining! It’s your fault!
You’re a misogynistic, slut-shaming, privileged man.
If you didn’t want to be forced to pay, you shouldn’t
have had sex with a woman.

Men live in cages that they themselves guard. Few dare ask for social justice for men:

At this the holy men, fear-stricken, said,
— For what reason has he not been seen by us?
Perhaps he thought our liberty too great?
…
Our liberty has turned to daring,
our boldness deemed contempt.
Perhaps that is why we have not seen him, for we are unworthy. [4]

Men lack confidence in their own worthiness. Men don’t understand that they are as much God-bearers as women are.[5]

Unlike men, women sense that they are highly favored. For example, Mary Magdalene didn’t regard herself as a harlot. She also had enough self-confidence to tell Jesus what to do:

Behold, you are three days dead, you, who make all things new.
You, who raised Lazarus after four days,
you, who made a swift runner of him bound with bandages,
you lie in the tomb — if I only knew where you were buried,
so I might like the harlot wet with my tears
not only your feet but yes, your whole
body and tomb,
saying, “Lord, as you raised up the
widow’s son, so raise yourself;
you who brought to life Jaeirus’ daughter,
why linger longer in the tomb?
Arise, stand by, be manifest to those who seek you,
who offer raising-up to the fallen. [6]

Men need not go as far as telling God what to do. But men must have the courage to speak to women and men about men’s wants and men’s concerns.

Jesus appreciated the need for women to instruct men. After he rose from the dead as Mary Magdalene instructed, Jesus told Mary:

So let your tongue, women, utter aloud these things,
explaining them to the sons of the kingdom
who wait for me to rise, the living one.
Make haste, Mary, and gather the disciples.
For I shall use you as a loud-voiced trumpet:
ring out peace to the fear-stricken ears
of my friends in hiding [7]

Mary responded, “Like Moses I am glorified!” So she was. Mary urged the apostles (all men) to be strong, courageous, and joyful:

Why so downhearted? Why cover your faces?
Lift up your hearts — Christ is risen.
Stand in line for the dance, and say with us
“The Lord is risen.”
He who was born before the dawn has shone out,
so cease glowering looks, send forth new shoots.
Spring is here: blossom forth branches,
in fruitfulness, not in vexation.
Let us all clap our hands and say “He is risen
who offers raising-up to the fallen.”

Romanos the Melodist included Mary Magdalene among “wise women,” “God-bearing women,” “full of wisdom.” Men should listen to her. Spring is here. Blossom forth. Men should speak out full of confidence in their own redemption.

[2] Romanos the Melodist, On the Resurrection II, st. 18, excerpt, from Greek trans. Carpenter (1970) vol. 1, p. 269. The guards’ insight can be further appreciated by comparing the differing responses of angels to Zechariah and the virgin Mary respectively questioning angelic prophecies. Compare Luke 1:20 to Luke 1:35.

[3] This stanza and the following one are my interpretations in the spirit of ancient kontakia. The former includes a quote from Romanos the Melodist, On the Resurrection I, st. 1, trans. Alexiou (2002) p. 431. Carpenter (1970), vol. 1, pp. 314-25, translates this kontakion under the title On the Resurrection VI.

[5] Emphasis on the virgin birth of Jesus tends to distance men from the divine. At the same time, the privilege of the blessed virgin Mary has been readily generalized to all women, including whores. For example, in a homily he delivered early in the fifth century, Proclus of Constantinople declared:

What we celebrate is the pride of women and the glory of the female, thanks to the one who is both mother and virgin. Lovely is the gathering! … Let nature leap for joy, and let women be honored!

Constas, Nicholas. 2003. Proclus of Constantinople and the cult of the Virgin in late antiquity: homilies 1-5, texts and translations. Leiden: Brill.