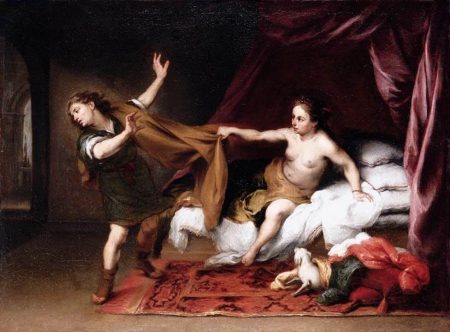 Early in the sixth century in the Byzantine capital Constantinople, Romanos the Melodist wrote two kontakia about Joseph and Potiphar’s wife. Romanos forthrightly recognized that Potiphar’s wife attempted to rape Joseph. He also denounced her falsely accusing him of rape. Yet Romanos interpreted these crimes only in relation to Joseph’s virtue. He ignored how allegations of rape buttress tyranny.

the queen entertained passionate feelings
For the lovely beauty of the young, virtuous Joseph.
As she looked at the young man with unchastened eyes,
She was wounded in spirit by his invisible glances.
…
Through her eyes she received the darts from the chaste quiver,
And, wounding her own dissoluteness,
She considered the wound a pleasure, the unhappy woman! [1]

The Devil came as an escort of adultery
In order that he might aid the Egyptian woman,
And he said to her: “Courage, since you are an old and sturdy hook,
Make ready the bait and fish for the young man.
Arrange the curls of your hair,
like a net to catch him.
Beautify the appearance of your face,
Embellishing it all with rose-colored artifice.
Brighten up your neck with chains, with chaplets of gold;
Above all, clothe yourself in an elaborate gown,
Anoint yourself with powerful perfumes that weaken young men [2]

Roughly two centuries earlier, Tertullian had influentially denounced fancy apparel for women and associated men’s penises with the Devil and women’s vaginas with the Devil’s gateway. Romanos showed some of Tertullian’s biting wit in describing Potiphar’s wife as old and sturdy (heavy/fat) in contrast to the young and beautiful Joseph. The wounding from Cupid’s arrows and the Devil’s urging provide external causes for the behavior of Potiphar’s wife. Yet Romanos didn’t go as far as Sanger’s pioneering nineteenth-century social sentence and current criminal law in freeing women from responsibility for their sexual behavior.

The woman, beside herself, inflamed by his words,
Attacked the prudent young man,
And grasped his cloak, and violently pulled the worthy young man, saying,
“Obey me, dear one, and come, have intercourse with me.”
The Egyptian woman pulled at him from one side. Virtue claimed him
on the other side.
She cried out: “Sleep with me”;
And from on high, Grace called: “Be vigilant with me.”
Along with her, the Devil struggled mightily
And with violence held bound the noble athlete.

Today, rape of men tends to be ignored or treated as risible. Romanos treated the rape of Joseph seriously. Joseph was a boat being battered in a wild storm, a man thrown into a burning furnace, and an athlete struggling in a physical contest.[3]

After her sexual assault on Joseph failed, Potiphar’s wife falsely accused Joseph of rape. As in many false accusations of rape, that false accusation produced a travesty of justice:

For the Egyptian woman, through a cruel trick,
Excited Potiphar with false accusations,
Pushing all the blame on the noble-minded youth.
Showing him the robe of Joseph,
Drowned in a sea of tears, because of her desire,
She persuaded him to send Joseph to prison as he cried:
“The Lord, our Savior, alone is mighty.”

If he had had wisdom, he would not have allowed the trick to deceive him.
You are a foolish judge! as evidence
You have Joseph’s robe; ask where it is,
And consider if she is to be trusted.
If she fled from him, then how does she possess his robe?
You think that the free slave {Joseph} is at fault,
But you will see him shine like light as he cries:
“The Lord, our Savior, alone is mighty.”

The problem goes far beyond Potiphar and Joseph. Major newspapers now run mendacious stories claiming that nearly a quarter of men admit to committing rape. Rape is at the epicenter of the collapse of reason.

For Romanos the Melodist, Potiphar’s wife’s sexual assault and false accusation of rape was a allegory for personal struggle with sin. Romanos concluded his kontakion on Joseph with first-personal questioning:

What, then, am I to do, miserable and condemned,
Since on all sides the hand of sin oppresses me?
Just as the Egyptian woman attacked Joseph,
Just so sin draws me to impure thoughts.
But I cry to Thee, All-Powerful,
“Save me, too, since I am ruled by a tyrant,
So that, through the intercession of the Virgin, I may be saved
Like Joseph, your faithful servant,
Since the eye that never sleeps observes all things.

The risk of tyranny is not just within persons. Today, the eye that never sleeps observes all things and weeps.

The “you” is probably not directed just to the Egyptian woman, but rather to all women who, like Eve, cause man’s ruin.

Not all women are like that. Thetis and Hiera are among the many strong, independent women throughout history who have denounced injustices against men and defended and protected men. Within the specific context of Romanos’s kontakion, the emphasis on Joseph’s youth and beauty sets up a clear antithesis to Potiphar’s wife, an “old and sturdy” woman. In modern urban parlance, Potiphar’s wife was a cougar.

[3] Joseph the athlete is Romanos’s most extensive metaphor for Joseph resisting Potiphar’s wife. Romanos describes his kontakion as providing an “encomium of the noble athlete.” On Joseph II, 20.10, p. 113. Romanos also figures Joseph as a warrior who “wore an invulnerable armor / That destroyed the effect of all the engines of war of the passions.” Id. 21.12-13, p. 114.

[image] Potiphar’s wife sexually assaulting Joseph. Oil on canvas by Bartolomé Esteban Murillo in the 1660s. Thanks to Web Gallery of Art and Wikimedia Commons.