In the ancient world, public laws declared severe punishments for men who committed adultery.  Under the ancient Mesopotamian Code of Hammurabi, if a married woman had sex with a man other than her husband, that man would be executed through drowning.[1]  Under ancient Egyptian law, such a man would be flogged with one thousand blows with a rod.[2]  The book of Deuteronomy, a sacred text of Jewish law, declares that a man who commits adultery shall be killed.  The context suggests execution by stoning, while some Jewish legal authorities have interpreted the execution to be by strangulation.[3]

Law from the celebrated ancient Greek lawgiver Zaleucus reportedly imposed a significantly different punishment for men who committed adultery.  The earliest source for the story of Zaleucus’ punishment for adultery is the Roman Valerius Maximus, writing about 30 GC.  Valerius recounted:

Zaleucus protected the city of Locri with very salutary and useful laws.  His son was convicted on a charge of adultery and according to a law constituted by Zaleucus himself was due to lose both eyes.  The whole community wished to spare the young man the necessity of punishment in honour of his father.  For some time Zaleucus resisted, but in the end, overborne by the people’s entreaties, he first gouged out one of his own eyes, then one of his son’s, leaving the faculty of sight to them both.  Thus he rendered to the law a due measure of retribution, by admirable balance of equity dividing himself between compassionate father and just lawgiver.[4]

A text from no later than the second century BGC tells a similar story of Locrian law, but concerns theft rather than adultery:

If anyone is caught stealing, his eyes are gouged out. The son of Zaleucus was caught {stealing} and when the Locrians let him go, Zaleucus did not allow this, but he gouged out one of his own eyes and one of his son’s. [5]

These are sensational stories.[6]  For theft, a physical punishment more directly fitted to the crime would be cutting off hands.  For example, the Code of Hammurabi declared: “if a son strike his father, his hands shall be hewn off.”[7]  Gouging out a thief’s eye suggests a more abstract association with covetousness.  Valerius’ account recast the crime from theft to adultery, but retained the underlying idea of the eye motivating illegal desire. 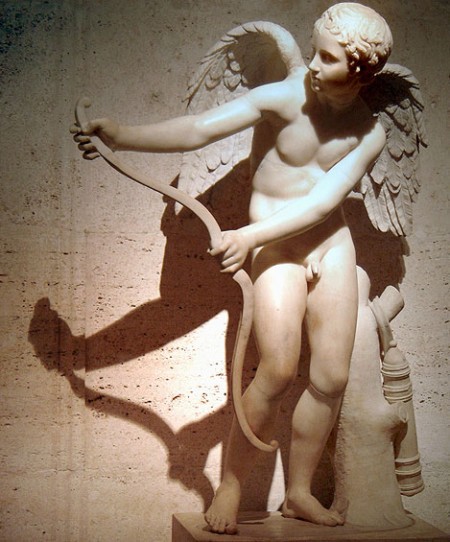 The story of Zaleucus gouging out eyes for adultery drew upon important physiological and poetic literature.  Cupid shooting love arrows was a well-established figure in Greek and Latin literature 2000 years ago.  For example, Ovid’s Metamorphoses tells of Cupid shooting an arrow of love that pieced Apollo’s heart.  Apollo, thus lovesick, exclaimed:

Sure are my arrows, but one surer still
Has struck me to the heart, my carefree heart.
The art of medicine I gave the world
And all men call me “healer”; I possess
The power of every herb.  Alas! that love
No herb can cure, that skills which help afford
To all mankind fail now to help their lord! [8]

Apollo, well-known for outrageous behavior, thus appropriated the origin of medicine.  In physiological writing, Aristotle described visual spirits entering the eye and traveling to the heart.[9]  Under the law of the ancient Greek lawgiver Zaleucus, gouging out adulterers’ eyes would prevent future danger from Cupid’s arrows to the eyes. The danger of glances and Cupid shooting arrows into eyes subsequently became a theme in Islamic and medieval European literature.[10]

Other than in legends of the ancient Greek lawgiver Zaleucus, known laws have never specified gouging out of men’s eyes for adultery.  Modern, harsh penal regulation of male sexuality isn’t specifically rooted in classical Greco-Roman law or in medieval European Christianity.  It has arisen from more general features of human social nature.

[1] Code of Hammurabi (c. 1780  BGC), trans. L.W. King, law #129.  Under that law, a husband could pardon his wife for adultery, but only the King could pardon the man.  In modern legal terms, criminal law concerns law for which the sovereign governs prosecution.  In that sense, men were criminalized for adultery, but women weren’t.  The code of Hammurabi and similar codes appear to be mixtures of statutory and case law.

Severe also were their laws touching women. For if a man had violated {by force, i.e. raped} a free married woman, they stipulated that he be emasculated, considering that such a person by a single unlawful act had been guilty of the three greatest crimes, assault, abduction, and confusion of offspring; but if a man committed adultery with the woman’s consent, the laws ordered that the man should receive a thousand blows with the rod, and that the woman should have her nose cut off, on the ground that a woman who tricks herself out with an eye to forbidden licence should be deprived of that which contributes most to a woman’s comeliness.

Library of History (Bibliotheca historica) Bk. I, Sec. 78, para. 4. Attacks on men’s genitals feature commonly as informal, private punishment in Old French fabliau.  Marie de France included in her romance Bisclavret the cutting off of a woman’s nose.  A punishment of men for adultery in Athens in the 5th and 4th century BGC reportedly was forcing a radish into the man’s anus (rhaphanidosis).

[3] Deuteronomy 22:22.  According to the Jewish Encyclopedia:

The punishment for Adultery according to the Mishnah (Sanh. xi. 1) was strangulation; the rabbinical theory being that wherever the death penalty was mentioned in the Bible, without any specific statement of the manner of its infliction, strangulation was meant (Sifra, Ḳedoshim, 4, 9).

The Jewish Encyclopedia also notes that Jews abolished the death penalty in the year 40.  The Roman Empire throughout its existence continued to punish persons with death, including by crucifixion.  High-status Romans sentenced to death were able to choose their own means of death.  The Roman Emperor Augustus “forced Polus, a favourite freedman of his, to take his own life, because he was convicted of adultery with Roman matrons.”  Suetonius, Life of Augustus, 67.

Zaleucus was accounted wisest of men among the Locrians acting in the name of Minerva {Athena}.

Valerius introduced the story of Zaleucus with admiration, “Nothing could be braver than the following examples of justice.”  The subsequent example concerns Charondas of Thurii.  Charondas made a law stating that anyone who entered an assembly armed would be put to death.  Charondas inadvertently attended an assembly armed.  Informed of that mistake, Charondas immediately fell on his sword on his own initiative.  Id. Bk. VI.4 ext. 4.  Valerius rose from poverty and social obscurity to join the Roman literary and political elite (Gagarin (1986), p. 58; an Aristotelian text describes Zaleucus as originally a non-free shepherd).  Valerius’ Memorable doings and sayings celebrate and disseminate elite Roman knowledge and values. The Locrians under Zaleucus were also known for requiring anyone proposing a law to do so with a noose around his neck. Claudius Aelianus (ca. 175 – ca. 235) included the story of Zaleucus gouging out eyes for adultery in his Varia Historia,  13.24.

The story of Zaleucus gouging out his eye was widely disseminated  in the medieval story-collection Gesta Romanorum, Tale 50, from Latin trans. Swan & Hooper (1876) p. 86; Tale 49 in the Anglo-Latin Gesta Romanorum, Bright (2019) pp. 306-9. James Yonge added that story to his translation of the Secret of Secrets in 1422 in Ireland.  For text, see Steele (1898) p. 128.  Yonge attributed the story to “the wise scholar Valerius.”

[6] Mittica (2008) reviews some surviving texts about Zaleucus （Ζάλευκος). In Cicero, De Legibus 6, Quintus says that Timaeus the Historian (c. 345 BGC – c. 250 BGC) denied that Zaleucus ever existed.  Plutarch describes Lycurgus, another ancient Greek lawgiver, as having lost one eye.  Parallel Lives, Lycurgus 11.  Such a story may have contributed to the story of Zaleucus gouging out eyes as punishment for adultery.  Even if Zaleucus actually existed, the story of him gouging out eyes almost surely is a literary construction.

[10] In Islam, the hadith reported by al-Tirmidhi, 2701, warns of a “second glance.”  See also the Qur’an, Surah 24 (Al Nur), 30-31.  On shooting arrows of love into men’s eyes in medieval Europe, Stewart (2003).  Id., p. 13, describes a shift from the classical figures of Cupid’s arrow to the heart to the medieval figure of Cupid’s arrow to the eye.  That account seems to be overdrawn. Heliodorus, Aethiopica 3.8, describes love shooting through the eye and into the heart. Similarly Achilles Tatius, Leucippe and Clitophon, 1.4.4, describes love striking the soul through the eye. Valerius’s account is consistent with that trajectory of love.

[image] Eros (Cupid) with bow, Roman copy after Greek original by Lysippos, marble sculpture in the round, 2nd century GC.  In Capitoline Museums, Italy.  Image thanks to Ricardo André Frantz and Wikipedia.