One night, a woman was in bed with a young, handsome squire.  Her husband unexpectedly and quietly returned home.  He entered the bedroom by candlelight, suspecting nothing. The wife bolted upright in fright.  The squire ducked under the covers unnoticed.

The wife scolded her husband for frightening her and returning home to spy on her.  The husband explained:

Be quiet.  Don’t be afraid.  Calm yourself, dear, for never has it been in my heart to come home to spy on you, nor have I ever had any idea that I could catch you in some wickedness. So relax, don’t let this upset you. [1]

The husband then sat down at the foot of the bed.  The squire under the covers trembled uncontrollably.  The wife was deathly pale.  The husband apologized for surprising her and frightening her.

The wife then brought the husband into a new story-world.  She said to her husband:

Tell me, if you had found a man here by my side, and no mistake about it, what would you have done?  Would you have allowed such a thing to pass?

The wife, with superb womanly guile, laughed at the husband’s hypothetical-forceful response.  She then threw a petticoat over her husband’s head and held it there so as to blindfold him.  Then she kicked the squire out of the bed.  He quickly, quietly fled, naked.  The wife meanwhile held her husband tight and laughed and fooled with him.  The wife said to her husband:

So I would have held you tight until I had sent him on his way.

Taking the petticoat off her husband’s head, she said:

Now he has escaped. He will not be caught today.  Run after him!  He is getting away!

Jean de Condé, the author of this petticoat fabliau, told it within a frame that further connected reality and fiction.  Condé introduced the fabliau with this tale preface:

I should now like to tell a true tale about a remarkable and quick-witted piece of deception.  But had someone discovered this fine deceit and the way it was devised, the lady of our tale would surely have been in a fine mess.

Condé’s conditional-hypothetical morally justified his telling the tale by implicitly promising a different outcome in the real future.  He ended the fabliau with an imaginary justification for narrative inconsistencies:

I don’t know what else to say of this matter: one needn’t worry about her hiding the squire’s clothes, for if she could carry out such a trick, the clothes would not present her with much more difficult.  Truly I know no more about it, and so I end my tale here.

Just as for the story of Hippocrates in the thirteenth-century Lancelot-Grail Cycle, this early fourteenth-century Old French fabliau makes truth and fiction an issue within its own meta-construction. 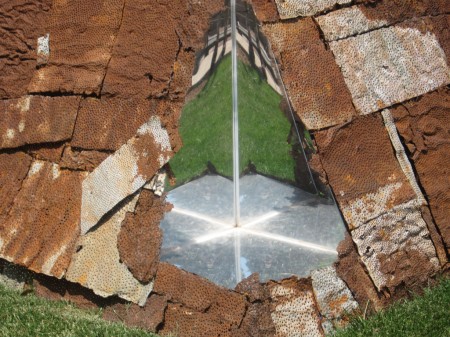 The literary ingenuity of the petticoat fabliau distinguishes it from other fabliaux telling similar stories.  A work from early twelfth-century Spain includes two tales of a wife obscuring her husband’s vision in order to allow her lover to escape.  In one, a husband-vintner returns home unexpectedly with an injured eye.  The wife kisses the other, functioning eye, covering it long enough to allow her lover to escape unseen.  In the other tale, the wife and her mother stretch out a linen, ostensibly proudly displaying it to the husband, but actually providing cover for a lover to escape.[2]  Both of these tricks are non-literary.

Another fabliau narrates elaborate lies to cover cuckolding.  A wife tells her husband a story to explain why a horse, hawk, and clothes of another man are at their house.  After accepting the story, the husband goes to sleep with his wife.  The wife’s lover then escapes.  In the morning, when the lover’s horse, hawk, and clothes are gone, the wife denies that those goods had ever been at their house.  When the husband tells the wife the story that she told him, the wife denies telling the story, criticizes the story as ridiculous, and declares that the husband’s mind has become unhinged. The husband again believes the wife.  He sets off on a pilgrimage to seek God’s favor to restore his memory.  The husband’s pilgrimage gives the wife new, better freedom to cavort with her lover.[3]  While this fabliau is more literary than a simple trick, it doesn’t involve a real-time performance of a story that a cuckolded husband believes to be fictional.

The petticoat fabliau intricately inter-relates reality and fiction.  It provides views across nested worlds.  Jean de Condé was not just retelling an old folktale.[4]  His petticoat fabliau has a highly creative literary structure.

[1] Jean de Conde, The Tale of the Petticoat {Li dis dou pliçon}, Old French fabliau trans. Hellman & O’Gorman (1965) p. 68, adapted slightly.  The verbal choice “could” rather than “would” is from the translation and delightfully subtle.  All subsequent quotes are from id. pp. 67-70, with minor adaptations.

[4] Hellman & O’Gorman (1965), p. 70, traces the petticoat fabliau to the lore of India, the vintner’s tale in Disciplina Clericalis, and the incident in Aristophanes’s Thesmophoriazusae in which Mnesilochus claims to have cuckolded her husband by feigning sickness and going out to have sex with a lover (by Apollo’s pillar, bending over the laurel tree). The cuckolding story in Thesmophoriazusae involves multiple levels of deception, but not the real-time inter-relation of reality and fiction that occurs in the petticoat fabliau.

[image] my photograph of El Anatsui, Ala (2013), site-specific installation at the Smithsonian Gardens.