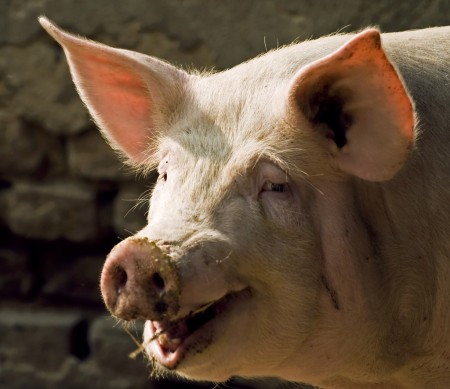 Men are pigs, some say disparagingly today. That’s regarded as disparagement only because of men’s different bodies. Men cannot speak from their different bodies. In Plutarch’s Gryllus, a differently bodied man — Gryllus the pig — is magically given the ability to speak. Gryllus convincingly establishes the innate virtue of being male for all animals but men.[1] Men must become pigs if human societies are to achieve a virtuous ideal of gender equality.

The cultural construction of gender forces men to struggle to be virtuous. Gryllus astutely points out, “men do not naturally possess manliness {ἀνδράσιν οὐ φύσει μέτεστι τῆς ἀνδρείας}.” Men must engage, symbolically or literally, in violence against men and acquire wounds on their chests to be respected as men. To be virtuous is a burden of masculine performance and cultured achievement.[2] Women, in contrast, are valued for nothing more than their natural bodily features. Men lack women’s gender privilege.

Imagine a better life than that of men. Gryllus, a male pig, lives with his fellow male pigs without the need to do any work. The woman-witch Circe provides for their welfare. Almost all men lack the opportunity for a similar life. Gryllus thus refers to “men, the most unfortunate of all creatures {ζῷον αὖθις ἀνθρώπους γενομένους}!”[3]

The females are not coy and do not cloak their desires with deceits or trickeries or denials; nor do the males, driven on by the sting of mad lust, purchase the act of procreation by money or toil or servitude. No! Both parties celebrate at the proper time a love without deceit or hire, a love which in the season of spring awakens, like the burgeoning of plants and trees, the desire of animals, and then immediately extinguishes it.

Good governments should support all human adults’ entitlement to sex. The goal should be to give humans equal sexual capabilities to other animals. That’s a crucial component to enlightened efforts to raise human welfare.

The generic “man” throughout the history of human literature indicates lack of self-consciousness in speaking about bodily men. Inability to appreciate their own bodily distinctiveness separates men from other male animals. Male pigs don’t write about an abstract, sexless pig. They probably don’t even think about one. Not reasoning about a fantasy is reasonable. Pigs think about their real bodily conditions and real bodily desires. Male pigs think as animals with male genitalia. That’s good sense. That’s reasonable.[4]

Urging men to act like pigs promotes a virtuous ideal of gender equality. Dominant ideology today urges the domestication of men and the feminization of their temperament. That’s a strategy to achieve gender equality through gender uniformity. Gryllus recognizes that such a strategy works for animals. He also recognizes that it makes male animals spiritless and without courage.[5] Moreover, domestication tends to be associated with the extreme of outright neutering. A more temperate and sensible approach retains the courage of animals. Gryllus points out that animals naturally behave in accordance with gender equality. In acting like pigs and refusing to return to the oppressive position of men, men uphold a virtuous ideal of gender equality.

[1] In Homer’s Odyssey Bk. 10, Circe was a woman with beautiful hair and an enthralling voice. She was also a witch. She turned half of Odysseus’s men into pigs. The setting of Plutarch’s Gryllus is Odysseus asking Circe to turn them back into men. She declares that the men prefer to be pigs. She gives one of the men-pigs named Gryllus the power of speech to convince Odysseus that being a pig is superior to being a man.

Here’s an online English translation of Gryllus (Loeb Classical Library, 1957). All the quotes above from Gryllus are from the Loeb translation. An edition of the Greek text. is also available online. Gryllus is also known under the Latin title Bruta animalia ratione uti (Non-human animals are rational) and the Greek title ΠΕΡΙ ΤΟΥ ΤΑ ΑΛΟΓΑ ΛΟΓΩΙ ΧΡΗΣΘΑΙ (On the fact that unreasoning creatures employ reason). While leading scholars now attribute the work to Plutarch, the authorship of Gryllus has been questioned. Whether attribution to Plutarch is correct isn’t relevant to the above discussion.

[2] The quote from Gryllus is from 988B. The Loeb edition translates ανδρεία as “courage.” Konstan (2011), p. 378, provides the more linguistically rooted translation “manliness.” The English word “virtue” comes from the Latin word virtus. Virtus is rooted in vir. Vir means male human being. The Greek term associated with virtue is ἀρετή (arete). That term is linguistically rooted in excellence of any kind. The Greek term thus highlights the burden of performance and achievement associated with being a man. For an insightful discussion of how Plutarch plays with the ancient Greek understanding of virtue, Konstan (2011).

[3] Reflecting the obliteration of male human beings in gynocentric society, the Greek term ἀνθρώπους is commonly mistranslated as human being. See, e.g. Konstan (2011) p. 374. The context in Gryllus makes clear that the reference is to male human beings.

[4] The intelligence of pigs has deep implications for today’s academia:

Limiting one’s engagement with society through a preference for abstraction and dogmatic figures or for archaizing rhetorical practices can become an escapist fantasy. … an important implication of the Gryllus, then, that as the recipients of certain vestments of elite culture, the learned risk alienation — that is, at some point of extravagance paideia becomes merely an introspective fantasy.

[image] The Big Pig. Thanks to Daniele Pieroni for sharing on flickr, CC-BY-SA.