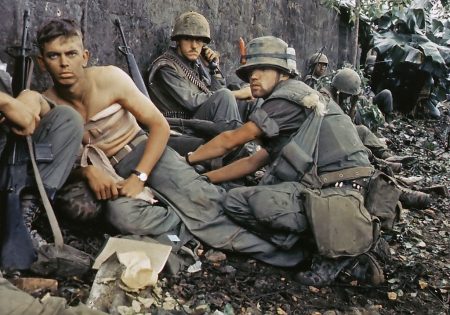 Men live a significantly shorter lifespan on average than women, and about four times as many men die from violence as do women. At the same time, about fifteen times more men than women are held in prisons. These fundamental anti-men gender inequalities are rationalized and socially obscured in a variety of ways. Hippodameia and Theano in Quintus of Smyrna’s Posthomerica and Hypermnestra in Ovid’s Heroides show how ridiculous claims pass for reason to keep men exposed to vastly greater mortal danger and punishment.

Friends, let the hearts within your breasts be brave,
no less than those of our husbands, who for the fatherland
are fighting the foe on behalf of our children and ourselves
with no relief from suffering. Let us also fill
our hearts with courage and take an equal share of fighting.
We are not far removed from the strength of men.
The vigor that there is in them also is in us.
Our food is the same. So what advantage is given to men
by heaven? Let us then not shrink from battle. [1]

Men being socially used for war is no advantage for men. Asserting otherwise is obfuscatory rhetoric of dominant gynocentric interests. Hippodameia further showed how men’s deaths are rhetorically constructed as relatively unimportant:

Our affliction is such that we can delay no longer
the joining of battle. Better by far to die in the fighting
than afterward to be led with our helpless children
by foreign masters under painful compulsion,
our city in flames and our men no longer living. [2]

Military victory in the ancient world often involved androcide: all the men in the defeated society were killed. The women and children from the defeated society, however, were assimilated into the victorious society.  On any reasonable measure of personal welfare, being alive is better than being dead. The heroic claim “better to die fighting” is reasonable only in the context of men dying whether they fight or surrender. Women have traditionally had much better alternatives than men in war.

Another Trojan woman, Theano, illustrates how women’s privileges persist. After Hippodameia’s speech to them, the Trojan women were impassioned to head onto the battlefield. They were ready to take up “hateful fighting” and to put “their hands to instruments of pain.” Theano, however, dissuaded the Trojan women from shouldering an equal share of the horrendous fighting:

Why this desire to work amid the fearful fighting?
You poor things, you have never worked in a battle before.
In your ignorant keenness for an intolerable task
you rush without a thought. Your strength won’t equal
that of the Danaans {Greeks} who are trained in fighting. [3]

Just because women have never done a horrendous job before, doesn’t mean that women can’t do it. All the dirty, dangerous jobs that men traditionally have done, and continue to do vastly disproportionately, women could do equally. What’s needed is a strong public commitment to bringing about that outcome, or at least a public commitment like that for bringing about gender equality among corporate executives and elite scientists.

Theano smoothly shifted between recognizing the unity of the human race and the diversity of individuals to endorsing the exploitation of men as soldiers. Theano rationalized for the Trojan women:

All humans belong to a single race, and yet the work
that they pursue is varied; that work is the best
which each one plies with understanding in his mind.
Therefore stay away from the noisy battle
and busy yourselves with the looms inside your homes.
War shall be the business of our menfolk. [4]

From an individualistic perspective, each person should choose the job that she finds most suitable for her. Men have various interests and abilities, just as women do. Yet when assigning horrendous jobs, defining crimes, or specifying the last persons off sinking ships, gynocentric society naturalizes disadvantages for men. Underscoring that her arguments for the anti-men gender division of labor are rationalizations, Theano concluded with a contextual rationalization: “there is no desperate need for women to join in the fighting.”[5] In the U.S., such rationalizations have allowed men-only Selective Service registration to persist for decades despite intense public concern for gender equality.

Quintus of Smyrna’s virtuoso display of rationalizations for anti-men gender inequality probably drew on earlier literature. Quintus wrote in Greek, probably in the third century GC. Ovid, writing his Heroides in Latin about the time of Jesus of Nazareth’s birth, included related rationalizations in Hypermnestra’s letter to Lynceus.[6] Hypermenstra’s father Danaus was one of the many men throughout history who have encouraged women to defy traditional gender roles. When an enemy ruler coercively married his fifty sons to Danaus’s fifty daughters, Danaus assigned his daughters the mission of killing their husbands on their wedding night. While her husband was asleep, three times Hypermenstra put a sword to his throat. Yet she balked at her warrior mission:

I am a woman and a maiden, gentle in nature and in years;
Soft hands are not suited to fierce weapons.
…
What crime has been committed by me that I am not allowed to be virtuous?
What have I to do with a sword? What does a girl have to do with warlike weapons?
The wool and the distaff are more suitable for my hands. [7]

The strength of one’s hands has no relevance to killing with a sword a sleeping man. A girl can kill a sleeping man as easily as a man can. Men are no more naturally vicious and evil than women are. Simply because he is a man, a man doesn’t necessarily have anything more to do with warlike weapons than he has to do with wool and distaff. Men are forced to strive to be virtuous in horrible ways. The social construction of gender throughout history has tended to assign killing to men. Yet culpability for killings in war belongs at least equally to women.

[1] Quintus of Smyrna. Posthomerica 1.409-19, from Greek trans. James (2007) p. 13. Id. capitalizes the first word of every poetic line. To make the translation more readable for persons not accustomed to reading poetry, I’ve changed the capitalization to that of prose. All quotes from Posthomerica are similarly from id. A.S. Way’s English translation (1913) of the Posthomerica for the Loeb Classical Library is available online.

Hippodameia appealed to the example of the Amazons as women warriors. But that example is inapt. The Amazons hated men. Most Trojan woman, like most women generally, probably didn’t hate men. Moreover, Achilles easily killed Penthesileia in battle. She was the Amazons’ leader and their most proficient warrior. Women should fight not because they hatefully and foolishly seek to be like Amazons, but because they recognize their obligation to uphold the ideal of gender equality.

Dillon notes that Theodorus of Asine, a neo-Platonist philosopher from the first half of the fourth century, presented arguments favoring gender equality. Three of Theodorus of Asine’s arguments are closely related to arguments that Hippodameia and Theano make. Dillon (1995). Dillon fails to recognize how little effect these and many other arguments through the ages have had on anti-men gender inequality.

Making current canonical-form scholarly claims and showing little originality, Boyten describes Penthesileia as a hero modeled on Hector. According to Boyten, Penthesileia is a threat to masculinity and gender:

Her presence threatens not only Achilleus’ masculine heroism, but also the social structure through her impact on women en masse. … Thus, I argue, Penthesileia’s presence and its consequences can be understood in a wider context as exploration not only of, and challenge to {emphasis in original}, gender, but also with regards to other forms of convention, including genre itself.

The Posthomerica has been appreciated as brilliant literature by critics from the late-fifteenth century to the nineteenth century. However, in the late-nineteenth and twentieth centuries, the Posthomerica was roundly disparaged. Over the past decades, scholars have begun to recognize again its literary merit. On the critical reception, Baumback & Bär (2007i) pp. 15-25. Id. pp. 2-8 dates this epic to the third century GC. Boyten (2011) and Maciver (2012) are more recent, lengthy studies appreciating Quintus’s poetic work.

In the Aeneid, Virgil shows through the example of the Volscian Camilla gynocentrism translated to the battlefield. Camilla, a woman, is the focus of attention when she joins the fighting among the many allies of Turnus. Aeneid 7.803-17. In her death speech, she assumes her own preeminence and issues orders for Turnus. Aeneid 11.823-7. For a reading a Camilla in accordance with dominant gender ideology and the hackneyed academic theme of ambiguity, Becker (1997). For parallels between Virgil’s depiction of Camilla and Quintus’s depiction of Penthesileia, Fratantuono (2016).

[4] Posthomerica 1.464-9. Quintus associates Theano with Athena through the Theano of Iliad 6.297-310. Homer’s Theano is a priestess of Athena. Given the sophisms of Theano in the Posthomerica, that association seems intended ironically.

Homer provides a straight-forward depiction of women’s privilege in war. In the Odyssey, the Trojan warrior Hector, heading out to fatal battle, tells his wife Andromache:

So please go home and tend to your own tasks,
the distaff and the loom, and keep the women
working hard as well. As for the fighting,
men will see to that, all who were born in Troy
but I most of all.

[5] Posthomerica 1.474. In desperate circumstances, the women of Lavinium fought against the Trojan forces:

Even the mothers strove their utmost — the true love of their native land showed them the way and Camilla was their example. Wildly they hurled missiles from the walls and rushed to do the work of steel with stumps and stakes of oak wood hardened in the fire, longing to be first to die in defense of the walls of their city.