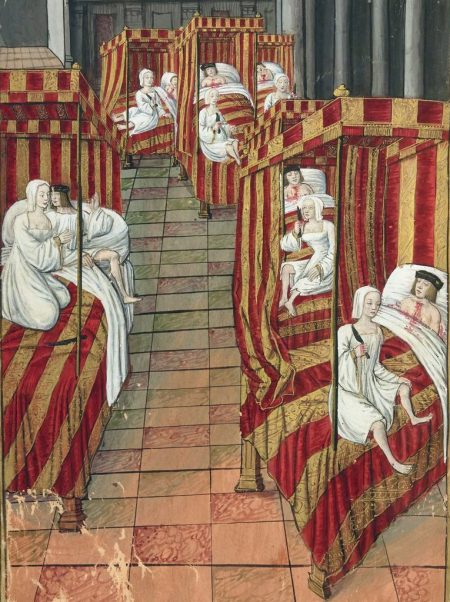 I, Lynceus, send this letter to my virgin wife Hypermnestra, sister of my brothers’ murderers, the Danaides.

My dreams recall you, dreams brighter than the beautiful day, and I find you there, although you are absent from this place. Sleep does not hold onto its delights long enough. Often I dream that your arms are around my neck, and I recognize in sleep your kisses that you used to give and take with your tongue. Sometimes I delude myself and speak words that seem like the truth. Then my mouth keeps watch over my senses. Yet I’m ashamed to mention the things that happen beyond this … but I’m not permitted to sleep dryly, all happens, and I delight.

Why did I take more pleasure than I should in your golden hair, and your comeliness, and the lying favors of your tongue? If not, once your hostile ship had beached on our sands, and had brought you young Danaides here, what great treachery would have died with you, you wicked women! What great evils would have been averted from my brothers’ lives!

My father is betrayed, kingdom and country forsaken, for which my reward is to suffer exile. Your virginity remains the prize of a frigid wife, my most dearly beloved sister, meant to be my lover. Where is divine power? Where are the gods? Justice is near us in the deep, you punished for fraud, I for credulity. I wish that the clashing rocks, the Symplegades, had crushed us, so that my bone might bang against your bones. Or ravening Scylla might have caught us, you to be eaten by her dogs. Scylla is destined to harm frigid women with murderous sisters. And Charybdis, who so often swallows and spews out the tide, should also have sucked me beneath Sicilian waters.

As you ordered, I left the house, unaccompanied by my brothers, and, what will pursue me always, with my love of you. When suddenly the songs of Hymen came to my ears, and the torches shone with illuminating fire, and the flutes poured out the marriage tunes for me, and I mournfully dreamed of you. I was afraid. I hadn’t thought till now so much wickedness could be, but still I was chilled to my bone. In my dream the crowd rushed on, continually shouting, ‘Hymen, Hymenaee!’ and the nearer they came, the worse it was for me. The servants in the morning would weep — who wants to be the bearer of such evil news?

It would have been better for me not to know what happened. My brothers’ shades find in me offerings to the dead. I abandon my lost kingdom, my country, my home, my virgin wife, who loved me only not to kill me. The day does not please me. I awake from wet dreams to the bitterness of being alone at night. I beg you, by the gods, by the light of the Sun, by my grandfather’s fire, by my kindness to you, and by the specter of your childless future, return to the bed for which my brothers, insanely, have been so brutally murdered! Add truth to your words, and love me in a way you would not love your father.

That you live, that you have a father and beautiful siblings — all that’s been slashed away from me. I remember I used to say: “Lying, faithless whores!” Then my brothers married your murderous virgin sisters, and you became my virgin wife. Now I cry, “Men, never trust in women!” My love is betrayed: only the wind has changed. The worm will turn … but why should I be concerned to warn you of your punishment? My anger throngs with monstrous warnings. Where my anger leads, I’ll follow. Perhaps I’ll regret my deeds. I regret having concern for a frigid woman with murderous sisters. Let the god see to it, who now disturbs my heart. Something momentous surely now drives my mind!

Greek myth about Danaus and Aegyptus and their fifty daughters (the Danaides) and fifty sons dates to the archaic period. References to this myth exist in surviving fragments of Hesiod’s Catalogue of Women. The myth is recalled in the early fifth-century BGC works of Aeschylus (The Suppliants, Prometheus Bound) and odes of Pindar (Pythian 9, Nemean 10). Pseudo-Apollodorus’s Bibliotheca (Library), written perhaps in the second century GC, provides a summary of central aspects of the myth:

Both {the brothers Aegyptus and Danaus} had children by many wives; Aegyptus had fifty sons, and Danaus fifty daughters. As they afterwards quarreled concerning the kingdom, Danaus feared the sons of Aegyptus, and by the advice of Athena he built a ship, being the first to do so, and having put his daughters on board he fled. … But the sons of Aegyptus came to Argos, and exhorted Danaus to lay aside his enmity, and begged to marry his daughters. Now Danaus distrusted their professions and bore them a grudge on account of his exile; nevertheless he consented to the marriage and allotted the damsels among them. … When they had got their brides by lot, Danaus made a feast and gave his daughters daggers; and they slew their bridegrooms as they slept, all but Hypermnestra; for she saved Lynceus because he had respected her virginity. In response, Danaus shut her up and kept her under guard. But the rest of the daughters of Danaus buried the heads of their bridegrooms in Lerna and paid funeral honors to their bodies in front of the city. Athena and Hermes purified them at the command of Zeus. Danaus afterwards united Hypermnestra to Lynceus, and bestowed his other daughters on the victors in an athletic contest.

Ovid’s Heroides 14 is a letter that Hypermnestra wrote to Lynceus. Hypermnestra describes herself as a virgin and a sister to Lynceus. Heroides 14.55, 123.  Hypermnestra asserts that she is wholly innocent of the murder of Lynceus’s brothers. She claims that she deserved to be honored for not killing her husband after she nearly did so three times. She implores Lynceus to come and rescue her, at considerable risk to himself. In short, Hypermnestra’s letter is completely self-centered. Moreover, as Vaiopoulos (2014) shows, Hypermnestra seems to have implicitly expressed sexual interests.

The above text is adapted from Ovid’s Heroides 15 (Sappho to Phaon), Heroides 12 (Medea to Jason), and Fasti 3 (March 8, Ariadne’s lament). In the later, Ariadne declares:

I remember I used to say: “Perjured, faithless Theseus!”
He abandoned me: now Bacchus commits the same crime.
Now once more I’ll cry: “Woman, never trust in man!”
My fate’s repeated, only his name has changed.

From Latin trans. A.S. Kline. The text above is adapted from the translations of Kline and James M. Hunter.

5 thoughts on “Lynceus to virgin Hypermnestra, whose sisters murdered his brothers”