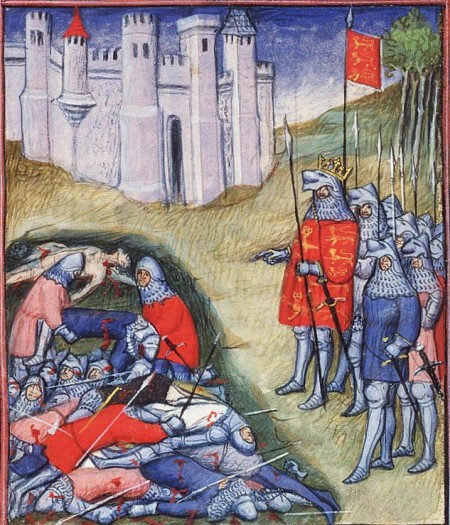 The fourteenth-century French knight Geoffrey de La Tour Landry experienced personally horrendous violence against men. Surviving records indicate that he was at the siege of Aguillon in 1346, fought on the losing side in the Battle of Auray in 1364, engaged in the siege at Cherbourg in 1378, and served in war in Brittany in 1380 and 1383.[1] Within this time of the Hundred Years’ War, noblemen such as Geoffrey had an average lifespan nearly ten years less than noblewomen. Women throughout history have played an important role in inciting men to violence against men. In a loving book of teachings for his daughters, Geoffrey used biblical stories to instruct his daughters to act with concern for violence against men.

The biblical story of the massacre at Shechem shows the deep roots of contempt for men’s lives. In that story, the young woman Dinah went, apparently by herself, to visit with the women of the tribe of Shechem.[2] Today, that’s like a scantily dressed woman walking alone through a high-crime area at midnight on a Friday night. All well-educated persons know that every woman has the right to do that. But few consider that such action tends to increase the job hazards of police officers, who are predominately men. Men suffer fourteen times more occupational fatalities than women do. Men suffer four times more deaths from violence than women do. Everyone, including women, should act with loving concern to lessen violence against men.

Dinah visiting the woman of Shechem was a critical link in a chain of events resulting in massacre of all the males of Shechem. When Shechem, the prince of the region, saw Dinah, he fell in love with her. Dinah and Shechem had sex during the time of Dinah’s visit to the women of Shechem. The Hebrew text doesn’t actually indicate that Shechem raped Dinah.[3] Consistent with the sordid history of criminalizing men from the “rape of Lucretia” to recent rape hoaxes, the Latin text of the Vulgate Bible presumed that Shechem raped Dinah. Many modern biblical translations, as well as most biblical commentators, have similarly promoted rape-culture culture.

Horrific violence resulted from the allegation of rape. After he allegedly raped Dinah, Shechem pleaded with Dinah’s father and brothers to allow him to marry Dinah. Dinah’s brothers deceitfully promised to allow that marriage if the men of Shechem had themselves circumcised. Evidently Dinah herself didn’t object to marrying Shechem. Desperately in love with Dinah, Shechem induced all the men of Shechem to be circumcised. While the men were suffering from the pain of male genital mutilation. Dinah’s brothers massacred all the men of Shechem. That killing in turn put Dinah’s family at risk of retaliatory violence against men from the friends of Shechem.

In medieval Europe, Geoffrey de la Tour Landry wanted his daughters to be among enlightened persons who act with concern for violence against men. Characterizing Dinah going among the tribe of Shechem as being frivolous and light-hearted, Geoffrey urged his daughters:

Look on this example and see how many evils and misfortunes are caused by foolish women. Because of her youth and her frivolous spirits, a great deal of blood was shed. [4]

Underscoring the lesson of the biblical story of the massacre at Shechem, Geffrey appended to it a story about more than a thousand Greek men killed.

According to that story, a Greek king had a daughter. Her fole amour (“foolish love”) for an earl caused a horrendous war in which more than a thousand men were killed. A wise man came to the king and said it would have been better if his daughter had never been born. The king ordered his own daughter cut into pieces just as more than a thousand men had been from her lack of concern for violence against men. If you want to understand violence against women, you must seek to understand much more prevalent violence against men.

The story of more than a thousand Greek men killed parallels in its ending the biblical story of about a hundred thousand Israelite and Benjaminite men killed. In the later story, a Levite resided in a remote area of Ephraim with his concubine.[5] She became angry with him and left him to live with her father. The Levite, rather than acquiring another concubine, sought to speak tenderly to her and convince her to come back to live with him. The Levite thus undertook the long journey to his concubine’s father’s house. The concubine’s father greeted the Levite with joy and offered him much food and drink. Evidently the concubine’s father regarded the Levite as a worthy companion for his daughter. She apparently agreed to return to live with the Levite.

The ultimate results of the concubine leaving the Levite were horrific killings. On the way home, the Levite and his concubine desperately needed a place to stay for a night. A man from Ephraim generously hosted the Levite and his concubine. Unfortunately, at night a crowd of Benjaminite men gathered and demanded that they be given the Levite to rape. Men traditionally have shown their love for others by being willing to die for them. In this story, the Levite had his concubine accept sexual abuse for him. The Benjaminites gang-raped her all night long. In the morning, she was dead. The Levite, outraged, sought vengeance. Her hacked her dead body into twelve pieces and sent a piece to each of the twelve tribes of Israel. Violence against women, even just unsubstantiated claims of violence against a woman, is a powerfully tool to incite men to violence against men. The resulting war between the Israelites and the Benjaminites killed about 100,000 men. In addition, nearly all the inhabitants of the Benjaminite city of Gibeah were killed.

Geoffrey de la Tour Landry used the biblical story of about a hundred thousand Israelite and Benjaminite men killed to instruct his daughters to restrain their responses in anger against their husbands over minor matters. Geoffrey’s version of the story emphasizes that the Levite was a good, noble man, the woman was his wife, and her anger arose from a relatively unimportant matter. Close personal relationships inevitably involve some annoyances and anger. In this story, the wife left her husband over a minor matter. In Geoffrey’s telling of the story, the wife’s father told her that she had done wrong and should return to her husband. Geoffrey explicitly noted that the wife leaving her husband over a minor matter resulted in about thirty-three thousand persons being killed. Geoffrey instructed his daughters:

This is a good example for you of how a woman ought not to leave her husband and household-head for any anger or ill-will between them. [6]

Given the way current domestic-violence laws gender-profile men for arrest and destroy men’s lives without any due process of law, caring women today should be even more careful to restrain their anger against their husbands for minor matters.

God exalts always the just and those truly loyal, and the false queen {who made a false accusation of rape} was punished. Within a little time afterwards, she died wickedly and suddenly of an evil death. And in this way God rewarded each of them after their merit. [7]

A false accusation of rape can cause a man to be imprisoned for many years. Prisons are violent places. Imprisonment itself is an act of violence that isn’t justified under a false charge. Fathers and mothers who care about violence against men should teach their children not to make false accusations of rape.

In our benighted times, caring persons can find better moral guidance in medieval literature than in much of today’s academic scholarship and public-affairs writing. Despite its prevalence, violence against men is scarcely recognized as such. The medieval knight Geoffrey de la Tour Landry knew personally horrendous violence against men. His fatherly instruction to his daughters about violence against men deserves to be taken seriously and studied carefully.

[1] For the scant biographical information on Geoffrey de la Tour Landry, Wright (1906) Introduction, Offord (1971) pp. xxxiv-xxxviii, and Barnhouse (2006) pp. 3-5. Geoffrey had at least three daughters with his wife Jeanne de Rouge and at least one son. Their son Charles died on St. Chrispin’s Day fighting in the battle of Agincourt in 1415. They may have had another son who also served as a soldier. Geoffrey addressed his book to his three daughters: Jeanne, Anne, and Marie.

[2] For the story, Genesis 34. Shechem is also commonly spelled Sechem.

[3] A thorough evaluation of the linguistic evidence concluded:

The widespread opinion that the verb ‘innâ in the Pi’el {story of the massacre at Shechem} refers to “rape” or “sexual abuse” is not acceptable. It suffers from a lack of analysis of all the biblical material and of the distribution of ‘innâ with a female object in the Hebrew Bible. … ‘innâ in Gen. xxxiv 2 does not describe Shechem’s rape or sexual abuse of Dinah, but evaluates Shechem’s previously described actions (“take” and “sleep with”) as a debasement of Dinah from a social-juridical point of view.

Wolde (2002) pp. 543-4. Bechtel (1994) provides a historical contextualization of the story while setting out a “modern definition of rape” that precludes men being raped. Id. p. 20. Actions today are labeled rape with grotesque anti-men prejudice.

[7] Geoffrey de La Tour Landry, Le livre du chevalier Ch. 58 (Of the wife of the Pharaoh and Joseph the son of Jacob), from Old French my translation. For Caxton’s translation, Offord (1971) p. 84. Geoffrey conflates Pharaoh and his vizier Potiphar, and thus makes Potiphar’s wife the Pharaoh’s wife (the queen). For the biblical story, Genesis 39:1-20.

In this book we have dealt with disturbing biblical stories, but we have also observed that the interpretations {emphasis in original} of these stories are frequently more troubling than the stories themselves. We have seen that the history of scriptural interpretation includes blind spots, glaring inconsistencies, and outrageous claims on the one hand, and empathy, insight, and compassion on the other. Perhaps this exploration of the stories of Dinah, Tamar, the Levite’s concubine, Susanna, the martyrs of the church, and others will help us become aware of our own interpretive blind spots. The lessons of history may teach us the importance of using reverence and care in approaching both sacred texts and the stories told by victims of violence, listening to the voice of each with ears that hear.

Schroeder (2007) p. 239. Schroeder and many other scholars today appear to be deaf and blind to violence against men and ignorant of the reality of rape.

[image] Edward II counting the dead men on the battlefied of Crécy. Manuscript of Jean Froissart, Chroniques, Vol. 1. Made in Paris, c. 1410. Folio 144r in The Hague, KB, 72 A 25. Thanks to Koninklijke Bibliotheek (National Library of the Netherlands) and Wikimedia Commons.