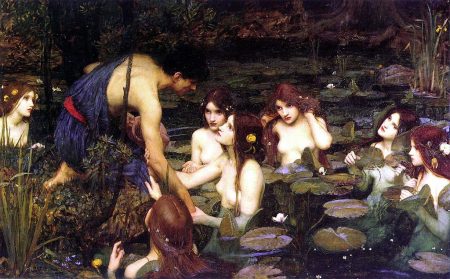 She had a face that launched a thousands ships and caused the deaths of tens of thousands of men. Yet more than two thousand years later, a man dreamed of receiving a sweet kiss from Helen of Troy.[1] Matthew of Vendôme, a learned, twelfth-century cleric, understood that the problem was more than Helen’s beautiful face. Matthew observed in his imagination:

Her sides narrow at her waist, up to the place where
the luscious little belly rises.
The altar of modesty makes festive nearby areas,
friend of Nature and delightful home of Venus.
The sweet taste that lies hidden in Venus’s realm,
a judicious man by touch can prophesy.

As a man, Matthew of Vendôme understood personally Helen’s awesome power to raise up and tear down:

She induces sexual desire; such a one I choose.
He of Vendôme describes such as he loves.
With such a gift did the daughter of Leda wound the Trojans, thus
the abduction by Paris, the burning of Troy, the fall of princes.
If the Greeks ask why the son of Priam abducted Helen,
well, set Hippolytus before her and he would become a Priapus.

Men not being paid for their erection labor is bad enough. Must that labor also exacerbate the terrible problem of violence against men?

The medieval cleric Gerald of Wales described a humane solution to the problem of Helen of Troy. Gerald imagined Nature creating an even more beautiful woman:

Her soft lips are pink, an ivory row decorates her mouth,
her kisses taste of honey, the smell of nectar issues forth.
Ivory teeth, rosy mouth, soft lips, moisture in these
tastes sweetly, her lips pressed with a kiss taste of the honeycomb.
…
The upper hips stand firm, and, with a certain moderation,
extend themselves. The abdomen goes down as far as the pubic region.
Full of modesty, the pudenda lurk in the region of Venus,
well-disposed in worthy service of their nature.
The soft, smooth, milky flesh of the thighs invites
the eyes; milky whiteness, firmness, and softness invite the hands.

Appreciating this other woman, Gerald of Wales declared:

If just once the eyes of Paris had seen her, Troy would
still be standing, and Helen would not have meant so much to him.

The way to solve a problem like Helen of Troy is to have many, even more beautiful women available and receptive to men.[5] Solon’s wise social-welfare program for men probably wouldn’t be enough to end war. Government policy should also encourage women to lose weight, exercise, and remediate surly dispositions. Give peace a chance!

Was this the face that launched a thousand ships
And burnt the topless towers of Ilium?
Sweet Helen, make me immortal with a kiss.
Her lips suck forth my soul; see where it flies! —
Come, Helen, come, give me my soul again.
Here will I dwell, for Heaven is in these lips,
And all is dross that is not Helena.

[2] Matthew of Vendôme, Ars Versificatoria (The Art of the Versemaker) I.57, from Latin my translation, adapted from Parr (1981) p. 38 and Gallo (1974) p. 70. The Latin text is from Faral (1924) p. 130. Bourgain (1879) provides a lower-quality text, but one freely available online. Matthew is thought to have written Ars Versificatoria between 1150 and 1175 in France. The description is from head to toe (effictio). The verses above describe moving down from the upper waist.

In Ars Versificatoria 1.58, Matthew describes an ugly woman (Est Beroe rerum scabies). Boccaccio may have drawn upon that description in writing his under-appreciated masterpiece, Il Corbaccio.

Epp (1991) highlights Matthew’s liberal use of sexual references. Id., however, shows no understanding of gynocentric society’s repression of men’s sexuality.

Hippolytus became a common figure of male chastity in medieval Europe. For example, the thirteenth-century poem About the Old Woman {De vetula} told of an exceptionally beautiful woman:

Thus in the whole earth surrounded by the ocean,
there was no supreme beauty like hers.

Her appearance would have moved
Hippolytus, unless he wished to destroy his own eyes.

Gerald of Wales was no pedastalizer. He recognize women’s well-developed guile and power to incite deadly violence against men:

Since woman is always adapting and responding to circumstances, she made herself booty of the plunderer by her own contrivance. As Mark Anthony and Troy are witnesses, almost all the greatest evils in the world have arisen from women.

[5] Medieval commentary on Constantine’s Viaticum described having sex with many women as a cure for a man suffering from lovesickness. Healthy men, however, highly value quality in women.

26 thoughts on “how do you solve a problem like Helen of Troy?”