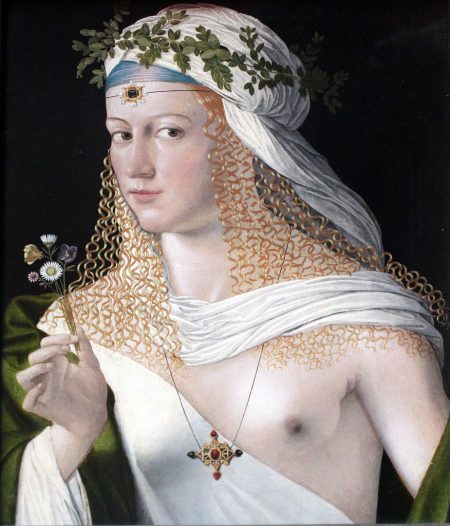 One poem in Pontano’s Baiae playfully explores the focus of the man poet’s attention. Consider:

Luna shined with new elegance,
and radiance streamed from her naked breasts;
from out of the blessed one’s dewy hollow
exhaled a breeze of rosy liquor,
from whose tender lips flowed down
Ambrosian essence dropwise liquefied.

Luna is a young woman lying on a bed beside a pool in the cool shade. The first focus is Luna’s naked breasts. Since it’s associated with a rose metaphor, the dewy hollow most likely is Luna’s vagina. A straight-forward reading of the third couplet shifts attention upwards, over Luna’s breasts, to her mouth. The second two couplets bodily bracket the radiance streaming from her naked breasts. Ovid long ago knew the rest:

she plays in the way of Venus in the wrestling arena,
and then sleeps with you, quietly and peacefully.

One might complain that the metaphor of wrestling brutalizes men’s sexuality. But at least their intercourse ends peacefully.

Sexual harassment, in contrast, can create a hostile environment for men. Under current U.S. sexual harassment law, intentions don’t matter. Only persons’ experienced feelings are relevant. The man poet spoke out about the discomfort he felt in encountering a topless woman:

I’m telling you to clothe those shining breasts,
desist from stirring the insanity of lovers.
I’m congealed already by cold, old age;
you’re improperly and wrongly heating me up. Hence
I’m telling you to clothe those shining breasts
and veil your bosom with a decent bikini-top.
For why do you your milky chest, and your very
breasts, in front of you carry, unclothed?
Do you wish to say, “Kiss these breasts,
and caress this glowing bosom”?
Thus are you saying, “Touch, touch, stroke them”?
Do you go out with naked breasts?
Do you expose your bosom to stroll around?

The young woman perpetrating sexual harassment with her naked breasts was none other than Hermione, the daughter of Menelaus and Helen of Troy. With her bodily beauty, Helen of Troy had prompted the deaths of many men in the Trojan War. Helen’s daughter Hermione apparently learned nothing from her mother about the effects of young, beautiful women on men. Women’s sexual harassment of men should be taken seriously. Too often it isn’t. 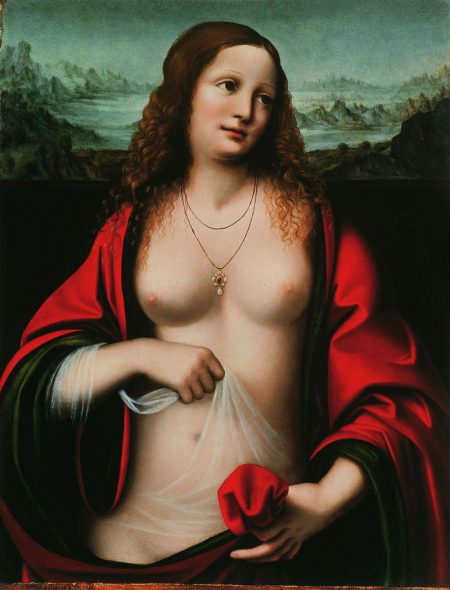 In Pontano’s Baiae, breasts seem to be the most powerful attribute with which women sexually harass men. Nearly every poem admiring a woman praises her breasts. Among the poetic lines in which breasts appear are these:

Almost all men typically love nearly all women. The man poet Giovanni Pontano writing in late-fifteenth-century Italy particularly loved young women’s breasts. Despite frequently describing naked women and sex with women, he only rarely and vaguely alludes to women’s vaginas. Perhaps he regarded women’s vaginas as too awesome to describe. The poet also never mentioned women’s buttocks. Perhaps that was a matter of aesthetic preference. Not all men suffer sexual harassment by women in exactly the same way.[4]

The Baiae commonly uses sinus in its meaning “bosom.” But sinus also means “hollow” or “cavity.” Here that could refer to Luna’s mouth, but vagina seems to me a better interpretation.

[2] Pontano, Baiae “To Hermione, to Cover Her Breasts {Ad Hermionen, ut papillas contegat},” Latin text from Dennis (2006) p. 12, my English translation, benefiting considerably from that of id. In Baiae 2.7, “To Focilla, to Restrain her Eyes {Ad Focillam de cohibendis ocellis},” the poet protests Focilla sexually harassing him with the female gaze. But in the Baiae, the female gaze sexually harasses men much less frequently than does a young woman’s breasts.

In the above list I consistently translate papilla, sinus, and pectus as breast, bosom, and chest, respectively. Dennis translated those terms with similar sense, but not with strict, formal consistency.

In the Baiae and in medieval Europe generally, bigger breasts didn’t make a woman more attractive to men. In praising a woman’s appearance, a twelfth-century Ovidian cento declared:

The shape of her nipple were nowhere apparent,
either because they were too small or they were bound.
Young women often compress their breasts with girdles,
for breasts that are too full are displeasing to men.
But this young woman isn’t among those such women:
her breast were without doubt sufficiently small.

[4] Of course men’s interests aren’t necessarily limited to one part of a woman. A poem from the Carmina Burana (early thirteenth century) highlights breasts and lips:

When I caught sight of her breasts,
I longed to slip my hands in,
to play with her flawless mammas.
So thinking I felt sexually aroused.
Sitting on her lips
was the rose of modesty.
I was pulsing with love
to kiss her mouth,
ah kiss, ah kiss, ah kiss,
sensuously sealing her lips with mine.

Men, even at the same time and place, find many different attributes of women beautiful. Like most men, Greeks in the time of Homer admired the full range of a woman’s physical being: from a woman with beautiful hair {καλλίκομος, Iliad 9.449} to a woman with beautiful ankles {καλλίσφυρος, Iliad 9.557}. What men admire in women depends partly on what men see and what men experience. Comparative literary study of men admiring women’s beauty is much less developed than scholarly work scrutinizing literature for the purpose of charging long-dead men authors with misogyny.

[images] (1) Portrait of courtesan Flora of literary imagination; person attributed to be Lucrezia Borgia. Painting made by Bartolomeo Veneto in Italy in c. 1520. Preserved under accession number 1077 in Städel Museum (Frankfurt, Germany). Via Wikimedia Commons. (2) Mary Magdalene with naked breasts. Painting made in the Lombard School in northern Italy, c. 1515. Contested attribution between Giampetrino and Leonardo da Vinci. Preserved in private collection in Switzerland. Image via Wikimedia Commons.

Kretschmer, Marek Thue. 2013. “The Elegiac Love Poems Versus Eporedienses and De Tribus Puellis and the Ovidian Backdrop.” The Journal of Medieval Latin. 23: 35-47.