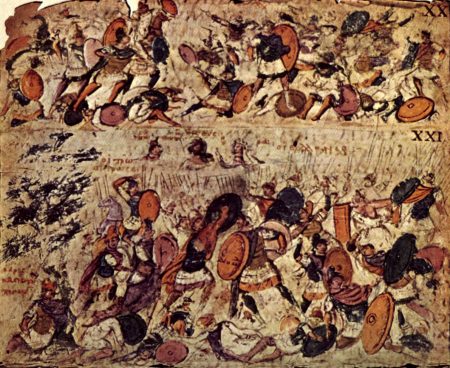 Prince Paris, who had eloped with Helen of Troy, hung back from entering the terrible, man-on-man violence of the Trojan War. Paris lingered in his bedroom with Helen. His brother Hector berated him:

What on earth are you doing? Oh how wrong it is,
this anger you keep smoldering in your heart! Look,
your people dying around the city, the steep walls,
dying in arms — and all for you, the battle cries
and the fighting flaring up around the citadel.
You’d be the first to lash out at another — anywhere —
you saw hanging back from this, this hateful war.
Up with you —
before all Troy is torched to cinder here and now! [1]

Paris explained that Helen had been urging him to battle. He said he would soon join the fighting. Helen in turn lamented to Hector:

My dear brother,
dear to me, bitch that I am, vicious, scheming —
horror to freeze the heart! Oh how I wish
that first day my mother brought me into the light
some black whirlwind had rushed me out to the mountains
or into the surf where the roaring breakers crash and drag
and the waves had swept me off before all this had happened! [2]

Helen spoke with acute personal and political insight. In an account of the Trojan War written about the fifth century GC, Dares Phrygius recounted Achilles’s protest against the war:

Thereupon Achilles complained, to any and everyone, that for the sake of one woman, that is, Helen, all Europe and Greece were in arms, and now, for a very long time, thousands of men had been dying. … A lasting peace – that was the need. For the sake of one woman, he said, the Greeks were risking their lives, endangering their freedom, and wasting a great deal of time. Thus Achilles demanded peace, and refused to reenter the fighting. … The number of Greeks who fell, according to the Journal that Dares wrote, was 866,000 {men}; the number of the Trojans, 676,000 {men}. [3]

Even given long-prevailing lack of concern for men’s lives, the colossal waste of men’s lives in the Trojan War is astonishing. What was the fundamental cause of the Trojan War? Why are men’s lives so socially devalued? What can be done today to ensure that a disaster like the Trojan War never occurs again? Guido delle Colonne’s thirteenth-century Latin work, Historia Destructionis Troiae, provides key insight into these vitally important questions.

a much talked-about rumor, which acquired great force as it went along, was spread about the neighboring regions. The rumor concerned the beauty of Paris as he entered the temple {of Cythera / Venus}. It reached the ears of Helen by many reports. After Helen had learned of this, the eager appetite of changing desire, which commonly seizes women’s hearts with sudden lightness, excited Helen’s heart with an ill-advised passion, so that she wished to go to the ceremonies of this festival in order to see the festive celebrations and to look at the leader of the Phrygian nation {Paris}. … Helen, loveliest of women, what spirit seized you so that in the absence of your husband you left your palace on such a frivolous account, and went through its gates to look at an unknown man, when you could have easily preserved your modest abstinence within the palace of your kingdom? Oh, how many women the coming and going and readiness to run about to common places bring to ruin! … You, Helen, wished to leave your palace and visit Cythera so that, under the pretext of fulfilling your vows, you might see the foreign man, and under the pretext of what is lawful, turn to what is unlawful. [4]

As is common under gynocentrism, Guido blamed men for seducing women:

oh, how often these kinds of spectacles have led many very shameless women to shameless ruin by the observation and sight of games and pastimes, when young men come and practice their charms and with sudden rapacity seduce the captivated hearts of women from the follies of the celebration to the peril of their honor. Since young men have an easy opportunity to see young girls and others urged very strongly toward worldly trifling, now by their eyes, now by soft speeches of flattery, now by touches of the hand, now by the encouragement of signs, they ensnare the hearts of women who are themselves easily moved by secret sophistries and the pleading of charming lies. [5]

According to Guido, the ultimate cause of tragedies like the Trojan War isn’t women’s strong, independent sexuality, but the “treacherous attacks of men”:

May he {sic} perish who first brought it about that young women and young men they do not know dance together, which is a manifest cause of many disgraceful acts. Furthermore, on account of these dances, many girls who were chaste till that time fall outrageously to the treacherous attacks of men, from which scandals often arise and the deaths of many {men} follow.

Ovid, the master teacher of love, counseled, “The only chaste woman is one who hasn’t been propositioned {Casta est quam nemo rogavit}.”[6] Men are burdened with propositioning women. Yet as Ovid well knew, men are also often required to perform complex and time-consuming strategies of seduction, at the risk of criminal prosecution, in order to have sex with women. Men’s lack of entitlement to sex and men’s sexual deprivation are both social injustices in themselves and fundamental causes of the deaths of many men in unnecessary wars.[7]

Avoiding future disasters like the Trojan War requires improving men’s sexual welfare. The ancient Greek lawmaker Solon wisely established public sexual services for men. Yet King Solomon’s humiliating experience after a rumor circulated that men would allowed to have seven wives points to the difficulty of improving men’s sexual opportunities. Many wives, despite vicious public propaganda disparaging their husbands as rapists, lovingly support a sexual entitlement for their husbands. Yet for broad, public progress, education is key. Colleges and universities should cease absurd, totalitarian oppression of men’s sexuality, encourage students to read ancient and medieval literature with compassion for men, and promote justice and peace.

[1] Homer, Iliad, Bk 6, ll. 384-91, from Greek trans. Fagles (1990) p. 206. The line numbers, which refer to Fagles’s translation, are close to those of the Greek text. Paris initially fled from personal combat with Menelaus, Helen’s husband. In subsequent combat, Aphrodite saved Paris from death at the hands of Menelaus. Paris probably was angry at his fellow Trojans for not appreciating Aphrodite’s sound sense of justice.

[3] Dares Phrygius, De excidio Trojae historia {History of the Fall of Troy} 27, 44, from Latin trans. Frazer (1966). Here’s a Latin text. Cornil (2011) provides less literal, more fluid translations. De excidio Trojae historia was probably written early in the sixth century GC. It was for medieval Europe the principle source on the full history of the Trojan War. Its casualty count shouldn’t be taken as literal truth. That thousands of men died in the Trojan War is undoubtedly true.

[4] Guido delle Colonne, Historia Destructionis Troiae {History of the Destruction of Troy} Bk. 7, from Latin trans. Meek (1974) pp. 68-9. The Latin text is from Griffin (1936), p. 70 (available online). In this and subsequent quotations, I’ve made insubstantial changes in Meek’s translation to improve its readability.

Guido’s work is a close Latin prose paraphrase of Benoit de Sainte-Maure’s Roman de Troie. Benoit wrote the latter in French probably between 1155 and 1160. Guido claims to have followed Dares’s De excidio Trojae historia and Dictys Cretensis, Ephemeridos belli Troiani libri. The later was a Latin text dating from the fourth century. In medieval Europe, Ephemeridos belli Troiani libri was thought to represent a soldier’s diary from the time of the Trojan War.

Historia Destructionis Troiae was the most influential history of the Trojan War in the European Middle Ages. Guido’s work survives in over 150 manuscripts. Eight editions of it were printed from 1473 to 1494. It was translated into Bohemian, English, Flemish, French, Italian and German before the eighteenth century. Meek (1974) p. xi; Benson (1980) pp. 1-10. On the influence of Historia Destructionis Troiae, Benson (1980), Simpson (1998), and Heavey (2008).

Oh, how pleasing to women should be the walls of their homes, how pleasing the limits and restraints of their honor! For an unrigged ship would never know shipwreck if it stayed continually in port and did not sail to foreign parts.

Bk. 7, trans. Meek (1974) p. 69. In a humane society that provided for men’s sexual and reproductive welfare, such restrictions on women’s liberty would hardly be an issue.

The story of the Trojan War circulated in medieval Europe in two streams. The first stream, in the prophetic mode of Virgil’s Aeneid, provided a subtle — too subtle — critique of gynocentrism. Guido’s factual, surface history, Historia Destructionis Troiae, was a second stream. Like Simpson (1980), Historia Destructionis Troiae shows no critical self-consciousness of men’s real social position.

[image]  Men fighting and dying in battle, scenes based on Iliad, Book 5. From the Ambrosian Iliad (Ilias Ambrosiana), thought to have been produced in Constantinople in the fifth century. Thanks to Wikimedia Commons.