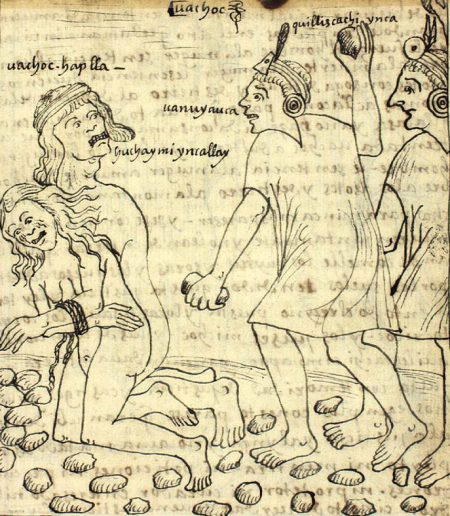 After Hysmine sexually harassed Hysminias, he dreamed of having sex with her. His dream included a nightmare, every man’s nightmare, but with a distinctive signifier. While amorously entangled with her:

the girl’s mother arrives and, grasping the girl by the hair, drags her off like loot from war-spoils, yelling vituperations and slapping her. I was absolutely thunderstruck, as though I had been blasted by lightening. But that most aggressive of the dreams did not let me remain senseless and turned Panthia’s {her mother’s} tongue into a Tyrrhenian trumpet {a war trumpet} which brayed out against me and she cursed my herald’s wand.

Few men have that particular long, hard tool. Hysminias came to Hysmine’s home city of Aulikomis as a herald. Being selected as herald was a great honor. The herald represented a chaste, virtuous, godly young man. Hysminias was such a man before he fell in love with Hysmine.

In Hysminias’s dream, Hysmine’s mother accused him of engaging in theater. She chided him:

“Alas for your theatricals,” she said, “and your play-acting, Zeus and the gods! The herald, the chaste youth who was crowned with laurel, who brought the Diasia to Aulikomis, who was welcomed among us and cherished like a god — he is a fornicator, unregenerate, a rapist, he has come to Aulikomis as a second Paris; he ravages my treasure, he robs me of my heirloom. But I have got you, you thief, robber, sinner, despoiler of what is most beautiful. All you mothers who conceal your virgin treasures and keep sleepless watch over your treasures, look, I have the traitor who was masked by the laurel crown, the august chiton, the sacred sandal and his office — he put them all on like a lion skin, he invented the whole play.”

“Women, let us weave a coat of stone for the despot, let us paint his scenery for him, let us perfect the performance, let us publicly emblazon the despot in his tunic so that our actions are an ornament for women, a bulwark for virgins, and a crown for Aulikomis.

Did not women destroy the children of Egyptos
and empty Lemnos of males?

Were not Polymestor’s eyes gouged out by women?”

She said this and instigated an army of women to action and succumbed entirely to a Bacchic frenzy and launched a campaign against my head; I was transfixed by the sight and said to {my close friend} Kratisthenes, “I am done for, Kratisthenes!”

Kratisthenes jumped out of bed, roused Hysminias from his dream, and so rescued him. But the damage violent mothers do to men’s active minds and loving hearts is not so easily healed.

In reality, Hysmine’s mother blamed and disparaged Hysminias for her daughter’s affair with him. Hysmine and Hysminias consensually fled from their homes to avoid Hysmine being married to another. Her mother bewailed her loss:

Like a fully fledged bird you have flown away and you have fluttered from these pitiable hands of mine. … That was no herald but a savage beast, who snatched my Hysmine from these pitiable hands and from my very embrace, and ravaged all my treasure, harvested the corn, culled the grape and plucked the rose. Garlanded, the beast came to Aulikomis, but departed leaving my head unadorned, having taken my garland; he played the chaste youth and secretly made off with my maiden. … that tyrant, that audacious youth, who mocked his office of herald, and played it false, has ravaged your virginity. O dread and untimely fate, O my misfortune, O protector that failed to protect, O treacherous beast that stole by stealth and abducted by force!

Hysminias didn’t abduct Hysmine by force. He also hadn’t had sex with her. But whether it’s a mother making an offering to the god Apollo to recover her maiden daughter or men arraigned before college sex crime tribunals, facts matter little. Hysmine’s mother “wailed heartrendingly and most pitiably.” That’s a signal in gynocentric society to arrest and punish a man, irrespective of the facts. Illicit love under gynocentrism is almost always regarded as men’s fault.

Men’s nightmares of being persecuted merely for consensually loving a woman are tragically rooted in reality. The twelfth-century Byzantine novel Hysmine and Hysminias resonates with poignant relevance to men today.

5 thoughts on “Hysminias loving Hysmine spurred her mother to violence”