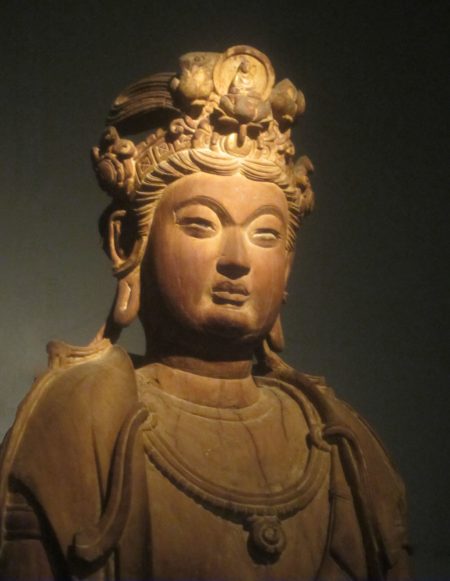 In Chrétien de Troyes’s late-twelfth-century Arthurian romance Cligès, Empress Fenice represents a saint in the Latin tradition of Saint Marina. Other motifs and structures in Cligès apparently came from Latin literature connecting to Byzantium and the Islamic world. Although Chrétien wrote Cligès in the vernacular (French), he built Cligès upon the broad scope of medieval Latin literature.

Cligès explicitly describes Empress Fenice as a saint. When Fenice apparently died, persons all around the city of Constantinople wept and lamented that Death had killed “the best, most saintly woman”. She was “someone better / Than best, better than them all.” The craftsman John built a magnificent tomb intended to hold “the remains of some holy saint.” John told the Emperor that Empress Fenice could be buried in that tomb:

By placing her body there,
Surely it would hold a saint. [1]

We’ll bury her body with those
Of the other saints, in front of
Saint Peter’s holy cathedral.

Fenice was thus positioned as a saint to be venerated for her holiness.

Fenice’s death was a deception that she designed to enable her to live with her lover Cligès. A woman cuckolding her husband wasn’t regarded as a saintly in the Middle Ages. Yet Cligès is more than a romance featuring a false saint and a duped populace.

Fenice experienced torture like that which martyr-saints suffered. While in her potion-induced death-like state, Fenice was slapped, hit, and kicked. She was whipped on her bare back. Blood ran freely from the lines cut into her flesh. Molten lead was then poured onto her palms. Finally her entire body was to be roasted on a grill.[2]

Three “wizened doctors” from Salerno administered these tortures. Salerno was where, late in the eleventh century, Constantine the African had translated Arabic medical texts into Latin. The most learned doctor of the three began the treatment of Fenice by placing his hand on her chest. That suggests sexual healing like the young medical student applied to a beautiful woman’s corpse in the Latin Apollonius of Tyre. The literature of Christian martyrdom, Salerno, and sexual healing all point to Latin literature.

Moreover, the Latin Solomon and Marcolf seems to have informed two aspects of the story about the torturing doctors. Cligès states:

These clever doctors remembered
Solomon’s wife, who hated
Her husband so much she pretended
Death to deceive him.

The story of Solomon’s wife faking death to deceive her husband is part of the Solomon and Marcolf tradition.[3] Just as in Solomon and Marcolf, a mob of women storming the nominal center of ruling power pushes the story in Cligès forward:

Women poured through the palace
Door like a charging army

Acting without respect to formal political authority, the women administered “natural” punishment to the doctors for torturing Fenice. The women gave:

The three doctors what they’d asked for,
Not waiting for the emperor to return
Or any of his stewards. They threw
the doctors through the open
Windows, down to the courtyard
Below, where all three died,
The necks broken, and their ribs,
Their arms, and their legs. No woman’s
Work was ever better
Done! The three doctors
Had earned the wages they’d gotten,
And the mob of women had paid them.

The literary scope of Cligès has tended to be under-appreciated. A romance written in French and infused with Frankish customs, Cligès also has strong Byzantine elements. A large section of its plot is set in Constantinople, with emperors, empresses, eunuchs, and court intrigue. The double-romance structure of Cligès is the same as that of the slightly earlier twelfth-century Byzantine novels. Fear that subsequent Byzantine empresses would emulate Fenice might relate to a peculiar passage in the Byzantine novel Rhodanthe and Dosikles. A medieval scholar has suggested that Chrétien used as a source “a Byzantinized version of the Persian tale of Vis and Ramin.”[5] Such a broad literary scope is consistent with Cligès’s use of Solomon and Marcolf. Just as with Solomon and Marcolf, Latin literature is the most plausible medium connecting Chrétien to literature across western Eurasia.[6]

In sharp contrast to courtly glorification of women, Cligès presents the saintly Empress Fenice as a flesh-and-blood human being. Social appearance, rather than saintly values, largely motive Fenice’s actions. Unlike a saint, Fenice complains of her fleshly suffering as a martyr under the three doctors’ tortures:

I can’t believe I’m still
Alive: those doctors hurt me.
They beat me and tore at my flesh.

The saintly, adulterous Fenice incorporates appreciation for women well-known through the Indian Sukasaptati and the western Eurasian Sindibad / Seven Sages corpus. Fenice points forward to the comedic humanism of Boccaccio’s Corbaccio.[7] Underneath it all, Fenice is a figure of the transgressive and subversive humanism and cosmopolitanism of medieval Latin literature.

Love had committed no crime,
joining these two together,
For when they lay in each other’s
Arms, hugging and kissing,
Their joy, their pleasure, seemed
To make the world a better
Place. Can one ask for more?

[2] Cf. e.g. the martyrdom of Saint Juliana of Nicomedia.

Agipitos presents a rather different view. “Needless to say, no Medievalist ever saw the Byzantine color of the Cligès as an indication of the text’s ‘Byzantine character’.” Agapitos (2010) p. 161. What would constitute “Byzantine character” is unclear. More generally, Agapitos sees only a late, narrow channel for interaction between medieval Greek and Latin literature:

If examined dispassionately and with due consideration for the available evidence, the only time where some form of cultural osmosis between the Greeks and Latins could take place under Byzantine administration was the Laskarid empire of Nicaea after its stabilization and the first six decades of the Palaiologan government in Constantinople, in other words the hundred years between 1220 and 1320.

Agapitos (2012) p. 331. This view seems to me to greatly under-estimate the extent of cultural osmosis.

Where, before Chrétien’s works, we do find more than episodic or incipient fiction, informing the whole structure and permitting invention without ties to historicity, is in such medieval Latin epics as Ecbasis Captivi and Ruodlieb (to these Ysengrimus could possibly be added). However few these ‘forerunners’ may be, they suggest that here, too, Latin literature, although soon to be overtaken by the vernacular, was still in the lead. … In acting as a bridge between Latin and the vernacular, the French poet {Chrétien de Troyes} was performing one of the culturally most important tasks of the cleric at the court of the lay aristocracy.

Green (2012) p. 61. The cleric not only bridged Latin and the vernacular, but also cultures separated spatially by long distances.

there is a balance of probability that Boccaccio really was acquainted with aspects of Byzantine and ancient Greek fiction through the mediation of contemporaries active in the Frankish-controlled regions of Greece and the Levant.

[image] Photo of a wooden figure of the Bodhisattva Guanyin. China, Song Period (960-1279 GC). Item 54-6-6 in the Penn Museum (University of Philadelphia, PA). Photo by Douglas Galbi. I’ve modified the image to remove some background clutter.

Agapitos, Panagiotis A. 2012. “In Rhomaian, Frankish and Persian Lands: Fiction and Fictionality in Byzantium and Beyond.” Pp. 235-367 in Agapitos, Panagiotis A., and Lars Boje Mortensen, eds. Medieval narratives between history and fiction: from the centre to the periphery of Europe, c. 1100-1400. Copenhagen: Museum Tusculanum Press.

Beaton, Roderick. 2013. “Boccaccio and the Greek World of his Time: A Missing Link in the ‘True Story of the Novel.'” Pp. 212-20 in Brownlee, Marina Scordilis, and Dimitri Gondicas, eds. Renaissance encounters: Greek East and Latin West. Leiden: Brill.

Green, Dennis H. 2012. “The Rise of Medieval Fiction in the Twelfth Century.” Pp. 49-61 in in Agapitos, Panagiotis A., and Lars Boje Mortensen, eds. Medieval narratives between history and fiction: from the centre to the periphery of Europe, c. 1100-1400. Copenhagen: Museum Tusculanum Press.