In Sukasaptati, a merchant went on a business trip.  He left his wife Prabhavati alone at home.  At the urging of her women friends, Prabhavati prepared to have an adulterous affair.  A male parrot that her husband had received as a gift spoke to Prabhavati about her planned adulterous tryst:

This is fine and merits doing.  But it is not easy for women of good families.  Moreover, it is considered disreputable.  Go if you have the wits to handle any problems which may arise.  Otherwise you will be in for trouble. [2]

The parrot then quoted a verse:

The wicked merely watch the fun
when problems arise.
Like the starving lady did
as another pulled the merchant’s hair.

Prabhavati was confused and intrigued.  “What does this mean?” she asked.  The parrot, with the insouciance of an alpha male, brushed her off:

Go to your lover, my beauty.  Afterwards you can listen to this long story if your pretty eyes are still interested.

Filled with curiosity, Prabhavati stayed to listen to the story.  Every night for the next seventy days, the parrot similarly induced Prabhavati to change her plans for an adulterous tryst and instead stay home and listen to the parrot’s story. 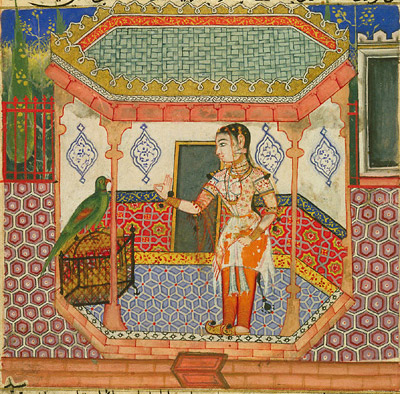 The parrot’s stories, like Old French fabliaux, provide a view of ordinary persons’ lives.  Consider, for example, the story on the eleventh evening.  The parrot’s guile provides the frame for his telling of the story:

The charming Prabhavati continued to be distracted by thoughts of love.  “I will go {to a lover} if you agree,” she said to the parrot respectfully, the next evening.

“You should certainly go,” the parrot replied.  “That is my definite view, for who can prevent the mind from seeking what it wants and water from flowing downwards.  But if you go you must be prepared to do something out of the ordinary, as Rambhika did in times past for the sake of the Brahmin.” [3]

Prabhavati then remained at home to listen to the story about Rambhika.  Rambhika was the wife of a village headman.  She sought adulterous affairs, but no other men would have sex with her because they feared her husband. One day, she saw a handsome young Brahmin who was visiting the village.  She lovingly looked at the young Brahmin.  The text here provides relevant poetic commentary:

Rolling the pelvis, and looking at you
repeatedly with a lovelorn gaze:
you simple boy, what has she not
already told you thus?

The man who cannot comprehend
the heart’s desire long conveyed
through a women’s eyes: what can
explaining do for such a fool?

For it is very hard to find
a girl devoted to one’s parents;
and men who have the same devotion
should take pleasure in that girl.

As if that claim wasn’t convincing enough, Rambhika then declared that if a woman solicits a man for sex and he refuses her, “stricken by her sighs, he will / for certain be consigned to hell.”  The young Brahmin refused to violate his moral code.  Rambhika then cried out with a false accusation of rape: “Help! Help! I am being raped!”  Her husband and his relatives came running to attack violently the accused man.  The Brahmin recognized his dire predicament:

The terrified Brahmin bowed down and fell at Rambhika’s feet.  “Mistress!” he cried, “save my life! I will do whatever you wish.”

She slopped some milk and rice under the bed and quickly lit a fire nearby. “He has cholera!” she told her husband who had just come in, “that is why I screamed.” She pointed out the mess of milk and rice to her foolish spouse, who looked at it and went out again.

Rambhika then had sex with the young Brahmin.  They continued their affair throughout the month that he remained at her home on the pretext of his convalescence.

The parrot told such stories for seventy nights and kept Prabhavati at home while her merchant husband was away.  When her husband returned, Prabhavati lovingly welcomed him.  The parrot recited softly:

Attachment to women is futile,
and futile too is the conceit
that “she will always love me,
and will be my beloved for ever.” [4]

The husband ignored the parrot’s words. Academic inquisitors time-traveling back from 21st-century America to ancient India declared that the parrot is misogynist, insisted that he be silenced, or preferably, killed, and deplored any discussion of paternity deception.  The parrot laughed and said:

One who heeds the words said for his benefit, and acts upon them, earns merit both in this and the next world.

The parrot repeated this again and again until finally the husband asked the parrot for an explanation. Then Prabhavati confessed:

when you went away, for some time I could bear being separated from you.  But then I fell into bad company, and wanted to take a lover.  I nearly killed the mynah {a type of bird} which tried to stop me, but then this parrot held me back for seventy days with his flow of words.  Thus I sinned only in thought, but never by deed.  Now my life and death are in your hands.

The parrot declared that situation arose naturally from a wife being left alone.  The parrot urged the husband to forgive his wife.  The husband did.  They all lived happily ever after.

[1] Sukasaptati (Shuka Saptati) is constructed from the Sanskrit words shuka (parrot) and saptati (seventy).  The earliest surviving Sukasaptati manuscript is from the fifteenth century.  A reference to Sukasaptati exists in late-twelfth-century literature.  It may go back to the sixth century.  Haksar (2009) intro. pp. xv, xvii-xviii.  With its episodic tales united by common characters and interspersed verse, Sukasaptati is formally similar to Arabic/Hebrew maqama.  A Persian adaptation of Sukasaptati, called Tutinama, was made in the fourteenth century.  A lavishly illustrated version of Tutinama was made for Mughal Emperor Akbar in the later half of the sixteenth century.

This bird gives good advice to everyone, and to me especially, has been like a father or brother.

Wortham, B. Hale. 1911. The enchanted parrot; being a selection from the “Suka Saptati,” or, The seventy tales of a parrot. London: Luzac & Co.

One thought on “Sukasaptati: Indian parrot instructs men in guile”