The fourteenth-century Spanish work Libro de buen amor includes the tale of Pitas Payas.  He was a painter in Brittany.  Pitas Payas married a young, beautiful woman, as most men hope to do.

Pitas Payas, like most men then and now, had no choice but to work outside the home to earn money to support his wife.  Being a painter has never been a propitious occupation for earning money.  One month after his marriage, Pitas Payas decided to shift to a less enjoyable, lower status, but potentially more lucrative occupation, that of being a merchant.[1]  He explained to his wife (“my lady”) that he needed to make a business trip to Flanders.  He promised to bring back gifts for her:

And she replied, “My lord, if you must go, then you should start;
But don’t forget our home, and me with my true, loving heart.” [2]

Men believe that their ability to provide material goods makes them worthy of love.[3]  That’s a charming tale.

Nature doesn’t give men the knowledge of personal biological relation to children that nature provides to women.  Pitas Payas, like most men, understood that biological reality.  He was concerned about his wife having sex with another man.  To safeguard his interest in their marriage, he devised an ingenious technological solution.  He asked his wife if he could paint upon her body.  She consented.  Below her navel he painted a guardian lamb.  Then he left on a business trip.

His wife found a lover.  Sex with her lover rubbed off the guardian lamb that Pitas Payas had painted below her navel.  After much difficulties and delay, Pitas Payas relayed to his wife that he was finally coming home.  Her response:

She quickly called her lover, told him what they had to face,
And ordered him to paint on her, as well as he could trace,
A little baby lamb, and on that selfsame place.

Her lover, working quickly from his own understanding, painted a fully grown ram with horns and a protruding penis. 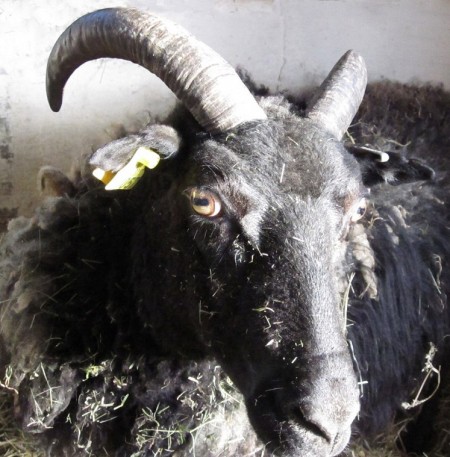 When Pitas Payas returned from his long business trip, his wife received him coldly and disdainfully.  Pitas Payas asked to see the lamb that he had painted.  His wife taunted him:

“My lord,” she said, “look for yourself, if you are equal to it,
And anything you wish to do, be bold enough to do it.”

As any woman always is, when caught in such a jam,
Both shrewd and full of guile, she said, “My lord, what do you mean?
Would not a lamb, within two years, have grown into a ram?
If you had come back earlier, you would have found a lamb.” [4]

In Libro de buen amor, Don Amor uses the tale of Pitas Payas to urge upon the Archpriest of Hita chivalry as understood in the early Arabic life of Buddha.  Medieval Spanish culture, however, lost that ideal to a much more brutal, man-degrading understanding of chivalry.  The historical conditions of chivalry are a crucial framework for understanding the medieval Spanish fiction Libro de buen amor.[5]

While the lost ideal of chivalry is a crucial framework, the tale of Pitas Payas particularly concerns the social and biological reality of paternity.  Cuckolded husbands are common figures of ridicule in medieval literature.  That double punishment parallels the charivari punishment of husbands beaten by their wives.  The social basis for these otherwise puzzling social phenomena is apparent in leading literary analysis of the tale of Pitas Payas.  According to this scholarly work, Pitas Payas abandoned his wife.  Moreover,“she takes a lover because of the physical laws of feminine necessity,” that is, “a woman’s natural needs.”[6]  The analysis gets even more insightful:

Pitas Payas thought that painting would protect him from cuckoldry.  He failed to understand the much greater force of social justification and social punishment.

In the U.S. today, millions of children have false beliefs about who their biological father is.  DNA paternity testing could easily eliminate much ignorance and false belief about paternity.  However, it isn’t even used as a prerequisite to the government forcing financial fatherhood on men.  The problem isn’t lack of technology.  It’s men’s lack of social power.  Men lack sufficient social power to gain the knowledge of personal biological relation to children that women naturally have.  Men lack the social power even to generate any serious social attention to that fundamental gender inequality.

[1] McGrady (1978), pp. 382-3, describes Pitas Payas’ change in occupations as a “blotch” in the story.  Id. notes that latter writings of the story eliminate Pitas Payas’ change in occupation.  Other writers seemed to have lacked the deep understanding of men’s lives that Libro de buen amor contains.  Variants of the story of Pitas Payas proliferated in European languages from the fourteenth century.  The earliest surviving version is that in Libro de buen amor.  Scholars have perceived a generic relation between the tale of Pitas Payas and Old French fabliaux.  Geary (1996).  Pitas Payas is somewhat similar to the noble knight with the troublesome wife in La Dame Escoilliee.

[3] Libro de buen amor, with characteristic contraposition and subtly irony, moves from the tale of Pitas Payas to exposition on the power of money.  The transition occurs through a man gaining a woman’s love through providing her material goods and money:

For some quite trifling bauble you may hold out in your hand,
She’ll serve you loyally, and do whatever you demand.
She’ll surely do for money anything you may ask.
But be it much or little, always give her what you can.

[4] Pitas Payas’ deferential, foolishly questioning response confirms his wife’s insinuation of his lack of masculine boldness and self-assertion. In the above translation, “head of meat” is my replacement for Daly’s phrase “beast to eat.”  The former seems to me to better convey the contextual tone.  The underlying Old Spanish is “manjar.”  For the verse (483d) containing that phrase, Zahareas (2010), p. 829, includes the commentary, “es quizá un juego comico entre la carne o cabeza del carnero y la mala suerte (Morreale).”

[5] Zahareas (2000) argues that clerical celibacy and concubinage is a central historical layer for understanding Libro de buen amor.  That seems to me to miss the more general, more troublesome historical problem of men’s social subordination.

[image] Black sheep; thanks to Wikipedia and Sigurdas.